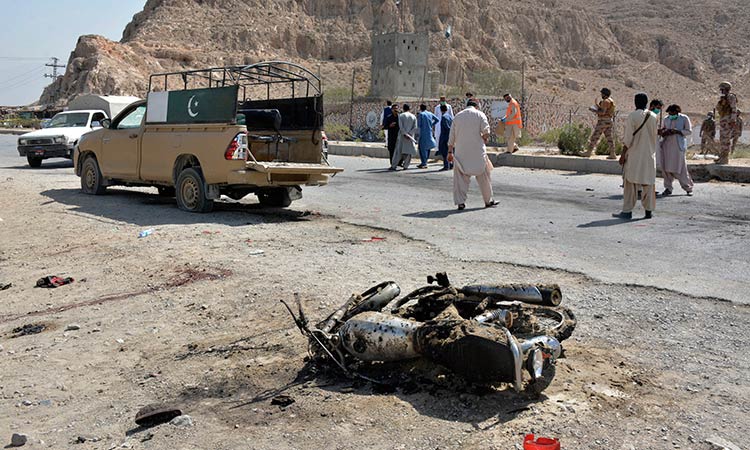 Security officials examine the site of suicide bombing in a checkpoint on the outskirts of Quetta, Pakistan, on Sunday. AP

At least four Frontier Corps (FC) personnel were killed and 19 injured when a suicide bomber rammed his motorbike into a vehicle of the security forces on Mastung Road near Quetta on Sunday, police said.

The incident took place early in the morning when the bomber hit his explosive-laden motorbike into one of the vehicles of the FC convoy, on the outskirts of the Quetta city, police said.

Police further said that the FC convoy was assigned to provide security to Hazara community’s vegetable traders near Pak-Afghan border area, and it was on its routine patrolling when it came under attack.

The injured including FC personnel and passers-by were shifted to a nearby hospital where several of them were said to be in critical condition, the rescue official said.

The Counter-Terrorism Department (CTD) and Bomb Disposal Squad (BDS) said that it was a suicide attack in which 5kg explosive material was used. 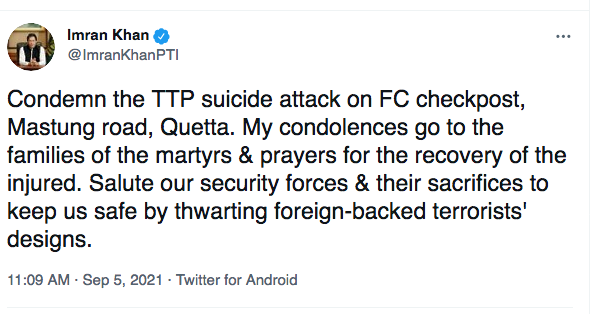 Prime Minister Imran Khan condemned the TTP suicide attack on FC convoy and extended condolences to the families of the martyrs.

Imran in a tweet posted on his social media handle expressed condolences with the families of the martyrs and prayed for the recovery of the injured.

The prime minister saluted security forces and their sacrifices to keep the masses safe by thwarting foreign-backed terrorists’ designs. 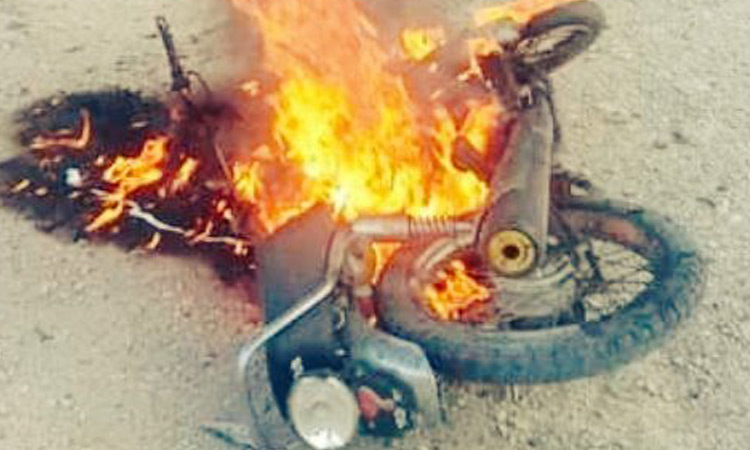 The bike used in the suicide attack.

Interior Minister Sheikh Rasheed has pointed out that the number of terrorist attacks in Balochistan, specially in Quetta, has seen an alarming uptick this year. "This is an attempt to put pressure on Pakistan,” he said. "Whoever is doing this should know it won’t affect the country and its spirits.”

In their separate condemnation statements, they said terrorists would not succeed in their nefarious plans. 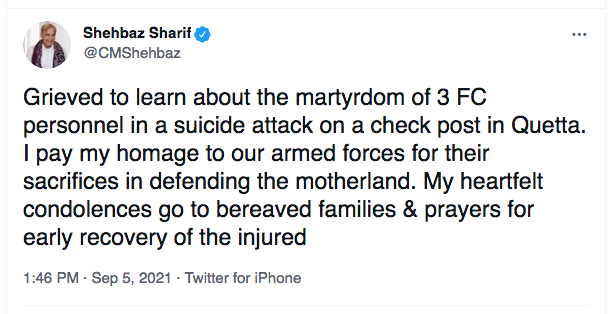 Opposition leader and Pakistan Muslim League Nawaz (PML-N) President Shahbaz Sharif said in a tweet that he was "grieved to learn about the martyrdom of the FC personnel" in the attack. 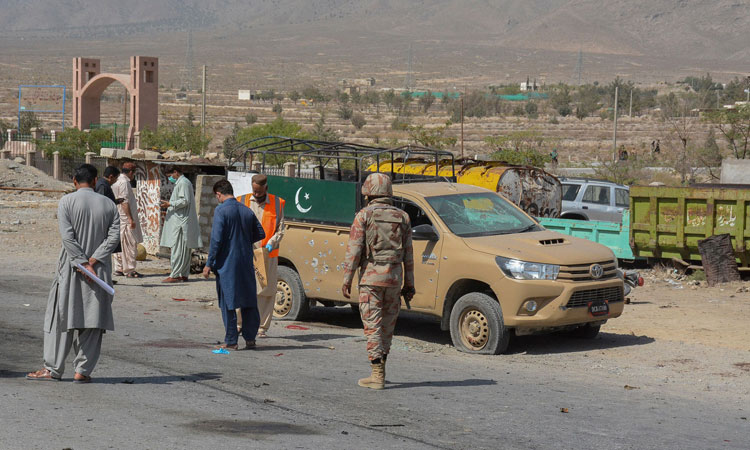 Security personnel examine the site of the blast near a checkpoint in Quetta. AFP

"I pay my homage to our armed forces for their sacrifices in defending the motherland. My heartfelt condolences go to bereaved families & prayers for early recovery of the injured," he tweeted. 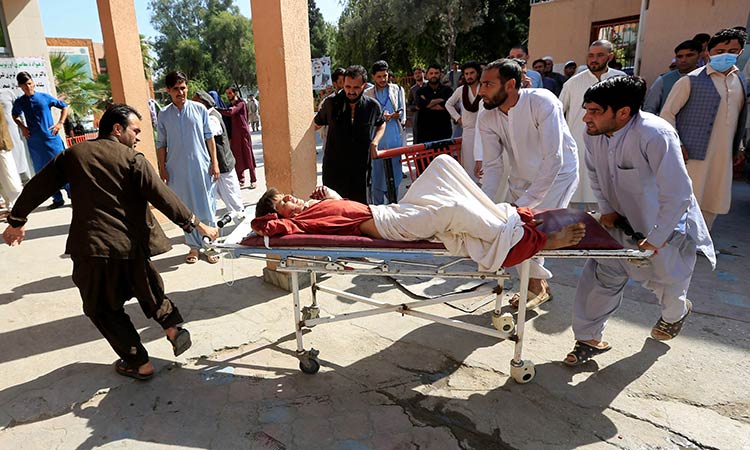 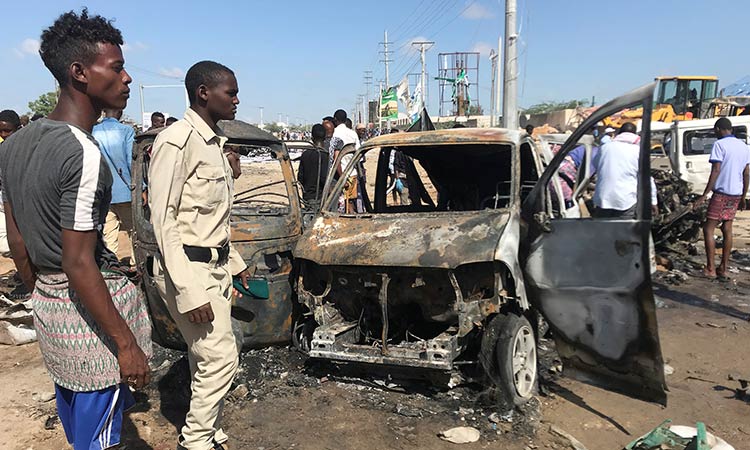 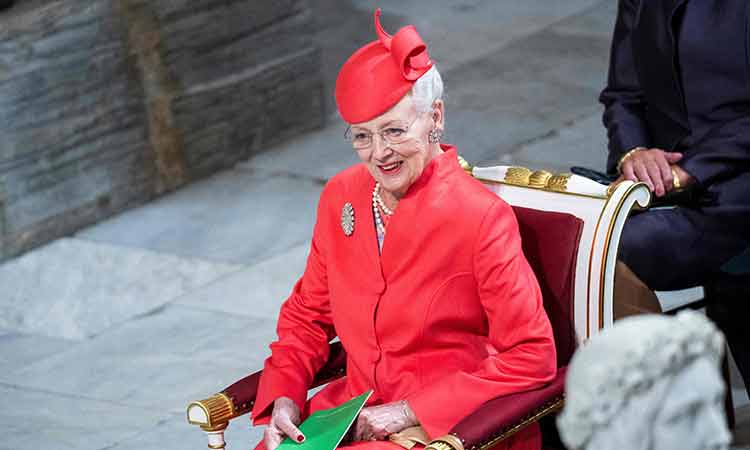