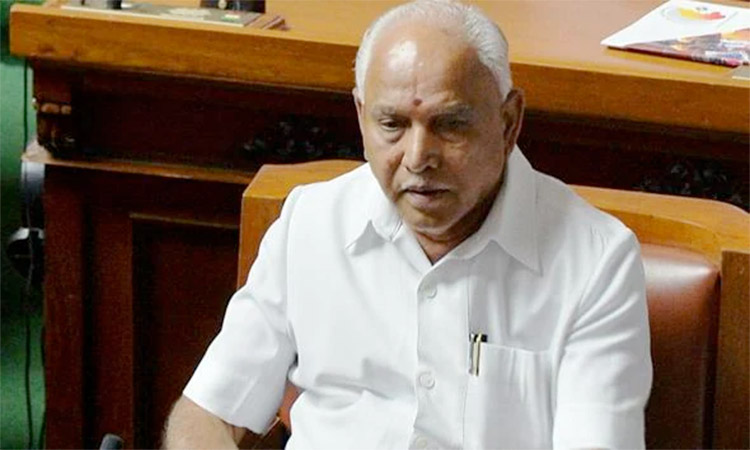 BS Yediyurappa sits in his chair before resigning from chief ministerial post at Vidhana Soudha in Bangalore. AFP

Karnataka Chief Minister B.S.Yediyurappa announced his resignation on Monday, categorically stated that there was no pressure from party high command to tender his resignation.

He has submitted his letter to Governor Thaawarchand Gehlot and will continue in politics serving the party organisation.

While delivering a speech at a function to mark completion of his two-years in office Yedyurappa, made the announcement teary-eyed. "I am resigning from this post. I am meeting the Governor Thavarchand Gehlot after lunch and submitting my resignation.

"I thank Prime Minister Narendra Modi and Home Minister Amit Shah for allowing me to continue even after 75 years of age. I will be involved in party building activities in future," he said.

Speaking after his visit to the Raj Bhawan, Interim Chief Minister Yediyurappa stated, he voluntarily took the decision to step down from the post to make way for a new CM in the state.

"I once again add that, there was no pressure from Delhi. I only decided to tender resignation on the occasion of completion of two years in office," he stated.

"Prime Minister Narendra Modi, party president J.P.Nadda and Home Minister Amit Shah have not forced me to take any decision," he stated. "I am doing this so that, the party could install a new face in the state as the CM," he added.