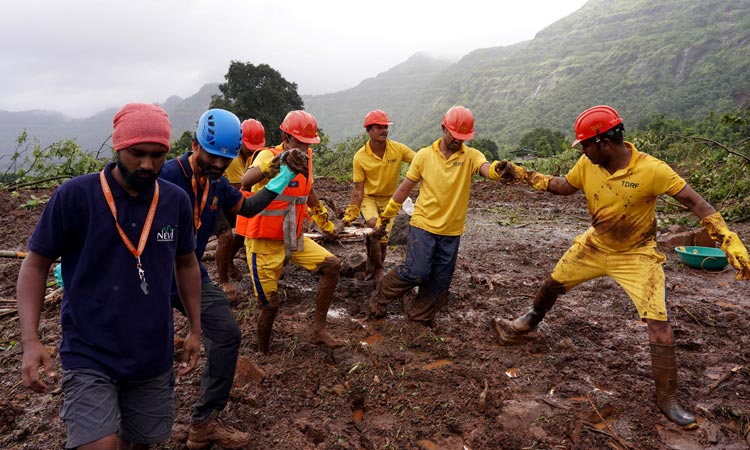 Rescue workers carry the body of a victim after recovering it from a site of a landslide in Raigad district, Maharashtra, India, on Saturday. Reuters

The death toll from monsoon-triggered landslides and building collapses climbed to 125 on Saturday, as the Indian rescuers waded through knee-deep mud in a grim search for survivors.

More than 135,000 people evacuated and dozens still missing, officials said. The monsoon rains have lashed western coast in recent days, sparking landslides near Mumbai and causing the worst floods in decades in the resort state of Goa.

Indian environmentalists have warned that climate change and indiscriminate construction in fragile coastal regions could lead to more disasters.

"Torrential rainfall in various parts of the state often coinciding with high tides and also discharge from dams led to various regions... getting inundated thereby resulting in floods across multiple districts", the Maharashtra government said in a press release. 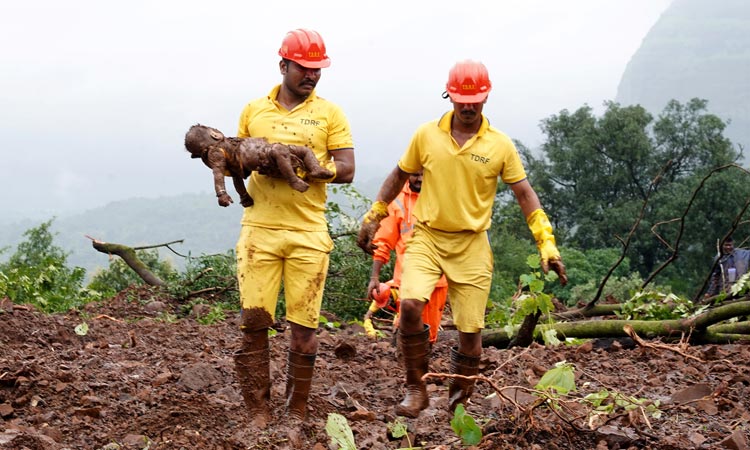 Rescue workers carry the body of a 7-month-old baby boy after recovering it from the site of a landslide in Raigad. Reuters

The downpour since Thursday caused a building to collapse in Mumbai and sparked several landslides, burying dozens of homes and leaving 59 people missing, the government said. 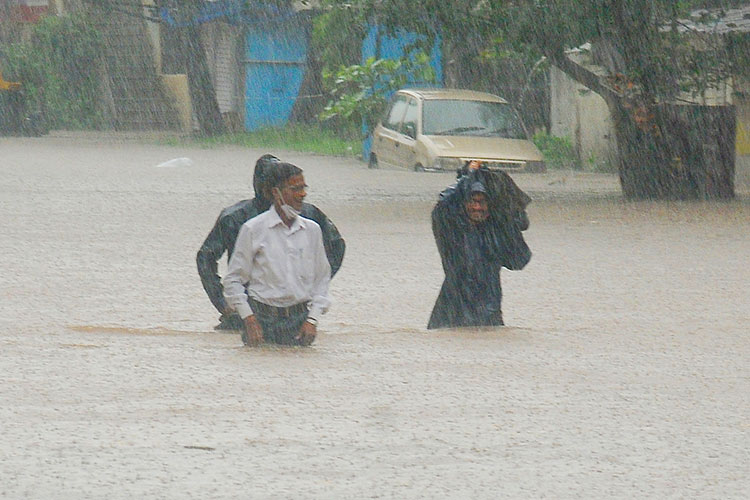 People wade through floodwaters in Kolhapur on Friday. AP


In a series of disasters and the season's worst tragedy, at least 50 people were buried alive in a hillslide at Taliye-Madhaliwadi village in Raigad, while another 50 are still feared trapped under the debris.

Besides, another 50-plus persons have perished in different rain-related incidents, including 15 in Poladpur (Raigad), 12 in Mirgaon (Satara), 11 in Khed (Ratnagiri), and in another half-a-dozen locations in Satara, and 4 in Mumbai. 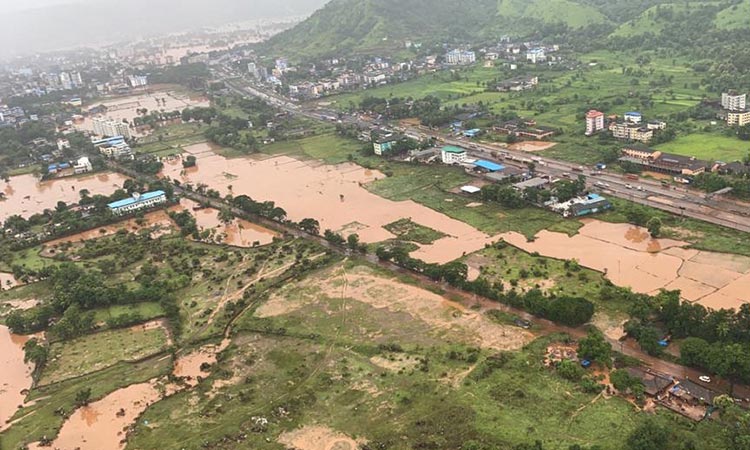 This photo shows the areas inundated with flood water after heavy monsoon rains in Raigad. AFP

Rescuers in India combed through mud and debris Saturday in a desperate search for survivors as the death toll from multiple monsoon-triggered landslides climbed to 45, according to officials.

As many as 68 others were missing after heavy rains lashed India's western coast, causing landslides that buried dozens of houses in hard-hit Raigad district, south of Mumbai.

Fifty-three people were missing, he said, with many feared trapped under layers of mud following the accidents. 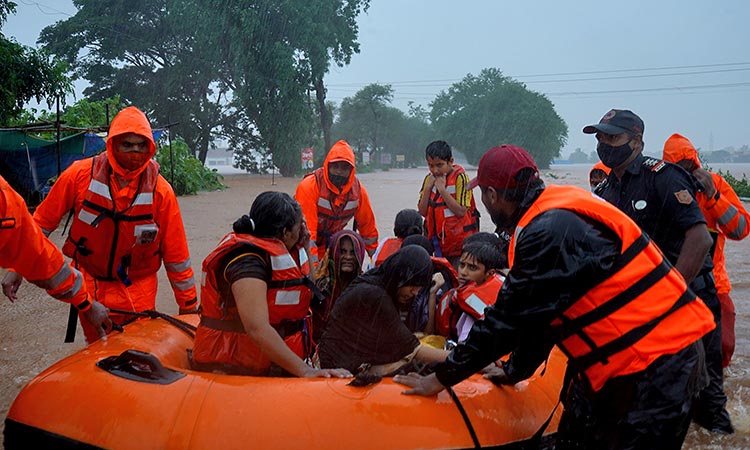 Expressing grief over the incident, Maharashtra Chief Minister Uddhav Thackeray announced a compensation of Rs 500,000 for the kin of each deceased person and free treatment for all the injured persons.

The CM said that the flood situation in various degrees of seriousness prevails in Raigad, Ratnagiri, Palghar, Thane, Sindhudurg, Satara, Kolhapur and Sangli. 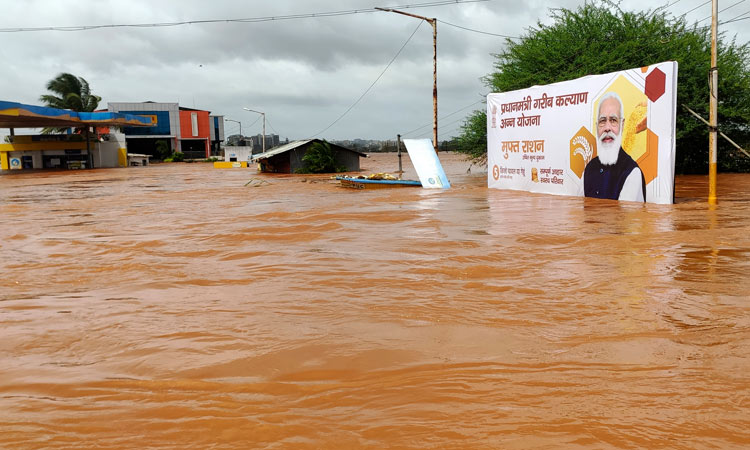 A billboard with a photograph of Narendra Modi is partially submerged in flood waters at Kolhapur. AP

In another heart-wrenching incident, at least 9 COVID-19 patients died after power supply to ICU ventilators suddenly snapped at a private hospital, prompting the CM to order the health department to take special precautions for the safety of Covid patients in all hospitals.

According to tentative estimates, over 2,000 big and small vehicles, including trucks, tempos, cars and scooters, were stuck or damaged in the floods and were seen piled up at various locations in the affected regions. 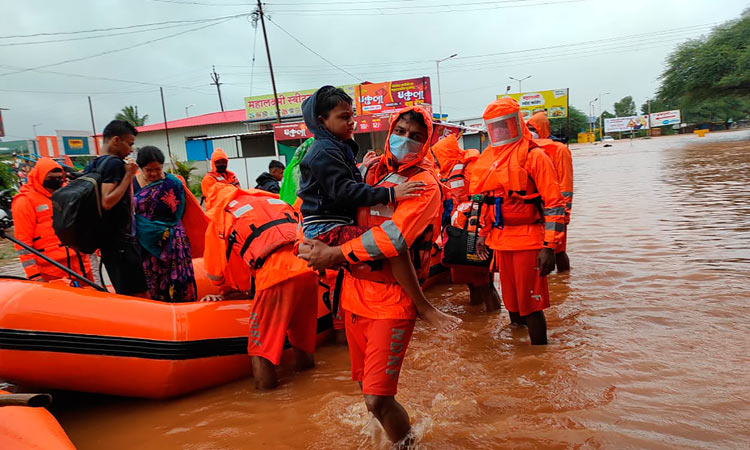 The power and communication departments are engaged in restoring power supply in many places which was either snapped or disconnected as a precaution, besides repairing the mobile towers to restore phone and internet services.