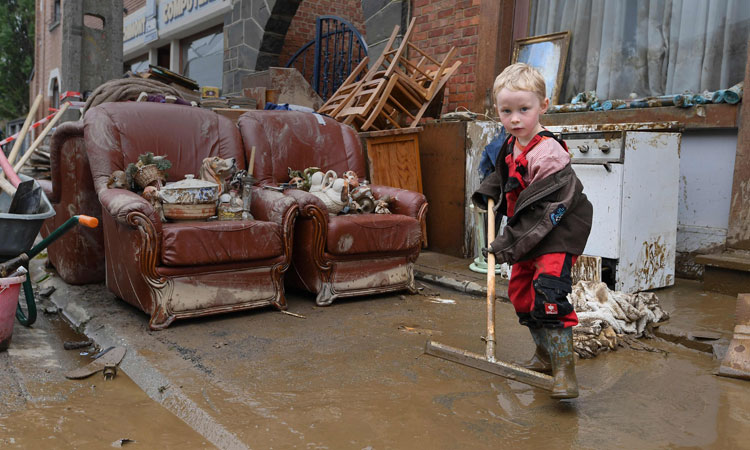 A boy helps clean-up outside his home following heavy rains and floods in the town of Rochefort on Saturday. AFP

The death toll from the heavy flooding that swept through parts of western Europe has passed 170 and thousands have been left homeless, as rescuers race to find survivors while hundreds remain missing. Rescue workers laboured to deal with damage laid bare by receding water and thoughts turned to the lengthy job of rebuilding communities devastated in minutes.

Homes have been covered in water and brought down in some cases and vehicles carried away by streams after rivers and reservoirs burst their banks.

Luxembourg and France has also been affected by flooding, which erupted amid relentless rain and storms. Some 141 people died in the flooding in Germany’s worst natural disaster in more than half a century.

That included about 98 in the Ahrweiler district south of Cologne, according to police. Hundreds of people were still missing or unreachable as several areas were inaccessible due to high water levels while communication in some places was still down. Residents and business owners struggled to pick up the pieces in battered towns.

A climate scientist at Imperial College London Ralf Toumi said, "Floods always happen, and they are like random events, like rolling the dice. But we've changed the odds on rolling the dice."

An earlier report said the German emergency teams were still searching for hundreds of missing people after the worst floods that caused dozens of deaths.

Scientists have long said that climate change would lead to heavier downpours. But determining its role in last week's relentless downpours will take at least several weeks to research.

The rescue workers toiled to clear up the devastation and prevent further damage.

Police said that more than 90 people are now known to have died in western Germany's Ahrweiler county, one of the worst-hit areas, and more casualties are feared. 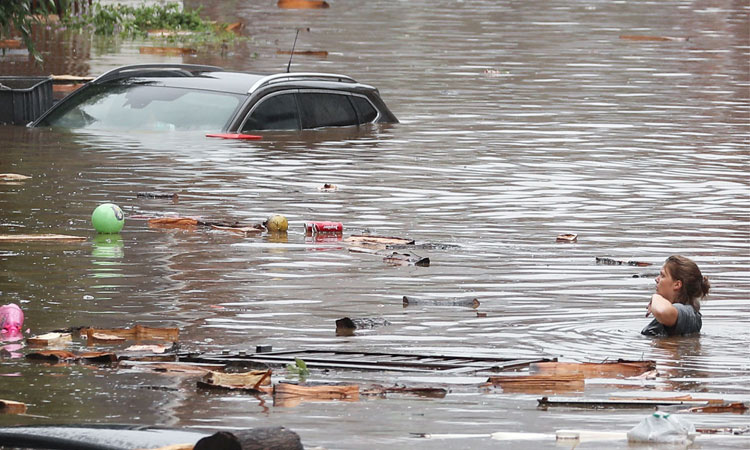 A woman trying to move in a flooded street following heavy rains in Liege, Belgium, on Thursday. AFP

Another 43 people were confirmed dead in neighbouring North Rhine-Westphalia state, Germany's most populous, and 20 others were killed across the border in Belgium.

By Saturday, waters were receding across much of the affected regions, but officials feared that more bodies might be found in cars and trucks that were swept away.

German President Frank-Walter Steinmeier planned to travel Saturday to Erftstadt, southwest of Cologne, where a harrowing rescue effort unfolded on Friday as people were trapped when the ground gave way and their homes collapsed. 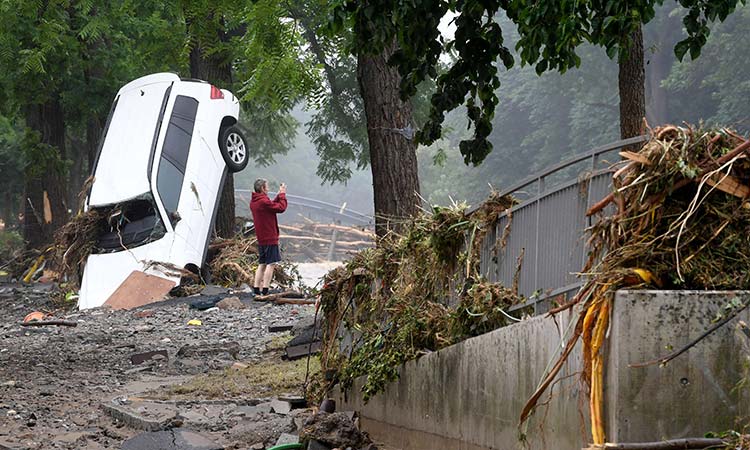 A man takes pictures of a devastated area after the floods in Bad Neuenahr-Ahrweiler, Germany. AFP

German Chancellor Angela Merkel, from Washington, where she met President Joe Biden, expressed her fear "that we will not be able to know the true extent of the disaster until the coming days."

The death toll in Germany has risen to at least 103. Germany's most read daily newspaper, Bild, headlined its front page "Floods of Death" after heavy rain fell in several regions of the country. 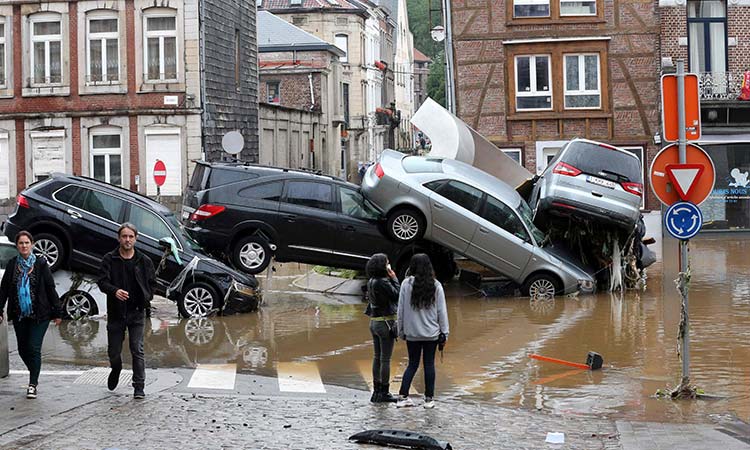 "We think there are still 40, 50 or 60 people missing. If you haven't heard it for a long time... you have to fear the worst," Regional Interior Minister Roger Lofitz told EWR radio. 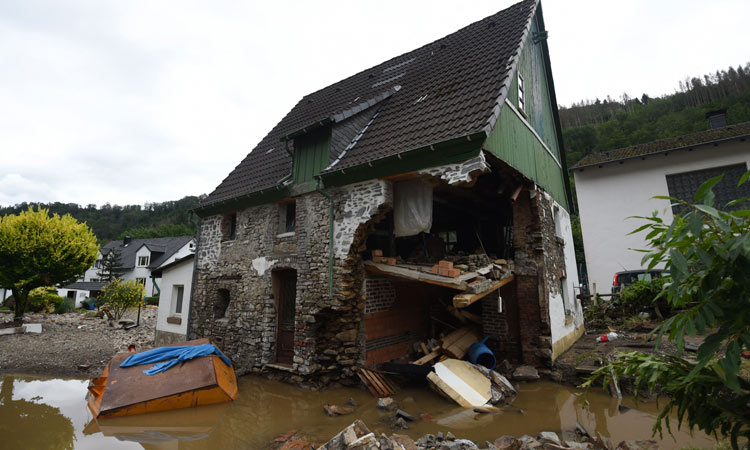 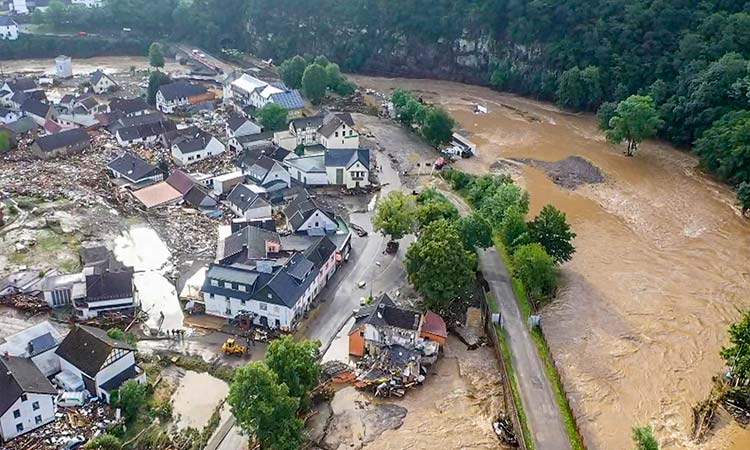 The city centre, which is usually neat and tidy, looks like a ruined square.

"My heart is with all those who lost their loved ones in this disaster and are concerned about the fate of people who are still missing," Merkel told reporters in Washington. 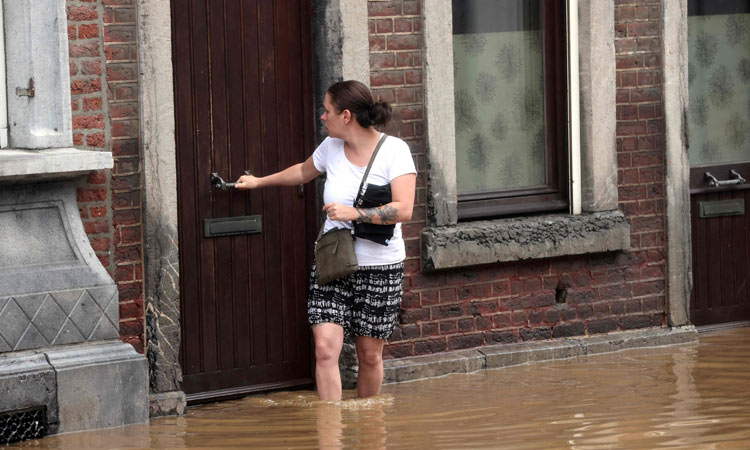 She explained that her government would not leave those affected "alone in their suffering," adding that it was "doing all it can to help them in their plight." 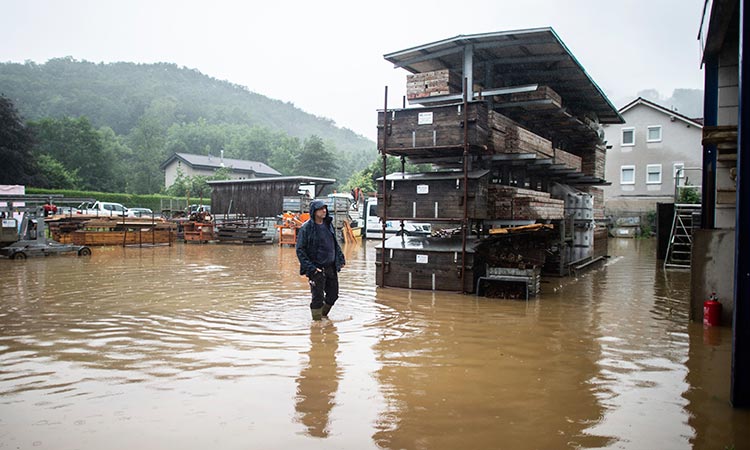 Storms have brought climate change back to the centre of Germany's election campaign ahead of elections scheduled for September 26, which will end Merkel's 16 years in power.