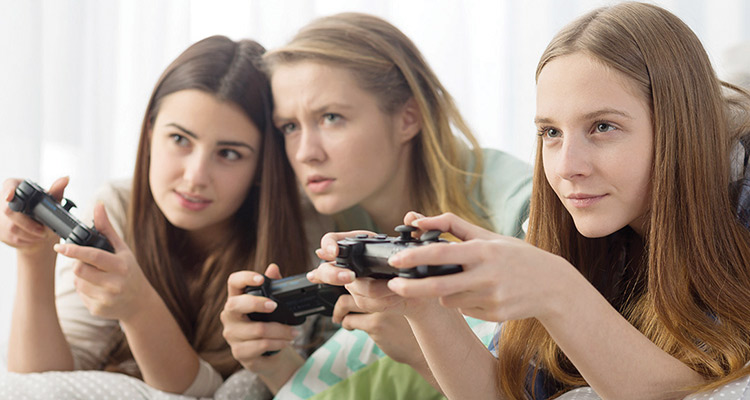 Many statistics indicate that the demand for electronic games has increased dramatically and remarkably in recent years on a daily basis, which poses a threat to children’s behaviour. It was proved also that electronic games in the virtual world steal children’s innocence, and slow their understanding of the real world around them.

These games have also become an obstacle to the child’s learning of some necessary behavioural skills which need concentration, analysis and follow-up.
On its part, the UAE works to protect the child by all means through a clear vision of the future of children. There are scientific and research centres to follow up on modern electronic developments.

The police have many stories of threats and extortion against children from unknown people on social media.

Among these, a 9-year-old Arab boy was blackmailed by someone in the chat rooms while he was playing the game “Fortnite” on social media, where the person tempted him with money through the game under the pretext of increasing his points and participating in higher stages of competitions. The suspect asked the victim to send his personal picture.

The second victim was a 10-year-old girl, who was threatened and blackmailed by an unknown person, after getting her own pictures through the chat room while she played a game. He reportedly communicated with her and blackmailed her through the pictures. The girl panicked to the point that she started thinking of stealing her mother’s money to provide him with cash.

The third victim was an 11-year-old girl, whom a person asked through the chat rooms of a famous electronic game, to photograph herself naked, and send him the pictures in return for money and more points in the game.

The fourth victim was an Arab girl who was threatened and blackmailed by someone she knew through a social networking site while playing a game. The girl paid that person money, and he continued to blackmail her and asked her for large sums of money.

Major General Expert Khalil Ibrahim Al Mansouri, Assistant Commander-in-Chief for Criminal Investigation Affairs at Dubai Police says, “Extortionists pretend they are children, trying to persuade victims to perform sexual acts or exchanging pictures and then threaten them with sending these pictures to the victims’ families and friends.”

Captain Abdullah Al Shehhi, Deputy Director of the Electronic Detective Department at the General Department of Criminal Investigation at Dubai Police, said, “Those who are blackmailed should immediately contact the police and report immediately via the “www.ecrime.ae” platform.

Al Shehhi called on the public to take several steps to protect them while being on the Internet, the first of which is to secure accounts on social networking sites, not to publish private data and information, not to communicate with strangers, and not to open anonymous links which are received on the phone or through personal email.

An earlier report said Abu Dhabi Police have issued a fresh warning to residents about growing incidents of online cybercrimes, including blackmail, bullying, and extortion.

The Police advised youngsters to steer clear of accepting online friendship requests from strangers and to be wary of dating sites and applications.

Police have also urged caution against children falling prey to online blackmailers. They post fake pictures of young women on social media platforms to lure youngsters and ask for their personal information in a bid to blackmail them.

Police urged parents to monitor their children’s online activities to avoid a recurrence of these untoward incidents and be vigilant about the social media content that the kids consume.

“Parents should discourage their children from interacting with strangers online and avoid sharing their personal information with any unknown person,” the statement read.

He cautioned that scammers might pose as women to gain victims’ trust, and then use their personal photographs in a bid to blackmail them to extract money.
The public has been urged to report cybercrimes by making a call to the Aman service’s hotline number (8002626).