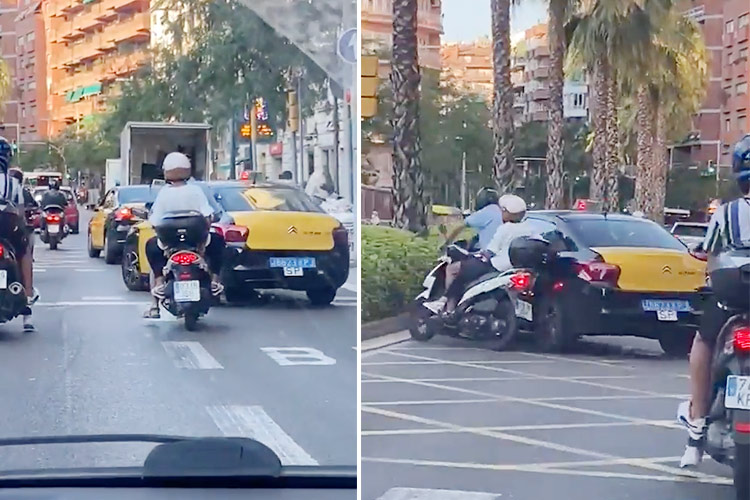 A combo image shows the taxi knocking down the motorcycle riders in Barcelona.

A Barcelona taxi driver could lose his licence after a video on social media showed him ramming a motorcycle in which two people are riding goes viral.

The footage was recorded in the Ronda del General Miter, one of the main arteries of Barcelona.

A witness said that before the incident, the rider and the taxi driver were arguing over a previous manoeuvre.

The video showed the taxi driver swerving to the left with the intention of knocking down the riders who were on the motorcycle, one of them a minor.

The taxi was carrying a passenger.

The two people who were riding on the motorcycle suffered only minor injuries, but the police are already investigating what happened and managed to identify the taxi driver thanks to the collaboration with the Elite Taxi Union, which has also published an official statement to condemn what happened.

The text released by the Catalan taxi drivers' union reads as follows, "We strongly condemn this fact as it could not be otherwise, it is an improper procedure on the part of any driver and much more, on the part of a professional at the wheel.

“There is no type of excuse or mitigating that could justify something like this, because there are laws that must be respected in any circumstance and because the physical integrity of people is above any other consideration.”