VIDEO: 1 killed, three injured after overspeeding car flips in the air and crashes into a shop in Saudi Arabia - GulfToday

VIDEO: 1 killed, three injured after overspeeding car flips in the air and crashes into a shop in Saudi Arabia 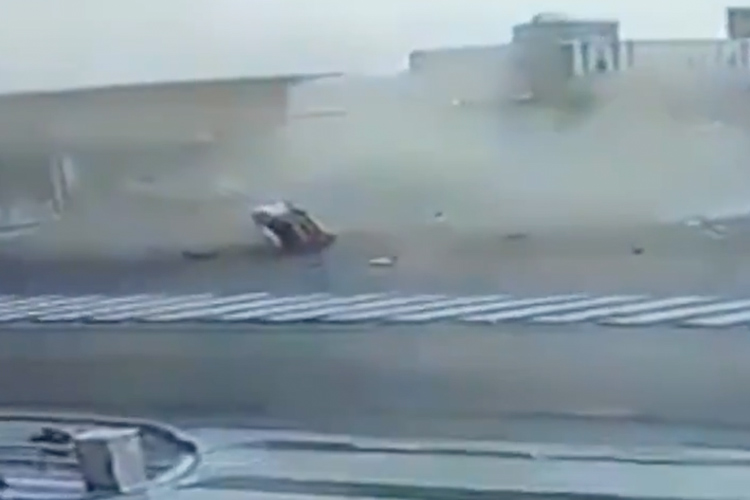 A videograb shows of the accident site.

In a tragic accident, one died and three people were injured in Saudi Arabia.

Sources in Saudi said the two overspeeding vehicles lost control and rolled over several times and crashed into a local shop.

A local media said, Death of one person and the injury of three others in a terrible traffic accident between two vehicles."

A video clip shared on social media showed the overspeeding cars losing control and colliding with each other before one crashed into a commercial store.

The other car turned turtle in the middle of the road.

Saudi authorities said that one died on the spot while the injured were rushed to a nearby hospital for treatment.

COVID-19 beta strain responsible for spike in infection in UAE

The Saudi Police have launched an investigation into the incident.

The police have urged youths to refrain from such activities that endanger their lives and the lives of other road users.

The police said that hefty fines would be slapped followed by jail for anyone who indulges in racing and performing stunts in the streets.

In May, a body of a man was found on the roof of a mosque hours after he met with a terrible traffic accident.

The man’s car flipped over in the air and was completely crushed with the impact.

Police said overspeeding was the reason behind

the accident. The vehicle was on the yard of a house.

The police said that another person was seriously injured in the accident.

Local residents, along with emergency experts, brought down the body from the roof of the mosque.

The body was taken to a hospital, and the funeral took place later.