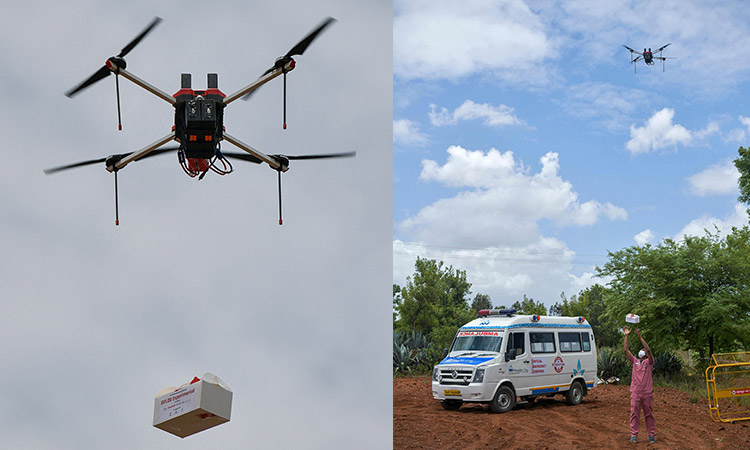 A paramedic waits to collect supplies from a drone belonging which flies Beyond Visual Line of Sight (BVLOS) to deliver life saving medical supplies. AFP

An aviation firm has carried out the first tests in India of longer-range drone deliveries, as hopes grow that they could deliver medicines as well as COVID-19 vaccines to remote areas.

Greater use of drones could be a game-changer for medical services in the South Asian nation's hard-to-reach rural areas where healthcare is limited and roads often poor, experts say.

Throttle Aerospace Systems is among 20 organisations granted permits by the government since May to conduct experimental flights beyond the current limit of 450 metres.

Two drones — one that can carry up to one kilogramme  for 20 kilometres  or nearly an hour, and another that can lift two kilos for 15 kilometres — were tested on Monday in the southern state of Karnataka. 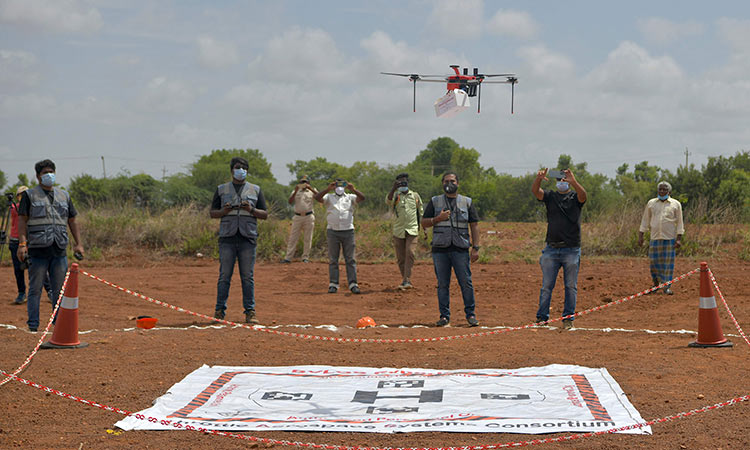 Technicians flies a drone during a flight testing at Gauribidanur. AFP

"Medicines was the payload here and... 2.5 kilometres were covered in seven minutes and it delivered the medicines at the designated point and the drone returned," Throttle's co-founder, Sebastian Anto, told AFP at the test site in the southern state of Karnataka.

The government this month also invited bids from drone operators to help set up a pilot project for the delivering of medical supplies as it seeks to bolster its faltering coronavirus vaccination drive.

The closing date for expressions of interest was Tuesday, although the government has yet to announce when such projects would become operational.

The epidemiology chief of the Indian Council of Medical Research, Samiran Panda, told The Hindu daily newspaper that the technology could help vaccinate priority groups in hard-to-reach places.

"We need smart vaccination instead of mass vaccination to stem an epidemic," Panda told the newspaper last week. India lags behind many other nations when it comes to drones — or Unmanned Aerial Vehicles — both in terms of their uses and the regulatory framework.

Under current regulations, they have to be flown in full view, or within 450 metres, of their operators on the ground. In Germany, researchers are reportedly testing drone prototypes that can track down disaster victims by their screams.

In Australia, drones using artificial intelligence algorithms are being used to spot crocodiles and count koalas in rugged terrain.India, home to 1.3 billion people spread across some 3.2 million square kilometres, is the world's seventh-largest country by land mass.

"drone technology would have a huge impact in those areas where emergency medicines and vaccines could be supplied," co-founder of lobby group the drone Federation of India, Vipul Singh, said.

"Where it takes a few hours to travel 20-30 kilometres by road, whereas a drone can actually travel that distance in 10 to 15 minutes," said Singh, also the co-founder of Bangalore-based Aarav Unmanned Systems. 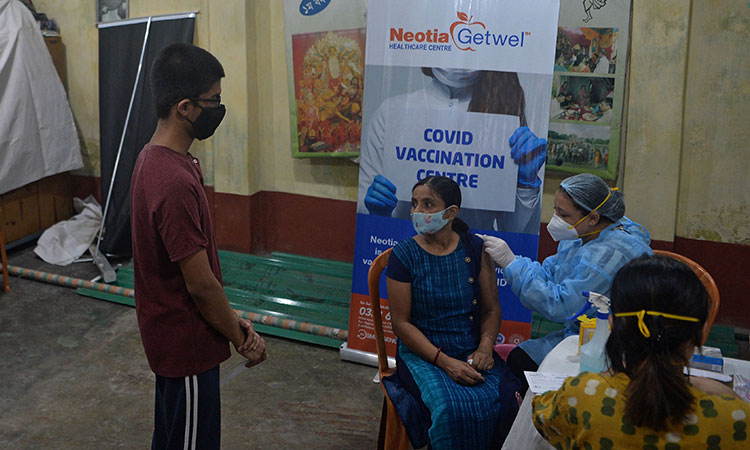 According to an official, the pace of the fall in coronavirus cases has slackened, which has raised a red flag for the government.