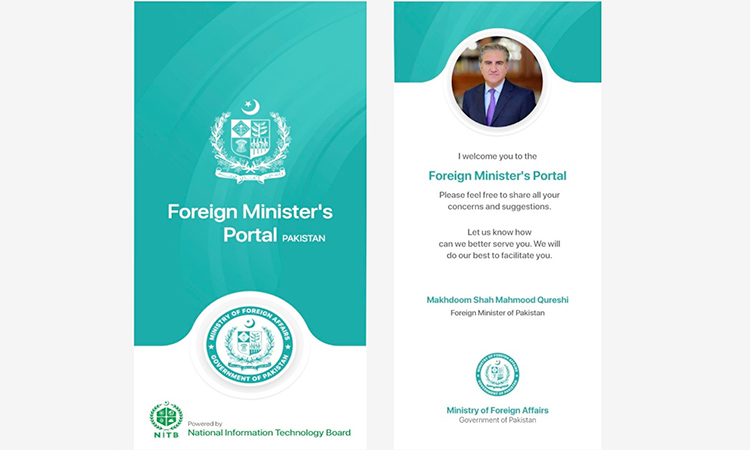 The portal has been crafted with the aim of strengthening the relationship between overseas Pakistanis and missions.

The government of Pakistan will soon be launching a special gateway "Foreign Minister's Portal Pakistan" to strengthen the relationship between overseas Pakistanis and missions in the form of feedback, complaints and suggestions.

"I will soon be launching the #FMPortal under #VisionFO thought leadership platform," Foreign Minister Makhdoom Shah Mahmood Qureshi said in a tweet.

"The portal has been crafted with the aim of strengthening the relationship between our overseas Pakistanis and missions in the form of feedback, complaints & suggestions," he added.

In its pilot phase, FMPortal will be introduced to missions and diaspora in Jeddah, Dubai, Barcelona, London and New York. It will then be scaled to include all missions, Qureshi said.

"I am looking forward to personally engaging with diaspora feedback and suggestions for more efficient service and progress," he went on to say.

In April 2021, the workers’ remittances rose to an all-time monthly high of $2.8 billion, 56 percent higher than the remittances of the same month last year, according to the State Bank of Pakistan.

These remittances surpassed previous records, reaching to $24.2 billion during the first ten months of the current fiscal year, showing growth of 29 percent over the same period last year.

The Pakistani expatriate community in the UAE and Saudi Arabia were among the top contributors towards remittances.

Foreign Minister's Portal Pakistan is indigenously designed and built by National IT Board. Its CEO Shabahat Ali Shah has said this is "one of the most important platforms #FMPortal for overseas Pakistanis to be launched by @SMQureshiPTI in the next few weeks."

"The objective is to resolve all complaints right at the doorstep of our diaspora," he said in a tweet.