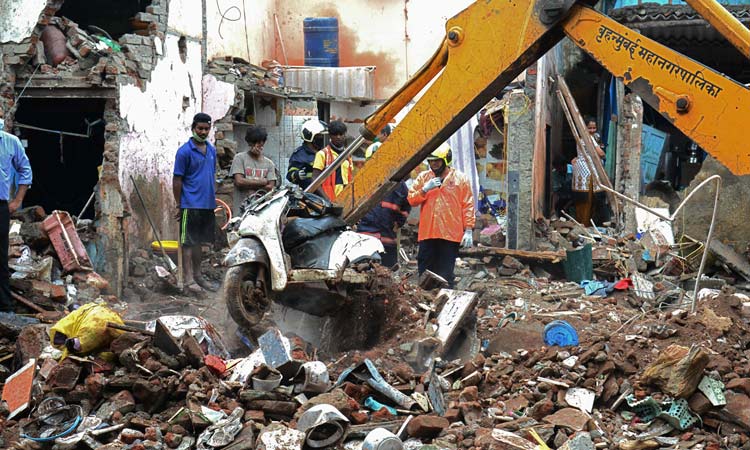 Rescue personnel search for survivors in the debris of a building that collapsed following heavy monsoon rains in Mumbai on Thursday. AFP

In the first major monsoon-related tragedy, a dilapidated building collapsed following heavy rains in the western Indian city of Mumbai, killing at least 11 people, including eight children, died and injuring seven others, police said on Thursday.

The incident occurred close to midnight in a northern suburb of Mumbai, officials said, adding that more people could be trapped inside the debris. 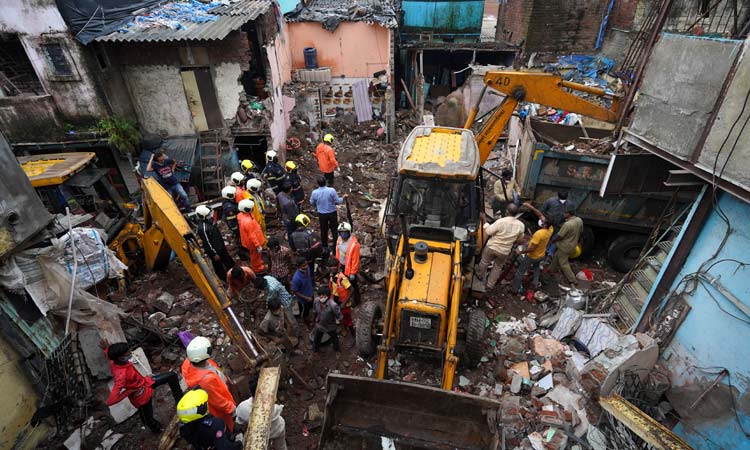 Rescue workers remove debris to search for survivors after a residential building collapsed in Mumbai. Reuters

So far, 11 persons have perished in the incident, comprising 9 from a single family, and after the locals raised an alarm that a few more may still be trapped under the huge mound of rubble, efforts were made to dig them out.

Heavy monsoon rains during the day on Wednesday had flooded several parts of the city that is India’s financial and entertainment capital.

The New Delhi Television channel said the building collapsed onto another structure in a slum in the Malad West area of Mumbai.

Residents joined the fire and police officers in rescuing people and they took the seven injured to a hospital in the suburban Kandivali area. Mumbai recorded 222 millimeters (8 inches) of rain in 12 hours on Wednesday. 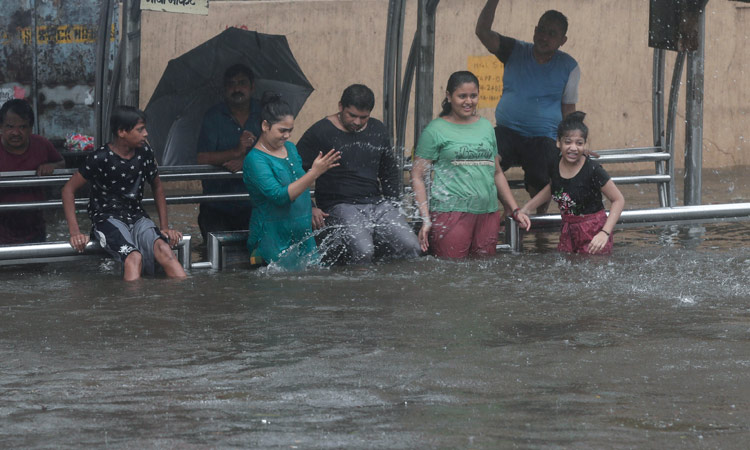 Children play near a flooded bus stop during heavy rains in Mumbai. AP

Tidal waves that reached up to 4. 6 metres (13 feet) prevented the rainfall from being drained, and roads, rail tracks and neighborhoods were left waterlogged.

Building collapses are common in India during the June-September monsoon season when heavy rains weaken the foundations of structures that are poorly built.

In a shocking incident, two women walking along a flooded footpath in Mumbai's Bhandup suddenly fell into an open manhole, as per the video going viral on Thursday and evoking outrage from city residents, 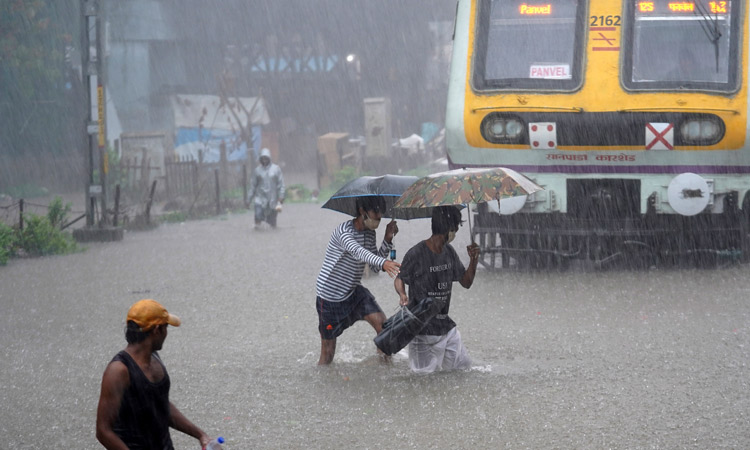 The incident happened on Wednesday evening when Mumbai was lashed by record heavy rains and many parts were inundated, leading to suspension of even the suburban trains for several hours.

A CCTV grab showed the two unidentified women, walking along the pavement while shielding themselves with an umbrella in the rains, and the next moment plonking inside the same open manhole, at brief intervals.

Fortunately, they could be seen again getting up, apparently unhurt, and slowly moving away from there, but the Brihan Mumbai Municipal Corporation was whacked on social media for its negligence.

As the CCTV footage went viral, Mayor Kishori Pednekar rushed to the spot for an assessment. 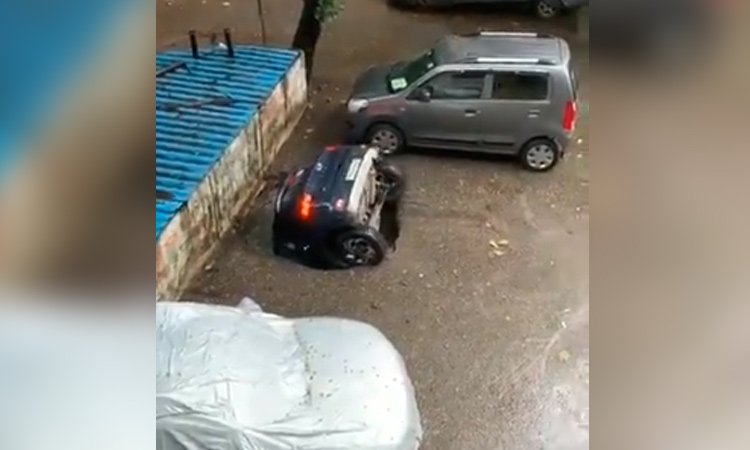 
The car, belonging to local resident Kiran Doshi, could be seen slowly falling, front-forward, into the large, muddy water-filled hole, bobbing for a few seconds before disappearing entirely, as CCTV footage showed. 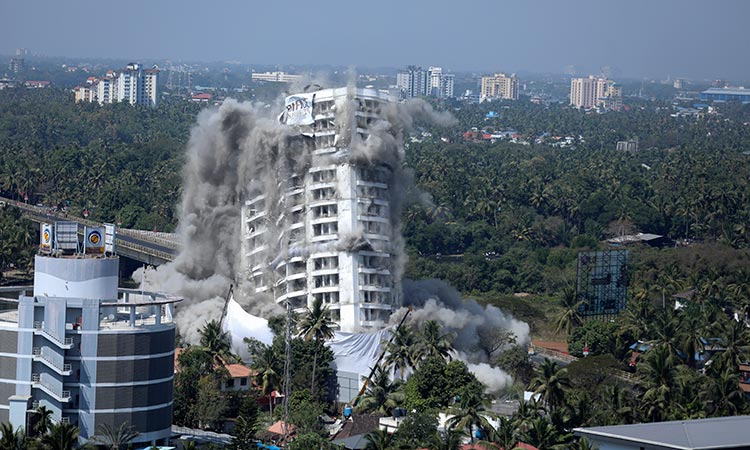 It’s a wonderfully executed job. H20’s demolition was perfectly done. No debris went into the water, and they all fell well within its compound, says district collector S. Suhas. 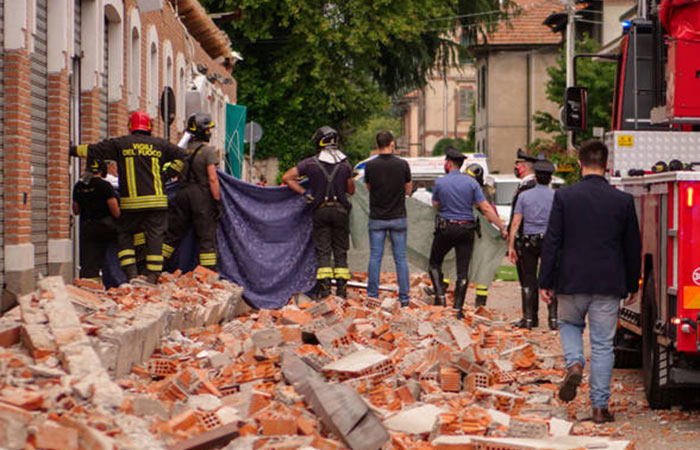 The accident occurred Wednesday in the town of Albizzate, on the outskirts of Milan, when a cornice nearly 70 metres (230 feet) long suddenly fell from the one-storey building, crashing onto the street. 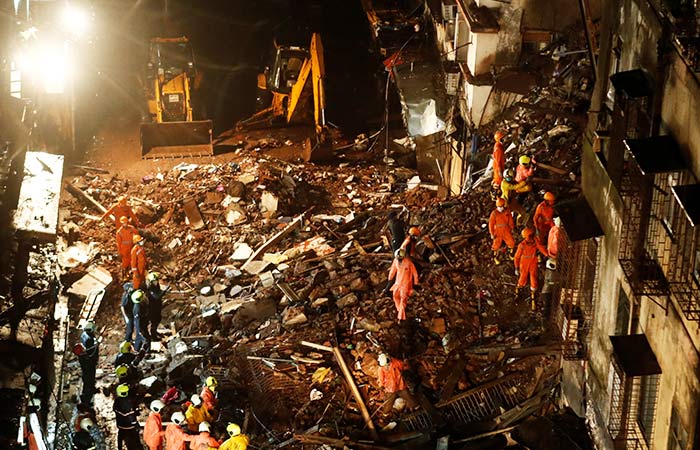 The dilapidated six-storey structure in the city's south was home to five or six families who stayed on after residents were advised to evacuate as it was under repairs.