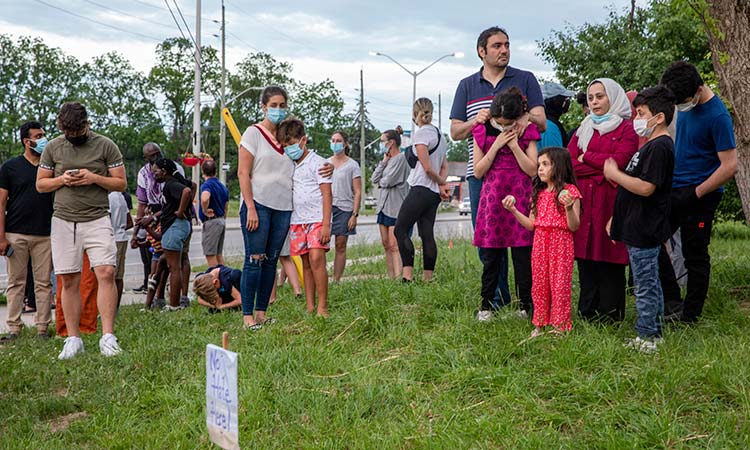 People attend a memorial at the location where a driver, in London, Ontario, hit a family of five on Monday. AP

A man driving a pick-up truck slammed into and killed four members of a Muslim family in Canada's Ontario province, in what police and officials said on Monday was a premeditated attack motivated by “hatred.”

A 20-year-old suspect wearing a vest "like body armor" fled the scene on Sunday evening, and was arrested at a mall seven kilometres (four miles) from the intersection in London, Ontario where the attack happened, said Detective Superintendent Paul Waight.

"There is evidence that this was a planned, premeditated act, motivated by hate. It is believed that these victims were targeted because they were Muslim," he told a news conference.

Canada's Minister of Public Safety Bill Blair described it as a "horrific act of Islamophobia."

"They believe the family was targeted because of their faith, and that the attacker was motivated by his hatred of Muslims," he said. 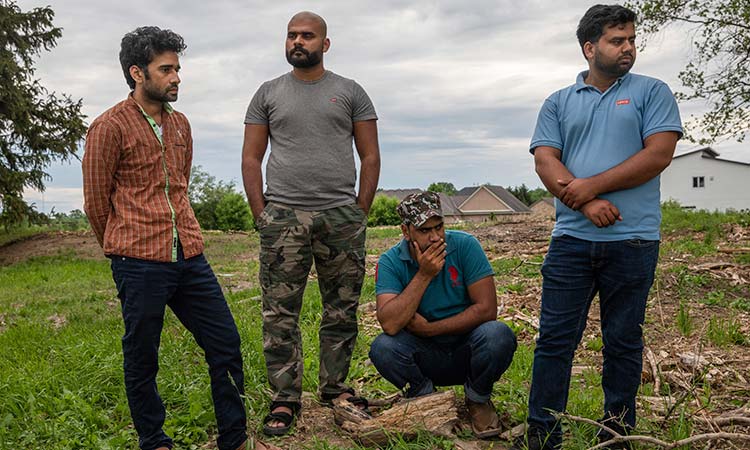 People attend a memorial at the location where a driver, in London, Ontario, hit a family. AP

The names of the victims were not released, but they include a 74-year-old woman, a 46-year-old man, a 44-year-old woman and a 15-year-old girl -- together representing three generations of the same family, according to London mayor Ed Holder.

A nine-year-old boy was also hospitalized following the attack and is recovering.

"Let me be clear, this was an act of mass murder perpetrated against Muslims, against Londoners, rooted in unspeakable hatred," said Holder.

Bouquets of flowers were seen at the scene of the attack. A vigil in memory of the victims is set to take place Tuesday at a local mosque.

The suspect, identified as Nathaniel Veltman, has been charged with four counts of first-degree murder and one count of attempted murder. 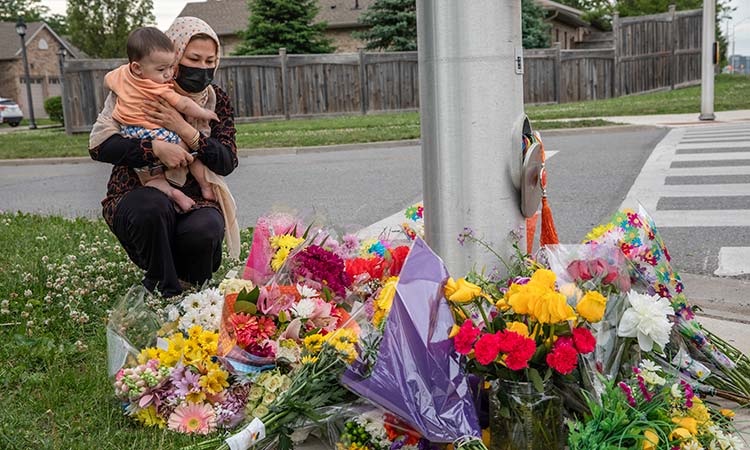 Nafisa Azima and her daughter attend a memorial at the location where a driver, in London, Ontario, hit a family. AP

Canadian Prime Minister Justin Trudeau tweeted that he was "horrified" by the attack.

"To the loved ones of those who were terrorized by yesterday's act of hatred, we are here for you," he said, singling out the nine-year-old in hospital.

"To the Muslim community in London and to Muslims across the country, know that we stand with you. Islamophobia has no place in any of our communities. This hate is insidious and despicable - and it must stop," he added.

At about 8:40pm on Sunday (0040 GMT Monday), according to police, the five family members were walking together along a sidewalk when a black pick-up truck "mounted the curb and struck" them as they waited to cross the intersection.

Waight offered few details of the investigation, but noted that the suspect's social media postings were reviewed by police.

The attack, which brought back painful memories of a Quebec City mosque mass shooting in January 2017 and a driving rampage in Toronto that killed 10 people in April 2018, drew swift condemnation. 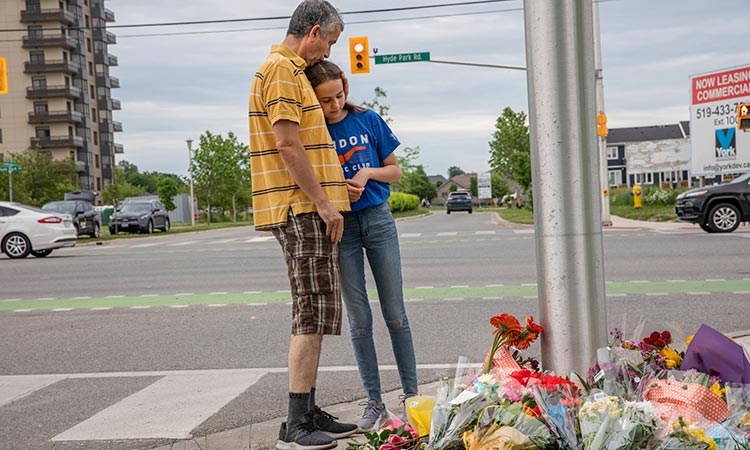 People attend a memorial at the location where a driver, in London, Ontario, hit a family of five on Monday. AP

The National Council of Canadian Muslims said in a statement it was "beyond horrified and demands justice" for the family who was just "out for a walk" on a warm spring evening.

"This is a terrorist attack on Canadian soil and must be treated as such," Mustafa Farooq, the council's president, told Radio Canada.

The Muslim Association of Canada also called on authorities to "prosecute this horrific attack as an act of hate and terrorism."

"Hate and Islamophobia have NO place in Ontario," tweeted Ontario Premier Doug Ford. "These heinous acts of violence must stop."

Four years ago, a 27-year-old white supremacist burst into a Quebec City mosque and unleashed a hail of bullets on worshippers who were chatting after evening prayers, killing six men and seriously wounding five others.

At the time, before the New Zealand mosque shootings in March 2019, it was the worst-ever attack on Muslims in the West.

The Quebec City shooter, Alexandre Bissonette, was sentenced to 40 years in prison, but that was lowered on appeal, and the Supreme Court is now reviewing his punishment.

Meanwhile in Toronto, a 28-year-old man who ploughed a rented van into pedestrians at high speed three years ago was found guilty in March of murdering 10 people and trying to kill 16 others.

Before that attack, Alek Minassian posted on Facebook a reference to an online community of "involuntary celibates" whose sexual frustrations led them to embrace a misogynist ideology. He will be sentenced in January 2022. 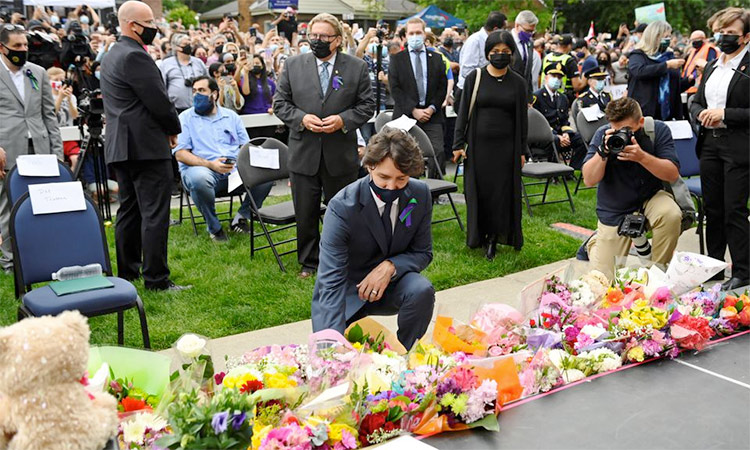 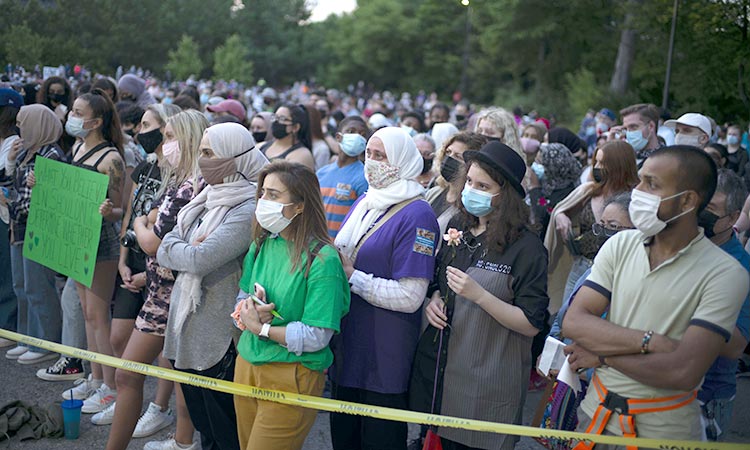 The demonstrators, who included families with children, banged on drums while others sang John Lennon's "Give Peace a Chance." They held posters with messages like "Hate kills" and "We're all human."