VIDEO: Woman spits on guard after being forced out of Harrods store for ‘not wearing a mask’ in London - GulfToday

VIDEO: Woman spits on guard after being forced out of Harrods store for ‘not wearing a mask’ in London 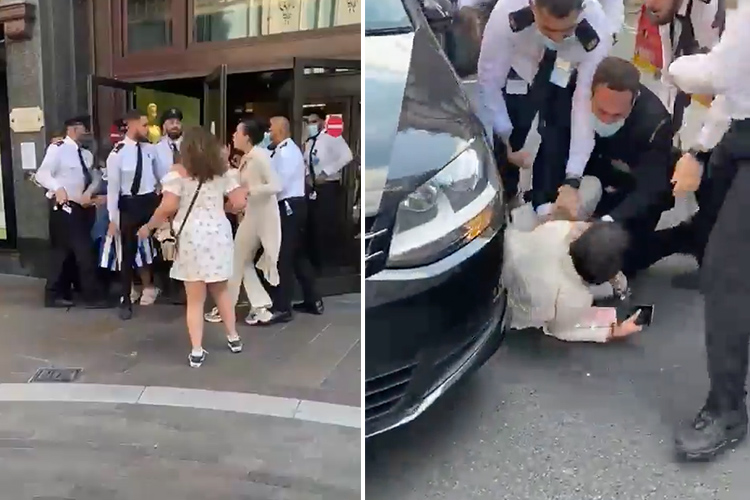 A combo image shows the brawl between women and security guards in London.

A violent brawl erupted between three women and 12 security guards at Harrods Department store in London, after the guards expelled them for refusing to wear face masks.

A video footage of the incident shows the guards escorting the women outside the upscale store, due to their failure to wear face masks, as is currently mandatory under the law imposed due to the coronavirus pandemic.

The quarrel continued in front of the building, where a guard appeared to drag one of the women who tried to kick a security officer, and one of them tried to free her friend from the hands of the guards, who seemed more aggressive.

One of the girls asked passersby to document the incident on video.

In the clip, one woman was seen spitting on the face of a guard, and running away, before the security men chased her and pinned her to the ground. One of the women’s screams could be heard in the video, and passers-by intervened to stop the dust-up.

A Harrods spokesperson said in a statement about the incident: "I am calling security, following complaints from a group acting aggressively inside the store."

He added, "The security tried to keep the women away, but they resisted strongly and responded with very aggressive behaviour, including spitting on the security officer," explaining that one of the women involved in the incident was detained. The identities of the women and the security guards involved are currently unknown.

Security guards under British law do not have statutory powers when it comes to detaining civilians, except in certain cases under the Police and Criminal Evidence Act 1984.