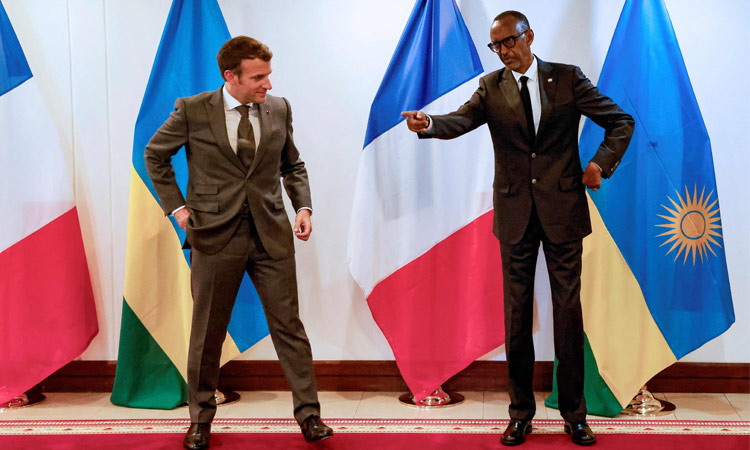 Emmanuel Macron and Paul Kagame ready to pose for photographers after their press conference in Kigali on Thursday. AFP

French President Emmanuel Macron on Thursday recognised his country's role in the 1994 genocide in Rwanda, as the two countries seek to turn the page on decades of diplomatic tensions over the bloodshed.

While Macron did not formally apologise, he highlighted how France had backed the genocidal Hutu regime of the time, ignored warnings of impending massacres and joined the world in abandoning some 800,000 mostly Tutsi Rwandans to a grisly fate.

"Standing here today, with humility and respect, by your side, I have come to recognise our responsibilities," Macron said in a speech at the Kigali Genocide Memorial. He said that only those who had survived the horrors can "give us the gift of forgiveness." 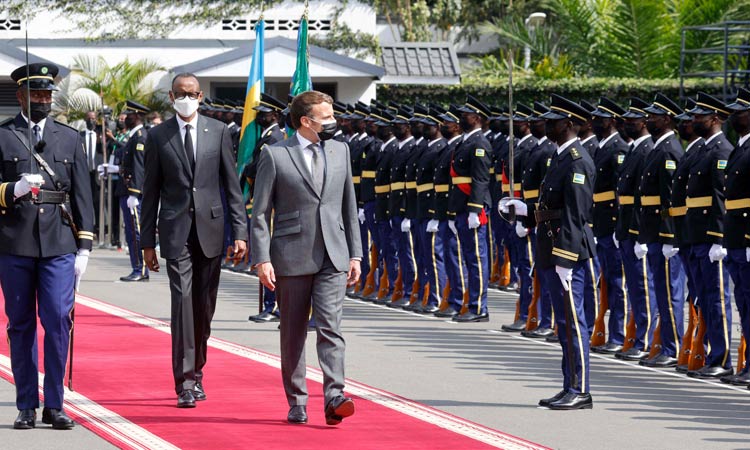 Paul Kagame (C) and  Emmanuel Macron (R) inspect the guard of honour at the Presidential Palace in Kigali. AFP

Rwandan President Paul Kagame, who called Macron his "friend", heaped praise on the speech at a joint press conference after the two leaders met.
"His words were something more valuable than an apology. They were the truth," Kagame said. "Speaking the truth is risky. But you do it because it is right, even when it costs you something, even when it is unpopular."

While some expressed regret that Macron did not apologise, the French president said it would not be appropriate to do so and that an apology is "not something I can give."

Macron is the first French leader since 2010 to visit the East African nation, which has long accused France of complicity in the killings.
Macron said France "was not complicit" in the genocide. "But France has a role, a story and a political responsibility to Rwanda. She has a duty: to face history head-on and recognise the suffering she has inflicted on the Rwandan people by too long valuing silence over the examination of the truth."

Genocide survivor Jean de la Croix Ibambasi watched the speech live on television with his 20-year-old son, saying he appreciated the recognition of France's role, but that Macron could have gone further.

He said he recalled the French working at checkpoints helping the then army "distinguish between the Tutsis and the Hutus." "We cannot forget that easily, we need to be honest, they have participated, they helped. It was time to say sorry, without going around it."

The genocide between April and July of 1994 began after Rwanda's Hutu president Juvenal Habyarimana, with whom Paris had cultivated close ties, was killed when his plane was shot down over Kigali on April 6.

Within a few hours extremist Hutu militia began slaughtering Tutsis, and some moderate Hutus, with a scale and brutality that shocked the world. Victims were felled with machetes, shot or massacred while seeking shelter in churches and schools, and sexual violence was rife.

France, which provided political and military support to Kigali during a civil war preceding the genocide, has long been accused of turning a blind eye to the dangers posed by Hutu extremists in a country which had already seen several large scale massacres in its past.

"In wanting to block a regional conflict or a civil war, (France) in fact continued to support a genocidal regime. By ignoring alerts from the most clear-headed observers, France assumed an overwhelming responsibility in a chain of events that resulted in the worst scenario," Macron said.

The question of France's role and responsibility in the genocide has burned between the two nations for decades, leading to a complete diplomatic rupture between 2006 and 2009.

In 2010 Nicolas Sarkozy attempted to break the ice by admitting to "serious mistakes" and a "form of blindness" on the part of the French during the genocide.
His remarks fell short of expectations in Rwanda, and the strains in bilateral relations continued to fester.

However, ties have warmed under Macron, who formed a commission to probe France's role in the genocide, which accused Paris of being "blind" to preparations for the genocide and said it bore "serious and overwhelming" responsibility.

To cement their rapprochement, Macron announced he would soon name a French ambassador to Rwanda, a role left vacant since 2015 because of the tensions.

Kagame said Macron understood that the global perspective on Africa needed to change from one in which the continent is seen as full of "bad actors", slamming a general "veneer of moral superiority" concealing racism.

"President Macron is someone who listens, and he is committed to supporting Africa based on what Africa itself has chosen. This is different, it is better, and it can last," Kagame said.

However while the two leaders celebrated their new relationship, Rwanda's opposition accused the French president of remaining indifferent to criticism of Kagame's record on human rights and tolerating dissent.

The French president leaves on Friday to South Africa for a visit devoted to the coronavirus pandemic and vaccine production. 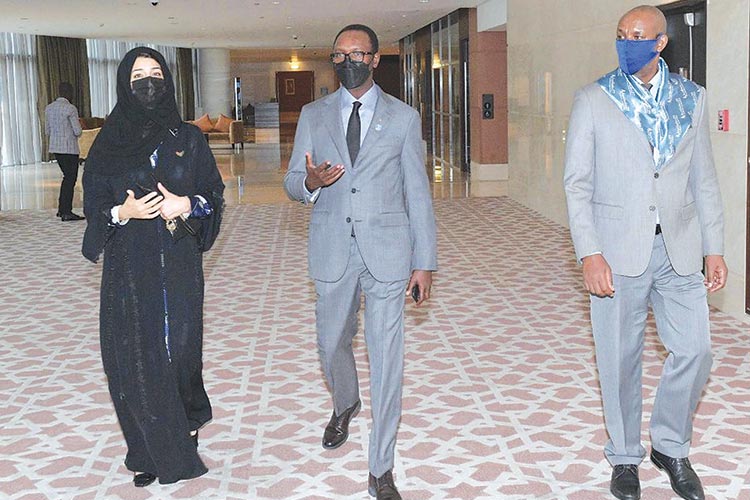 The 700-strong Rwandan communities in the UAE, Saudi Arabia and Bahrain observed the 27th year of the horrific Tutsi Genocide of 1994 on Friday in Dubai and in solidarity, UAE Minister of State for International Cooperation Reem Ebrahim Al Hashimy said such a cataclysm must never happen again.