Upto Dhs100,000 fine and one year jail for obscene acts in UAE - GulfToday

Upto Dhs100,000 fine and one year jail for obscene acts in UAE

The UAE Public Prosecution has warned people against performing any indecent act publicly in the country as they will be subjected to heavy fines and jail term.

Through its posts on its social media account the UAE Public Prosecution said that whoever publicly performs an indecent act shall be subject to a fine of not less than Dhs1,000 and not more than Dhs50,000.

It futher explained that according to Article (358) of the Federal Penal Code any repetition of indecent act in public shall be punishable by imprisonment for a period of not less than three months and a fine not more than Dhs100,000, or one of the two. 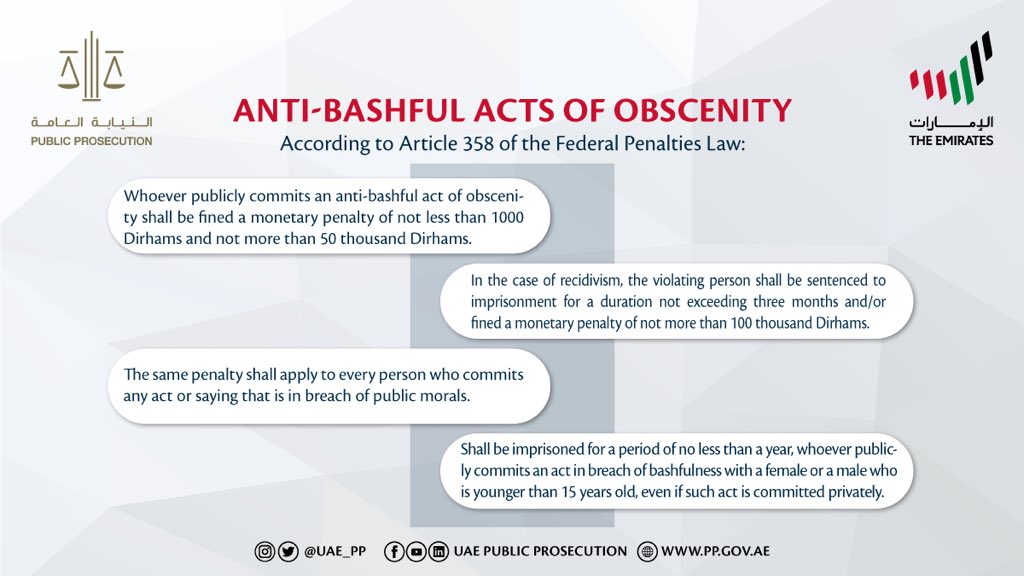 The same punishment shall apply to any person who makes any statement or does any act that violates the principles of public morality, it added.

"Whoever commits any disgraceful act with a female or a male aged less than fifteen, even in private place, shall be imprisoned for no less than one year," it continued.

The Public Prosecution is publishing these posts to heighten legal culture and awareness among members of the public.

People caught disclosing without authorisation online confidential information obtained in the course of, or due to employment, can face jail and up to Dhs1 million in fines, warned the UAE's Public Prosecution.