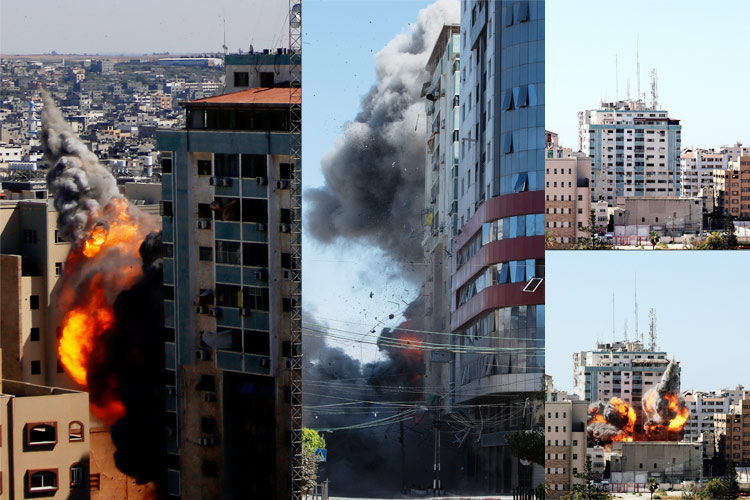 This combination of pictures created on Saturday shows, the Jala Tower in Gaza City after being hit by an Israeli air strike. AFP / AP

An Israeli air strike destroyed a high-rise building in Gaza City that housed offices of The Associated Press (AP) and other media outlets hours after another Israeli air raid on a densely populated refugee camp killed at least 10 Palestinians from an extended family, mostly children, on Saturday.

The strike on the high-rise came nearly an hour after the military ordered people to evacuate the 13-storey building, which also housed Al Jazeera, other offices and residential apartments. The strike brought down the entire structure, which collapsed in a gigantic cloud of dust.

The Associated Press said on Saturday it was "shocked and horrified" by an Israeli airstrike that destroyed a building housing the US news agency's Gaza bureau and those of other international news media.

"This is an incredibly disturbing development. We narrowly avoided a terrible loss of life," AP President and CEO Gary Pruitt said in a statement. A dozen AP journalists and freelancers had been in the building but were able to evacuate, Pruitt said. 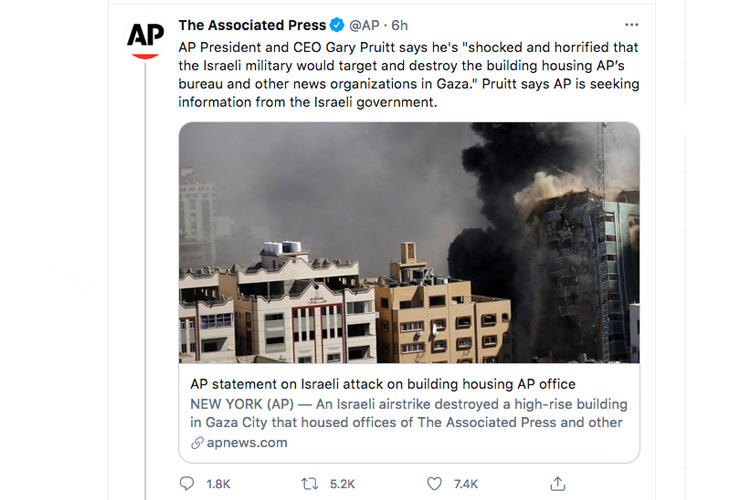 Meanwhile, the White House said it has cautioned Israel about the importance of protecting independent media. "We have communicated directly to the Israelis that ensuring the safety and security of journalists and independent media is a paramount responsibility," White House press secretary Jen Psaki tweeted.

Al Jazeera also said it would not be silenced. ''It is clear that those who are waging this war do not only want to spread destruction and death in Gaza, but also to silence media that are witnessing, documenting and reporting the truth of what is happening in Gaza,'' said Walid Al Omari, Al Jazeera's Jerusalem bureau chief. ''But this is impossible,'' he said on air shortly after the 13-storey Jala Tower in Gaza was obliterated. ''This is a crime among a series of crimes perpetrated by the Israeli army in the Gaza Strip.'' 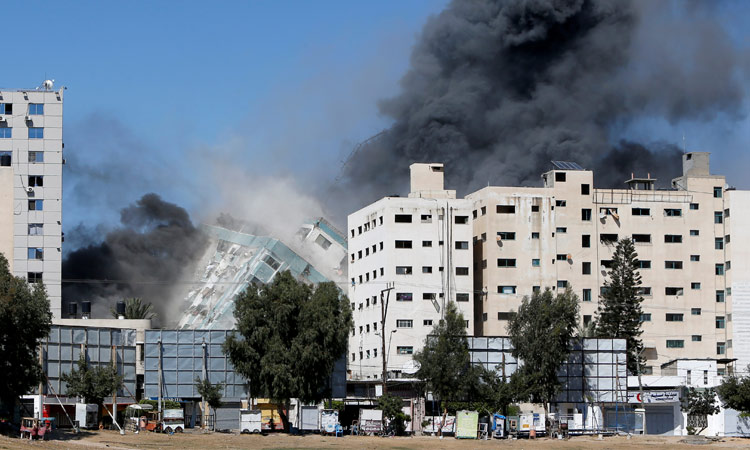 The Jala tower housing the offices of AP and Al Jazeera collapses after a missile strike in Gaza. Reuters

On the sixth day since the conflict escalated, the death toll rose and violence also swept the occupied West Bank as a US envoy prepared to hold talks with officials seeking a de-escalation.

Despite intensifying diplomatic efforts, Israel's fighter jets struck several sites in the densely-populated Gaza Strip which it has blockaded for more than a decade.

Balls of flame reached high into the sky as Israel's air force on Saturday afternoon flattened a 13-floor building housing Qatar-based Al Jazeera television and the Associated Press news agency in the Gaza Strip, after giving a warning to evacuate. 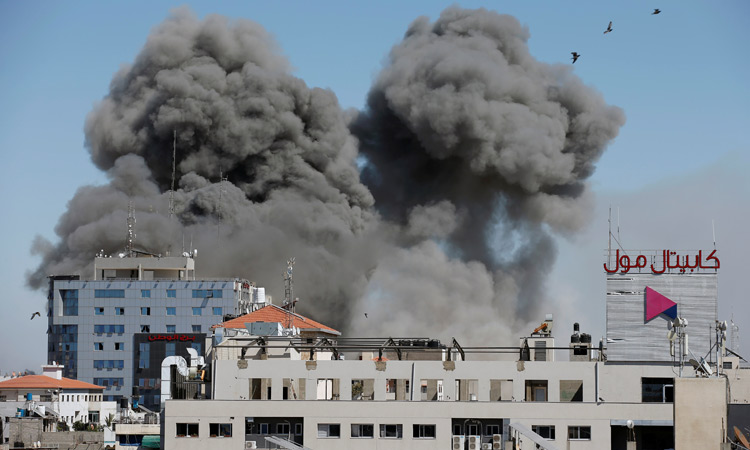 "Clearly there is a decision not only to sow destruction and killing, but also to silence those who broadcast it," Walid Al Omari, Al Jazeera head for Israel and the occupied territories, told AFP.

Jawad Mehdi, the owner of the Jala Tower, said an Israeli intelligence officer warned him he had just one hour to ensure the evacuation of the building.

Earlier, an Israeli strike on a three-storey building in the Shati refugee camp killed 10 members of an extended family — two related mothers and their four children each. 'Striking our children' Mohammed Al Hadidi said he had lost most of his family in an air strike in Gaza. "What did they do to deserve this? We're civilians," said the devastated father, whose surviving five-month-old baby was wounded in the explosion. "They are striking our children — children — without previous warning." 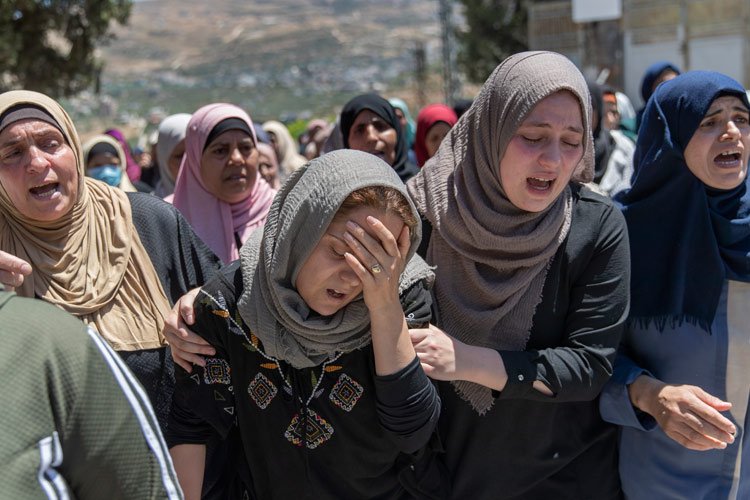 Mourners cry during the funeral of Husam Asayra, 20, in the West Bank. AP 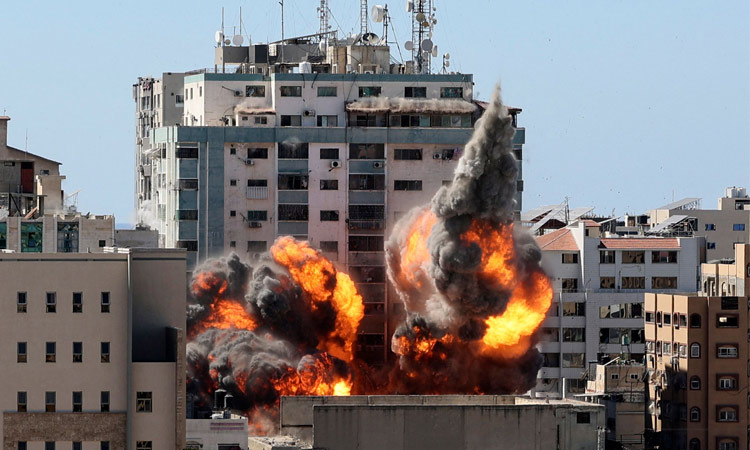 A ball of fire erupts from the Jala Tower as it is destroyed in an Israeli airstrike. AP

Washington has been criticised for not doing more to end the intensifying violence, after it blocked a UN Security Council meeting scheduled for Friday. Some 10,000 Gazans have fled homes near the Israeli border for fear of a ground offensive, the United Nations said.

"They are sheltering in schools, mosques and other places during a global Covid-19 pandemic with limited access to water, food, hygiene and health services, said UN humanitarian coordinator for the occupied territories, Lynn Hastings.

Kamal Al Haddad, who fled with his family to a UN-supported school in Gaza City, said: "All the children are afraid, and we are afraid for the children."