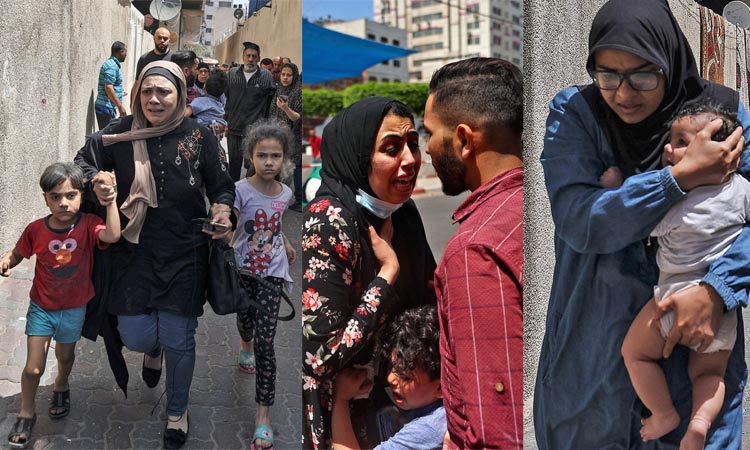 A confrontation between Israel and Palestinians sparked by weeks of tensions in contested occupied Jerusalem escalated on Tuesday as Israel unleashed new airstrikes on Gaza. Since sundown on Monday, 28 Palestinians — including 10 children and a woman — were killed in Gaza, most by airstrikes, health officials there said. 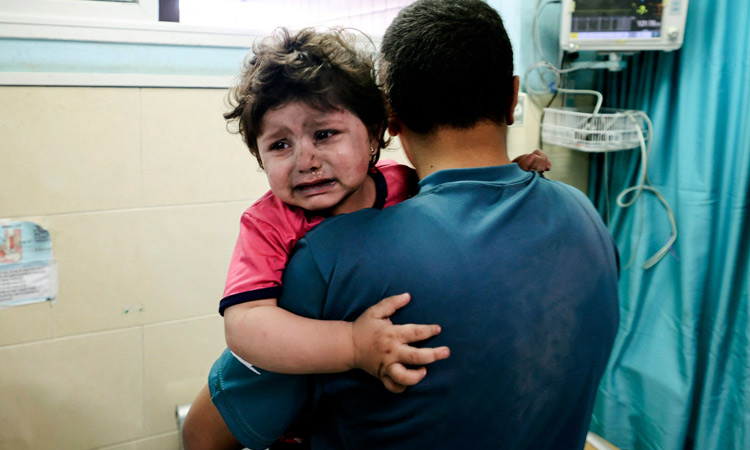 In a sign of widening unrest, hundreds of residents of Arab communities across Israel staged overnight demonstrations denouncing the recent actions of Israeli security forces against Palestinians. It was one of the largest protests by Palestinian citizens in Israel in recent years.

Two women were killed by rockets fired from Gaza that hit their homes in the southern city of Ashkelon — the first Israeli deaths in the current violence. After those deaths, Israeli Prime Minister Benjamin Netanyahu said officials decided to "increase both the strength and rate of the strikes” against Hamas and Islamic Jihad in the Gaza Strip. 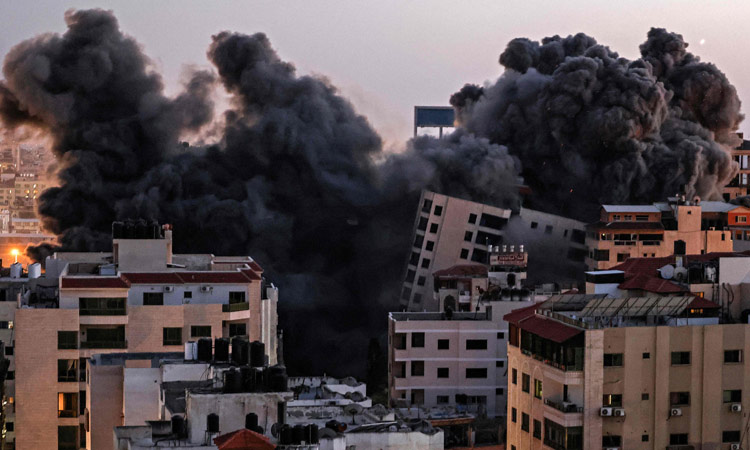 Smoke billows from an Israeli air strike on the Hanadi compound in Gaza. AFP

Late on Tuesday, Israeli airstrikes have demolished a 12-storey building in Gaza City that housed the offices of top Hamas officials.

A gathering of representatives of Muslim nations has condemned Israel for the outbreak of violence in the Al Aqsa Mosque compound.

The emergency meeting of the 57-member Organisation of Islamic Cooperation (OIC) was held on Tuesday in Jeddah, Saudi Arabia, to present a unified response from the Muslim world to the soaring tensions between Israel and the Palestinians and the latest violent confrontations in Jerusalem.

In a communiqué, the meeting denounced Israel’s "continuous violations” of the sanctity of Al Aqsa Mosque, "barbaric attacks” against worshippers and movement restrictions on Palestinians at the compound. It said that it considered the Israeli actions a "provocation of the feelings of Muslims around the world and serious violation of international law.”

It called on the international community to hold Israel liable for the escalation and to press it to halt attacks that threaten "the security and stability of the region.” It also reaffirmed the long-standing Arab stance of support for an independent Palestinian state with east Jerusalem as its capital. 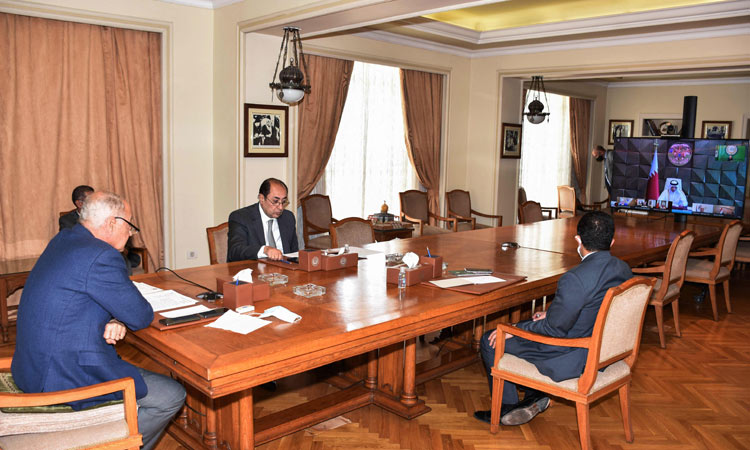 The head of the Arab League (AL) has blamed Israel for the escalation of violence in the Palestinian territories, warning that Israeli policies would blow up the situation in Jerusalem.

Ahmed Aboul Gheit, secretary-general of the 22-member organisation, spoke on Tuesday as Arab foreign ministers were meeting to discuss the latest bout of violence between the Palestinians and Israelis. 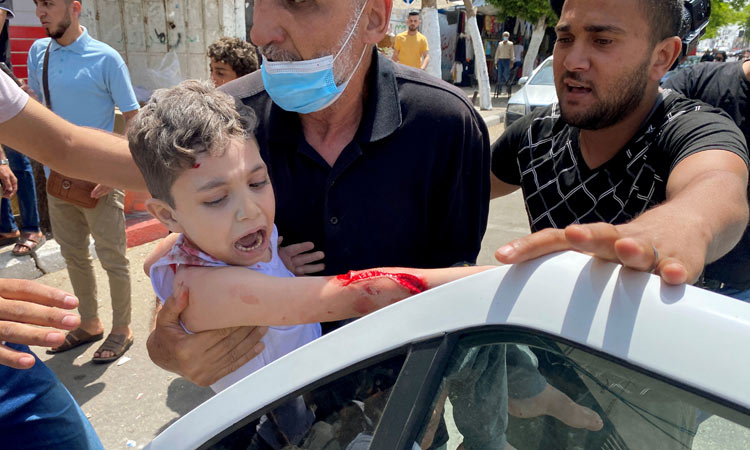 A wounded Palestinian boy is rushed to the hospital following an Israeli air strike in Gaza. Reuters

He decried what he called Israel’s provocative practices in the Al Aqsa Mosque compound and the planned eviction of Palestinian families from Sheikh Jarrah neighbourhood in east Jerusalem.

"What we have witnessed is, clearly and frankly, a provocation by the Israeli occupation, that targeted the holiest Islamic sanctities, at the most sacred time,” he said, referring to the Holy Month of Ramadan. He urged the UN Security Council to take action. 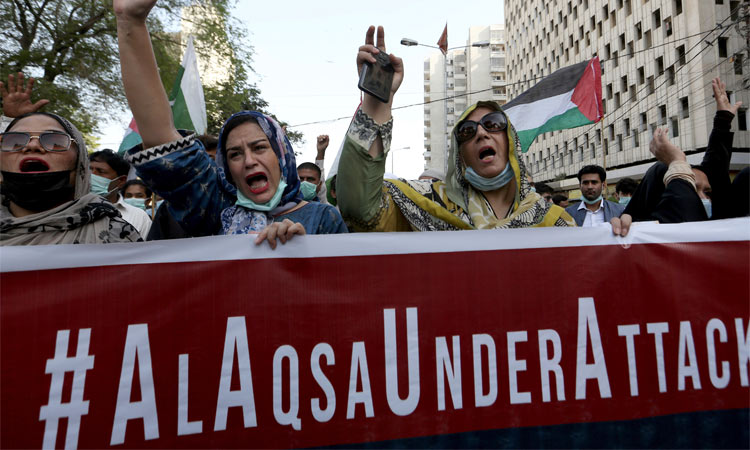 Pakistanis shout anti-Israeli slogans during a demonstration in support of Palestinians in Karachi. AP

Pakistan’s Prime Minister Imran Khan has denounced Israel’s use of force against Palestinians. Imran said  that he had asked his foreign minister to contact his Turkish and Saudi counterparts to discuss how to collectively respond. Earlier, Pakistan’s foreign minister Shah Mahmood Qureshi at a news conference urged the world community to take notice of Israel’s use of force against innocent Palestinians worshippers.

Dozens of Pakistanis have rallied in Karachi to condemn Israel’s use of force against the Palestinians.

Hundreds of Kuwaitis staged a sit-in outside parliament, chanting "No to normalisation” with Israel and voicing support for the Palestinians. 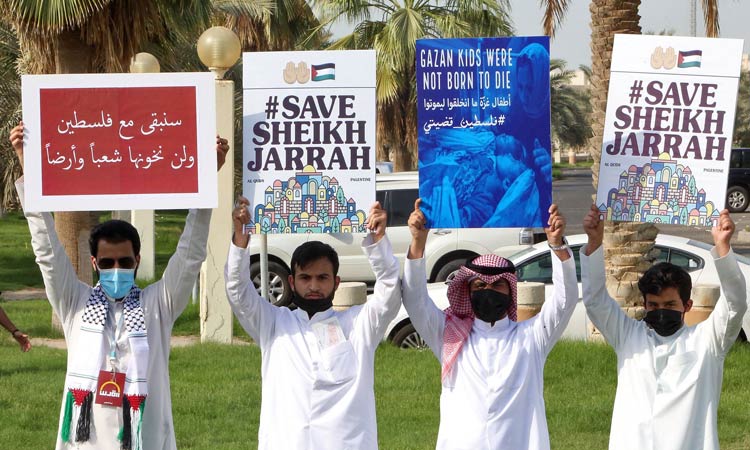 Kuwaitis hold up signs during a protest in solidarity with the Palestinian people in Kuwait City. AFP

UN Secretary General Antonio Guterres said on Tuesday that escalating violence between Israel and the Palestinians must stop immediately. "Israeli security forces must exercise maximum restraint and calibrate their use of force," Guterres said in a statement. "The United Nations is working with all relevant parties to de-escalate the situation urgently," Guterres said. US calls on Israel, Palestinians to end 'deeply lamentable' civilian deaths.

Egypt’s top diplomat says he has conveyed messages to Israel and other nations to help de-escalate the outbreak of violence in Jerusalem and the Palestinian territories.