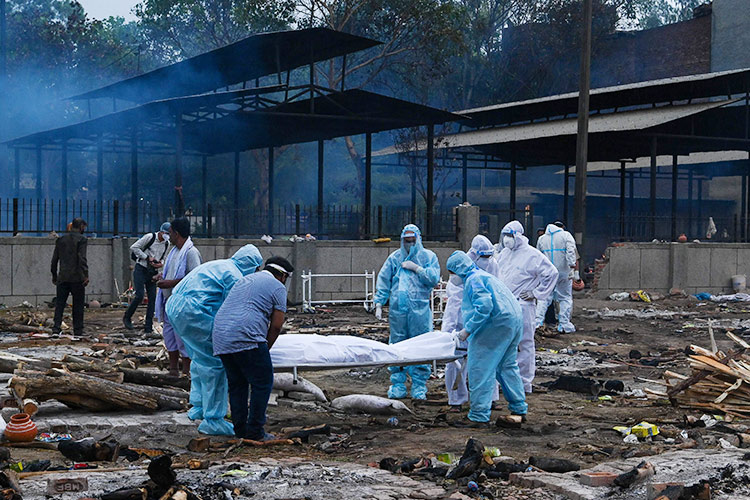 Relatives in PPE suits carry the body of a person at a cremation ground in New Delhi. AFP

India reported another record daily rise in coronavirus cases on Friday, bringing total new cases for the week to 1.57 million, as the country's vaccination rate falls dramatically due to a lack of supplies and transport problems.

Medical experts say the real extent of COVID-19 in India is five to 10 times the official tallies.

Prime Minister Narendra Modi has been widely criticised for not acting sooner to suppress the second wave, after religious festivals and political rallies drew tens of thousands of people in recent weeks and became "super spreader" events. 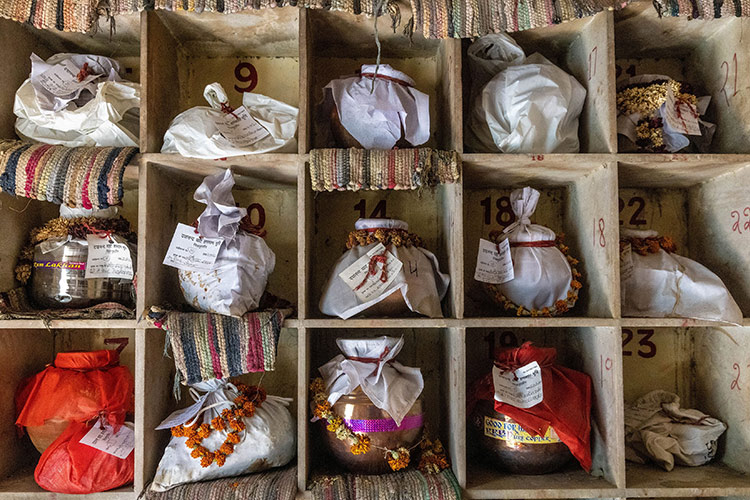 His government has also been criticised for delays in the country's vaccination programme, which medical experts say is India's only hope of controlling the second COVID-19 wave.

The Hindustan Times newspaper on Friday demanded: "Accelerate the vaccine drive, get the second wave of the pandemic under some control..."

While India is the world's biggest vaccine maker, it is struggling to produce enough doses to stem the wave of COVID-19.

Modi has stressed that Indian states must keep up vaccination rates. Although the country has administered at least 157 million vaccine doses, its rate of inoculation has fallen sharply in recent days.

"After having achieved a rate of around 4 million a day, we are now down to 2.5 million per day due to vaccine shortages," Amartya Lahiri, an economics professor at University of British Columbia was quoted as saying in the Mint newspaper.

"The 5 million a day target is the lower bound of what we have to aim for, since even at that rate, it will take a year for us to get everyone two doses. The situation unfortunately is very grim." 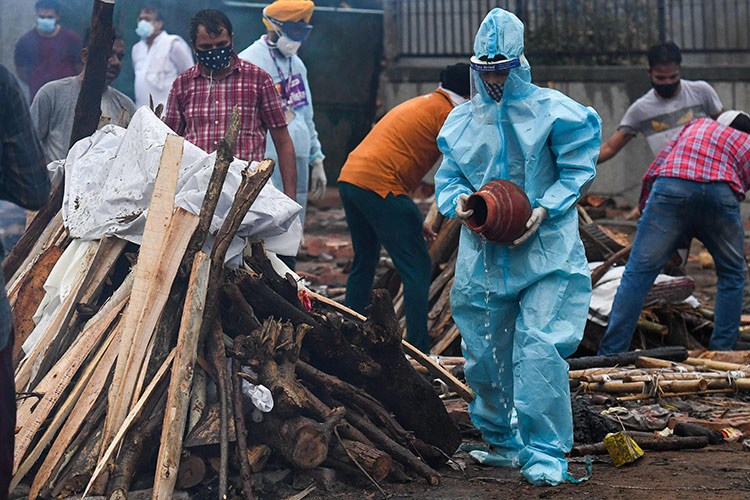 A man performs the last rites before the cremation in New Delhi. AFP

The European Union on Thursday backed a US proposal to discuss waiving patent protections for COVID-19 vaccines in an effort to increase the supply and access to vaccines, especially in vulnerable developing countries.

India's healthcare system is crumbling under the weight of COVID-19 patients, with hospitals running out of beds and medical oxygen. Morgues and crematoriums cannot handle the number of dead and makeshift funeral pyres burn in parks and carparks.

Although northern and western India bear the brunt of the disease, the share of the five southern states in the country's daily surge in infections rose from 28% to 33% in the first seven days of May, data shows.

In the southern city of Chennai, only one in a hundred oxygen supported beds and two in a hundred beds in intensive care units were vacant on Thursday, from a vacancy rate of over 20% each two weeks ago, government data showed.

In India's tech capital Bengaluru, only 23 of the 590 beds in intensive care units were vacant, and only 1 in 50 beds with a ventilator were vacant, a situation officials say points to an impending crisis.

"We must all help each other out at this time of need to get out of this situation," said autorickshaw driver Raj Kumar, who wears a protection suit. There is a plastic partition between him and the passengers at the back.

"If everyone stays home because they are scared, then who is going to help those in need?"

Several Indian states have imposed various levels of social restrictions to try to stem infections, but the federal government has resisted imposing a national lockdown.

"At times like this, people look for some sign that politicians are listening...what is happening today is a betrayal of hope and a slap in the face of the dream that was a modern progressive India," columnist Vir Sanghvi wrote in the Hindustan Times.

"We will beat COVID eventually. But by then thousands more will have lost their lives."

Despite a series of religious festivals the number of new infections per day in India dropped sharply in October and November.