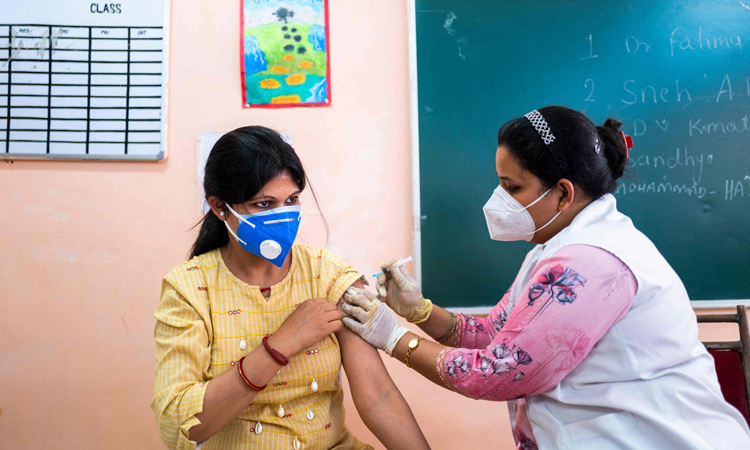 A health worker inoculates a woman with a dose of the Covishield vaccine in a school-turned-vaccination centre in New Delhi on Monday. AFP

India's coronavirus caseload topped 20 million on Tuesday as it struggled to contain a huge outbreak, in stark contrast to gradual reopenings in the United States and Europe.

Indian opposition leader Rahul Gandhi called for a nationwide lockdown as the country's tally of coronavirus infections, becoming the second nation after the United States to pass the grim milestone.

Rapid immunisation programmes in wealthier nations have helped suppress outbreaks, and the European Union was even looking at allowing vaccinated foreign tourists into the bloc as early as next month. 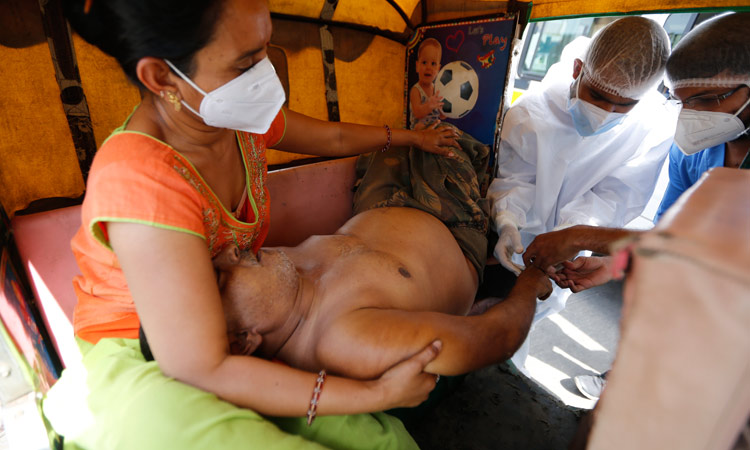 A health worker attends to a patient inside a vehicle at a dedicated COVID-19 government hospital in Ahmedabad. AP

Medical experts say actual numbers in India could be five to 10 times higher than those reported.

India's deadly second wave of infections, the world's biggest surge in coronavirus infections, has seen it take just over four months to add 10 million cases, versus more than 10 months for its first 10 million, according to Reuters.

With the government struggling, some young Indian volunteers have set up apps to crowdsource aid and are using social media to direct resources to people in need.

“Some of us do midnight to morning shifts, because the calls don't stop at 3am,” said Swadha Prasad, 17, who works long hours updating information, verifying the availability of supplies and fielding calls from frantic relatives seeking help.

“We work very hard but we can't save everyone,” said Prasad, her voice quavering as she recalled efforts to help an 80-year-old woman who died.

The number of new cases has declined in recent days, however, having peaked at 402,000 on Friday. 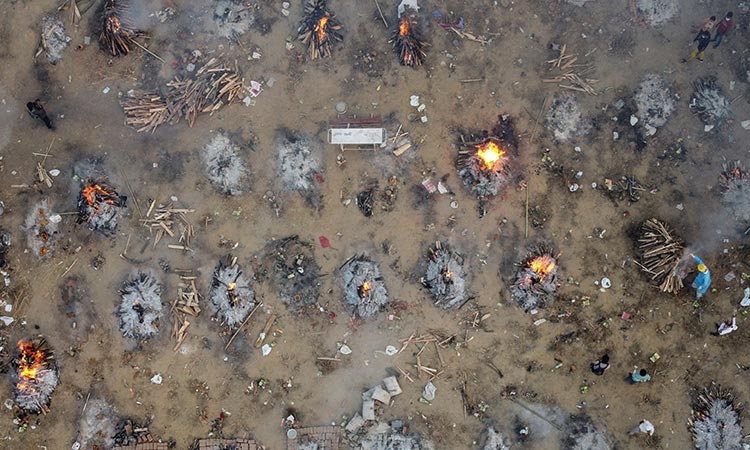 "The only way to stop the spread of Corona now is a full lockdown... GOI’s inaction is killing many innocent people," Congress party MP Gandhi said on Twitter, referring to the Government of India.

Prime Minister Narendra Modi's government is reluctant to impose a national lockdown due to the economic fall out, yet several states have imposed various social restrictions.

The surge in cases of the highly infectious Indian variant of COVID-19 has swamped the health system, drained supplies of medical oxygen vital for survival for those infected, and seen patients dying in ambulances and carparks outside hospitals. 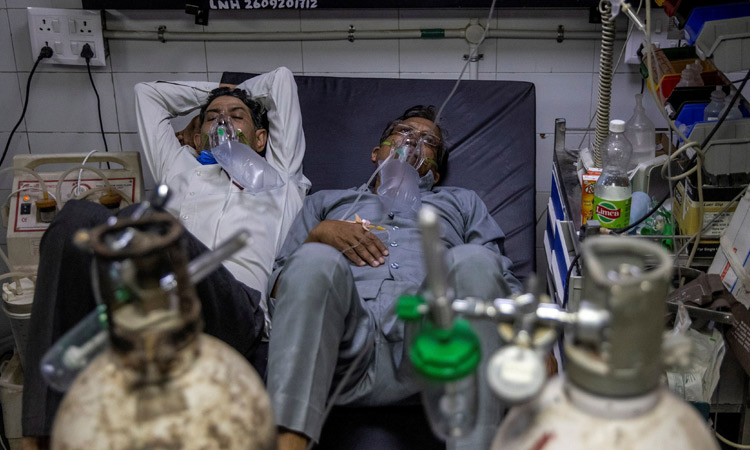 Rows of funeral pyres in parks and carparks cremate the overflow of corpses.

Modi has been criticized for not moving sooner to limit the latest wave of infections and for letting millions of largely unmasked people attend religious festivals and crowded political rallies during March and April.

"What the recent weeks reveal is that both Centre and states have been woefully unprepared for the second wave," an editorial in the Times of India said on Tuesday. 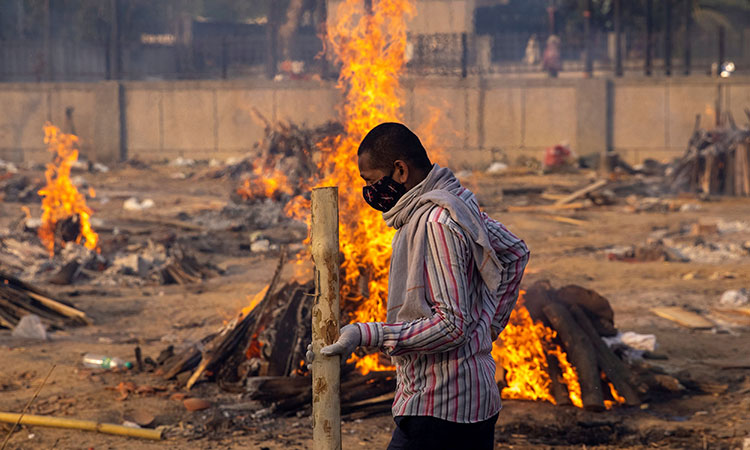 Offering a glimmer of hope, coronavirus cases in some regions were plateauing, a federal health ministry official said on Monday. Government modelling shows cases could peak by Wednesday this week, a few days earlier than a previous estimate, since the virus has spread faster than expected.

The surge in COVID-19 in India has coincided with a dramatic drop in vaccinations, due to problems with supplies and delivery.

At least three Indian states, including the richest state of Maharashtra which includes Mumbai, continued to report vaccine scarcity, shutting down some of its vaccination centres. 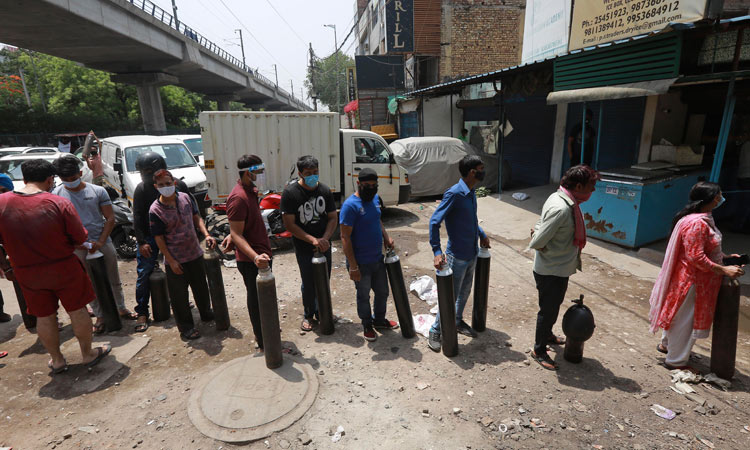 In Modi's home state of Gujarat, the three largest cities of Ahmedabad, Surat and Vadodara limited vaccines to the 18-44 age group, officials said.

The eastern state of Odisha also halted vaccination drives in 11 out of its 30 districts, local health officials told Reuters, citing paucity of resources.

"I am tired of standing in a queue. I will try one more time. If I don't get it then, I will give up,” said Anil Rajapure, a 49-year-old farmer in Maharashtra's Satara town, who has failed to get his first vaccine shot after three attempts due to either stocks running out or not arriving.

Public forecasts by India's two current vaccine producers show total monthly output of 70-80 million doses would increase only in two months or more, although the number of people eligible for vaccines has doubled to an estimated 800 million since May 1. Just 9.5% of the population of 1.35 billion has received at least a single dose. 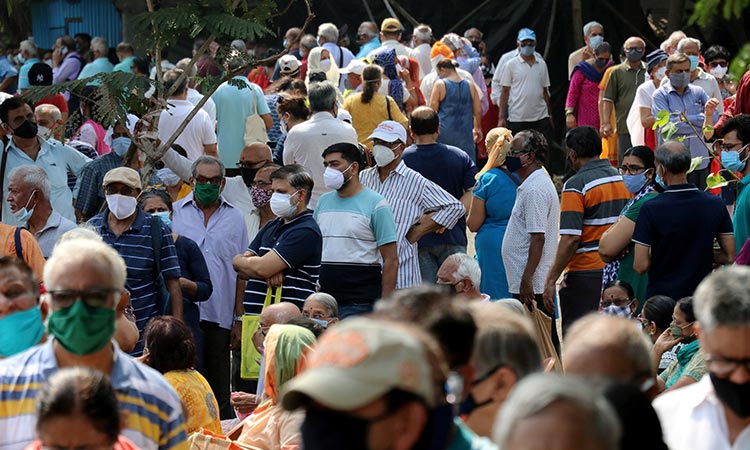