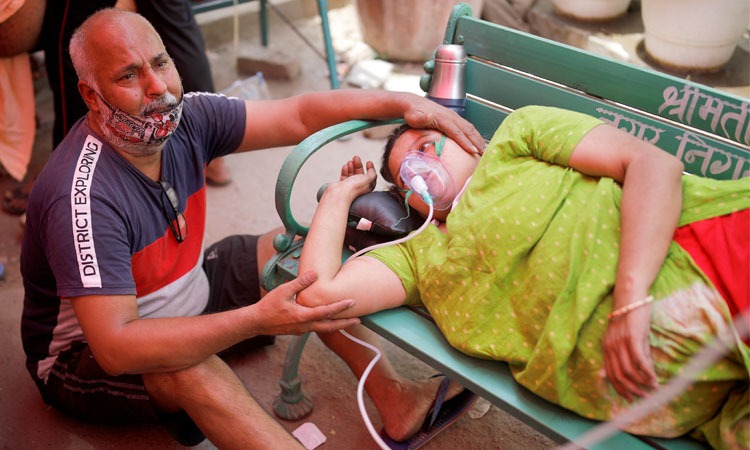 A man cries as he sits next to his wife, who receives oxygen support, outside a Gurudwara in Ghaziabad, India, on Monday. Reuters

India's total COVID-19 caseload neared 20 million on Monday, in stark contrast to gradual reopening in Europe and other wealthier parts of the world where rapid vaccination programmes have helped keep new cases down.

In India cases have soared by around eight million since the end of March, with Prime Minister Narendra Modi under growing pressure to take decisive action to reverse the surge.

Meanwhile Europe is looking at easing travel restrictions on foreign tourists as early as next month, if they are fully vaccinated or come from a country with COVID-19 under control. 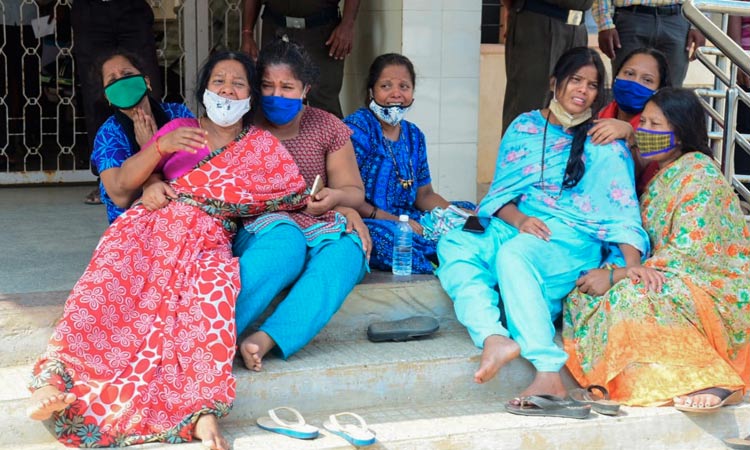 Relatives of COVID-19 patients who died cry at the government hospital in Karnataka state. AP

Doctors in the resort state of Goa on India's western coast told of how hospitals were overwhelmed by the spike in cases. "There are critical patients who have to be managed on trolleys and floors and kept on ventilators in critical Covid wards," the Goa Association of Resident Doctors said in a letter. Clinics in the capital New Delhi have also sent urgent appeals for help.

"Oxygen is a basic requirement of a hospital and a consistent supply has not been assured. We are constantly firefighting," the head of the Madhukar Rainbow Children's Hospital Dr Dinesh told the Indian Express daily.

The Indian leader thanked the bloc for "mobilising quick support for India's fight against the second wave" as international aid has also poured into the country.
Germany and France over the weekend sent medical equipment including oxygen-generating plants.

The contrasting situation in Europe was highlighted on Monday when the EU Commission proposed that travellers who are fully vaccinated with EU-approved jabs be able once again to enter the bloc, if they come from countries keeping Covid-19 at bay.

Among those preparing for a post-pandemic future is France, which on Monday relaxed controls on movement and allowed the partial return of students to classrooms as part of a four-stage process of opening up.

Greece reopened outdoor dining after six months of closures as it eyes the beginning of the tourism season. "Today I feel like I'm alive again, like I've been revived," joked Andreas Riminiotis, a retiree savouring the ambience at the Da Capo cafe in Athens the day after the country celebrated Orthodox Easter.

And in a jubilant call to action, Britain's Prince Harry joined pop royalty including Jennifer Lopez at a star-studded concert in Los Angeles Sunday to urge faster and more even global vaccinations.

"Vax Live: The Concert To Reunite The World" featured video messages from the pope and US President Joe Biden and in-person appearances from Hollywood stars such as Ben Affleck and Sean Penn.

In northern England, a crowd of 5,000 people danced without face coverings at a music festival in the nation's first post-lockdown gig.

However in a sign that the pandemic isn't over in Europe, Germany on Monday cancelled its iconic Oktoberfest beer festival for a second year running due to the pandemic.

The Covax global vaccine programme, which ensures access to jabs in poorer countries, struck a deal to buy 500 million doses of Moderna's Covid-19 jab, with the doses due to come on stream from October.

Also on the vaccine front, Denmark said Monday it would not include the Covid-19 vaccine from US drugmaker Johnson & Johnson in its national vaccination campaign, citing worries over serious side effects involving blood clots.

"The Danish Health Authority has concluded that the benefits of using the Covid-19 vaccine from Johnson & Johnson do not outweigh the risk of causing the possible adverse effect... in those who receive the vaccine," the authority said in a statement.