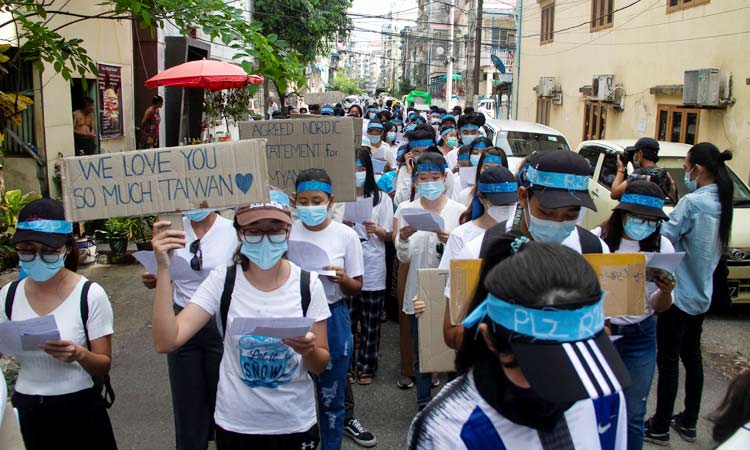 Demonstrators march during a protest against military coup in Yangon, Myanmar. Reuters

Myanmar pro-democracy activists pledged on Tuesday to hold a series of protests this week to maintain pressure on military rulers during the country's most important holiday of the year.

The five-day New Year holidays, known as Thingyan, are usually celebrated with prayers, ritual cleaning of Buddha images in temples, and high-spirited water-throwing on the streets. 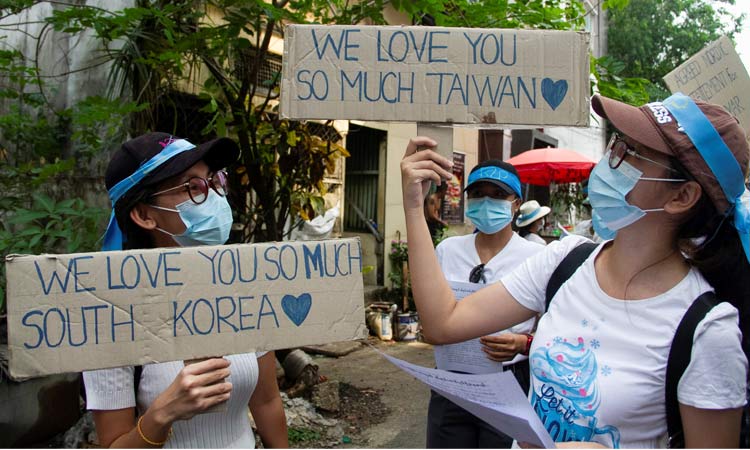 Demonstrators carry placards as they march during a protest against military coup, in Yangon, Myanmar. Reuters

“The military council doesn't own Thingyan. The power of people is in the hands of people,” Ei Thinzar Maung, a leader of the General Strike Collaboration Committee protest group, wrote on Facebook.

Ei Thinzar Maung said other planned holiday protests against the junta included the splattering of red paint on sidewalks and the blasting of car horns.

Activists also called for a day of silence to commemorate the victims of the violence and for a day of religious observance on Saturday, with Buddhists urged to wear religious attire and recite prayers together and Christian communities to wear white and read psalms. Followers of other religions in the predominantly Buddhist country were urged to follow the call of their leaders.

It will be the second consecutive disrupted new year holiday after the coronavirus pandemic all but cancelled last year's celebrations.

The Feb.1 coup has plunged Myanmar into crisis after 10 years of tentative steps towards democracy as the military stepped back from politics and allowed Aung San Suu Kyi to form a government after her party swept a 2015 election.

The military says it had to overthrow her government because a November election again won by her National League for Democracy was rigged. The election commission dismissed the accusation.

The coup has triggered daily protests by those opposed to military rule, but at a heavy price, with security forces killing 710 protesters, according to a tally by the Assistance Association for Political Prisoners (AAPP) activist group.

That included 82 people killed in the town of Bago, about 70 km (45 miles) northeast of Yangon, on Friday.

Details of the violence were difficult to verify because of the junta's curbs on broadband internet and mobile data services.

A spokesman for the junta could not be reached for comment.

Suu Kyi, 75, who has led Myanmar's struggle against military rule for decades and who won the Nobel Peace Prize in 1991, has been detained since the coup and charged with various offences. These include violating a colonial-era official secrets act that could see her jailed for 14 years.

“We do not celebrate Myanmar Thingyan this year since over 700 of our innocent brave souls are killed by inhumane junta forces unlawfully. We believe we will win this revolution,” said one Twitter user identified as Shwe Ei.