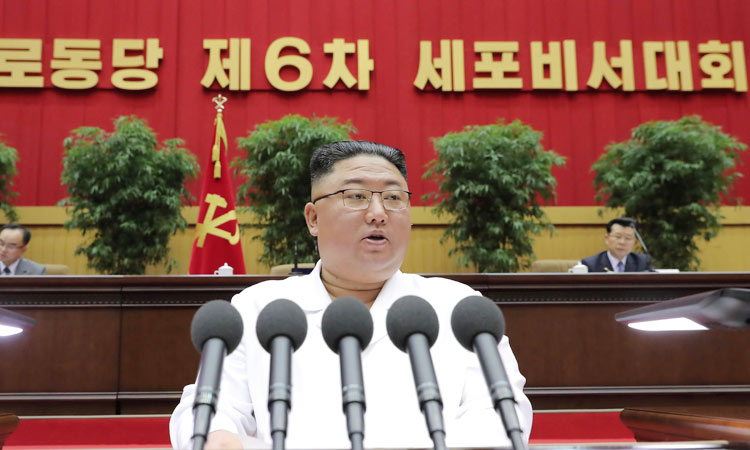 North Korean leader Kim Jong Un urged ruling party officials to wage another “Arduous March” of work and sacrifice, state media reported on Friday, linking the current economic crises to a period in the 1990s of famine and disaster.

“Arduous March” was a term adopted by officials to rally citizens during a famine that killed as many as 3 million North Koreans after the fall of the Soviet Union, which had been a major backer of Pyongyang’s communist founders.

The period is often talked about as a historic event, but Kim’s apparent comparison to current problems comes after he earlier in the week said the country faces the “worst-ever situation.”

His comments were made in a speech on Thursday at the closing of a conference for low-level Workers’ Party of Korea (WPK) officials, where he had urged them to be more proactive and responsible in carrying out the country’s new five-year economic plan, adopted at a party congress in January.

“I made up my mind to ask the WPK organizations at all levels ... to wage another more difficult ‘Arduous March’ in order to relieve our people of the difficulty, even a little,” Kim said, according to a report by state news agency KCNA.

The party must reward the people’s loyalty and become a genuine “servant” to them, he was cited as saying.

North Korea has not reported a single confirmed case of the novel coronavirus, but American and South Korean officials have cast doubt on the notion that it has escaped COVID-19.

The country ended almost all cross-border travel, restricted trade to a trickle, and imposed other restrictions to prevent an outbreak.

Those measures, combined with ongoing international sanctions imposed over North Korea’s nuclear weapons and ballistic missile programmes, have taken a toll on the country’s economy and raised concerns of humanitarian crisis.

An independent panel of experts monitoring UN sanctions recently reported that international aid groups were struggling to reach vulnerable women and children inside North Korea because of the pandemic lockdowns, leaving potentially hundreds of thousands without access to needed nutrients.

An official at North Korea’s Ministry of Public Health released a statement on Tuesday denying that any children face malnutrition, and that such reports aim to tarnish the country’s image.