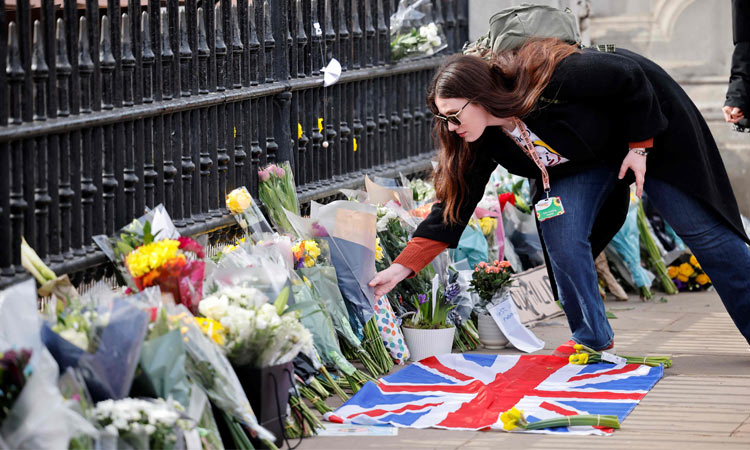 A woman adds a bunch of flowers to a line of floral tributes against the railings at the front of Buckingham Palace on Friday. AFP

Individuals and groups of people, some of them families with young children, gathered to see the formal announcement pinned to the palace gates. 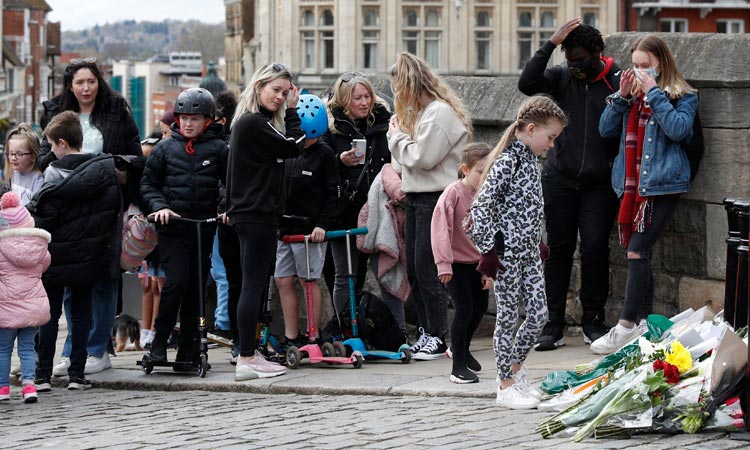 Flowers are left at the entrance to Windsor castle following the announcement of the death of Prince Philip.AFP

As news spread, the mood was sombre, with only the sound of muted conversation, and the hum of passing traffic breaking the silence. Some members of the public looked visibly moved.

"He was a figure of history," Sarah Allison, 31, who travelled to the palace with her four-year-old daughter, said. 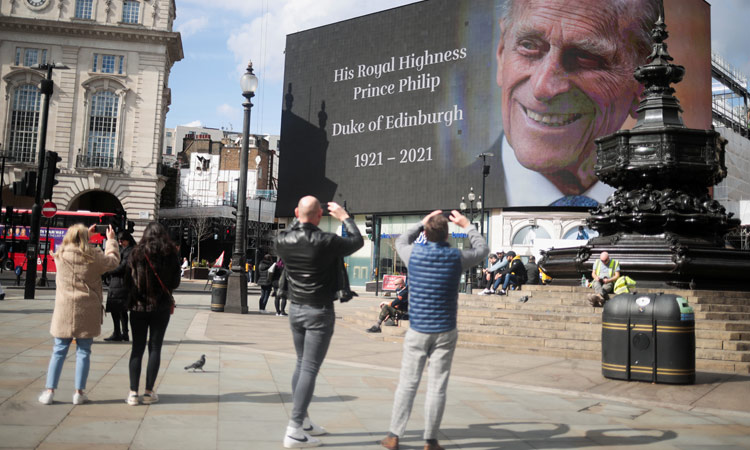 People take pictures of a screen with a picture and a message about Prince Philip. Reuters

"It's really a sad day. He lived an amazing and varied life, and it's such a loss to his family and his wife, because they were inseparable."

Buckingham Palace — a central London landmark — became one of the focal points for public mourning after the death of Diana, princess of Wales, in 1997.

Nearby Clarence House, just a short distance up The Mall, was also thronged with well-wishers when the queen's mother, also called Queen Elizabeth, died aged 101 in 2002. 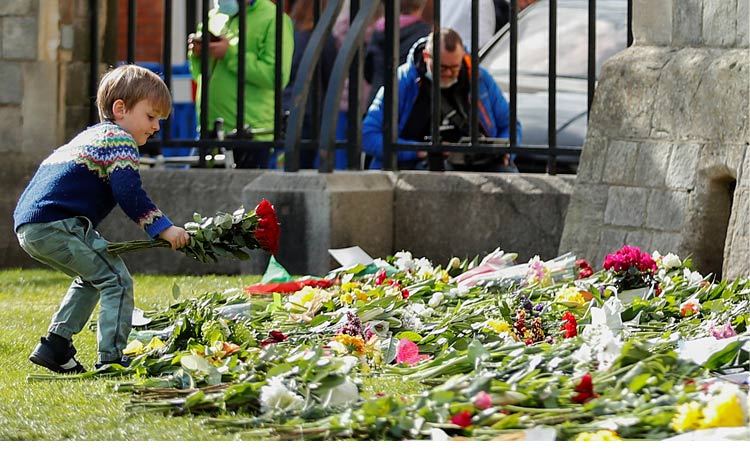 Chris Green, a local government officer, came straight down when he heard the news.

"I was local and I came here when the Queen Mother and Diana died so I came here for a quiet thought and to pay my respects," the 57-year-old said.
"It was very much his support for the Queen that was the important thing.

"With his age and his recent health problems it hasn't come as a massive shock but it is one of those moments we will look back on and say it was a significant event." 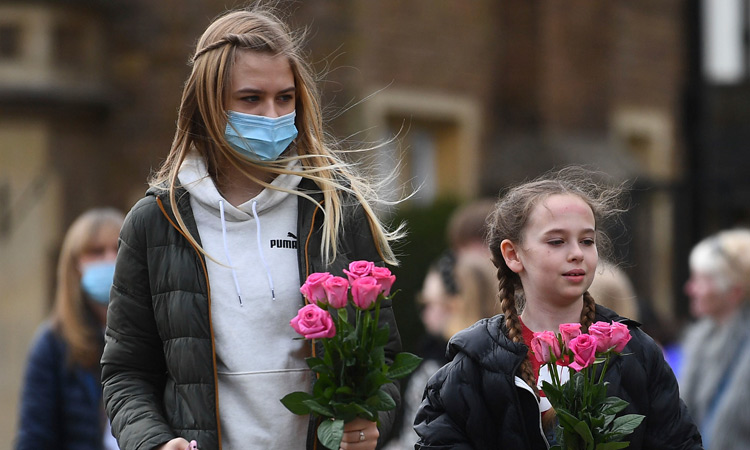 Children arrive to leave flowers at Cambridge Gate following the announcement of the death of Prince Philip. AP

Uniformed police walked through the groups of people, quietly reminding people about social distancing rules to stop the close-contact spread of the coronavirus.
Covid restrictions, which are gradually being lifted across the country, meant crowds were thinner than would normally be expected for such a major royal event.

But some people still felt duty bound to pay their formal respects. "It's an honour to be here for Prince Philip," said one woman, who gave her name only as Sandra.

"He is the epitome of service and commitment to his country. He was an important world figure and it's nice to see so many people have come out. 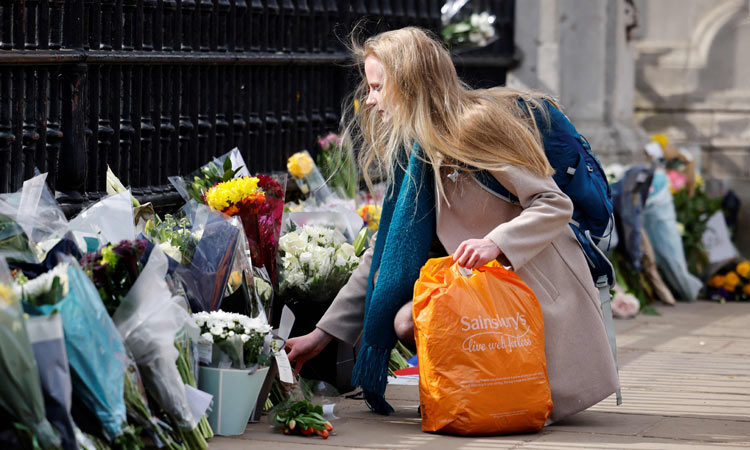 A woman adds a bunch of flowers to a line of floral tributes against the railings at the front of Buckingham Palace. AFP

"He was the patriarch of one of the strongest families in the world. I think this is a pivotal moment for the royal family the Queen has relied on him and I don't think they will have realised the size of this loss." 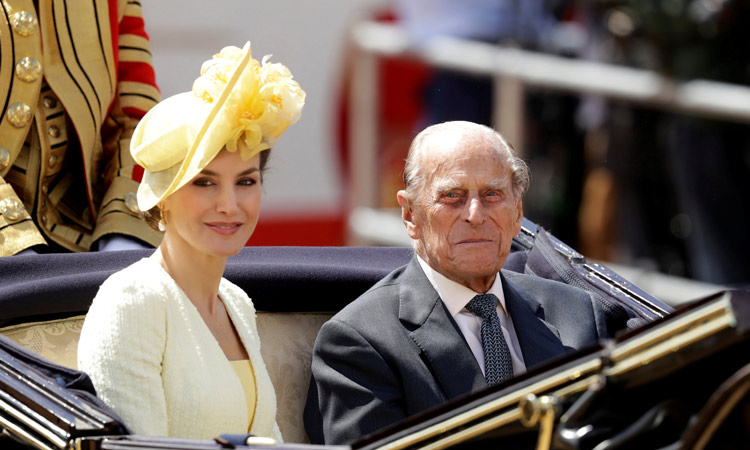