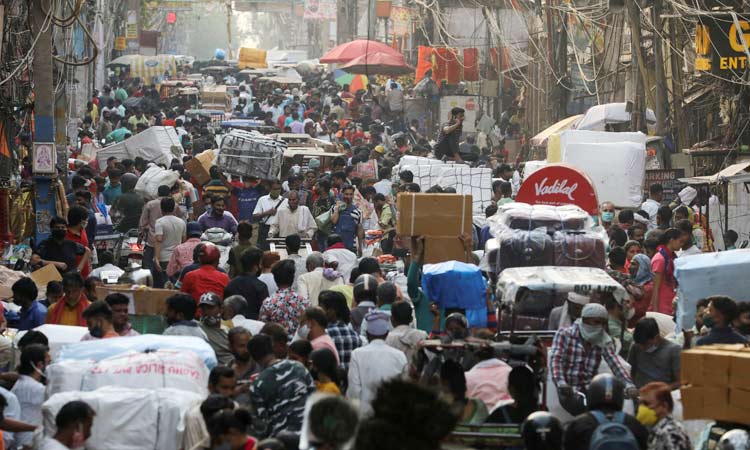 People walk at a crowded market amidst the spread of the coronavirus disease in the old quarters of Delhi, India. Reuters

India has hit another new peak with 115,736 coronavirus cases reported in the past 24 hours on Wednesday, a 13-fold increase in just over two months and raising pressure on the government to expand its vaccination campaign.

New Delhi, Mumbai and dozens of other cities are imposing curfews to try to slow the soaring infections.

Over 62% of the UAE population vaccinated against COVID-19

The federal government has asked states to decide on local curbs to control the spread of the virus, but has so far refused to impose any national lockdown after the last one in 2020 devastated its economy and left millions of people penniless.

The latest rise reported Wednesday overtook Sunday’s record of 103,844 infections. Fatalities rose by 630 in the past 24 hours, the highest since November, raising the total death toll in the country to 166,177 since the pandemic began.

India has reported 12.8 million virus cases since the pandemic began.

Experts say the surge is blamed in part on growing disregard for social distancing and mask-wearing in public spaces. The latest surge in infections is worse than last year’s peak of more than 97,000 a day in mid-September.

The total number of cases since the first recorded infection in India just over a year ago now stands at 12.8 million, making it the third worst hit country after the United States and Brazil.

Ominously, the daily increase has topped 100,000 twice this week. The only other country to post such numbers has been the United States.

India now has a seven-day rolling average of more than 78,000 cases per day and has reported 12.8 million virus cases since the pandemic began, the highest after the United States and Brazil.

India's coronavirus case load topped 7 million on Sunday and the country has added a million cases in just 13 days. It has the second-highest number of infections, behind the United States which is approaching the 8 million mark.

Russian authorities have so far shunned imposing a second lockdown or shutting down businesses nationwide, insisting that the health care system is able to cope with the surge.

Despite a series of religious festivals the number of new infections per day in India dropped sharply in October and November.