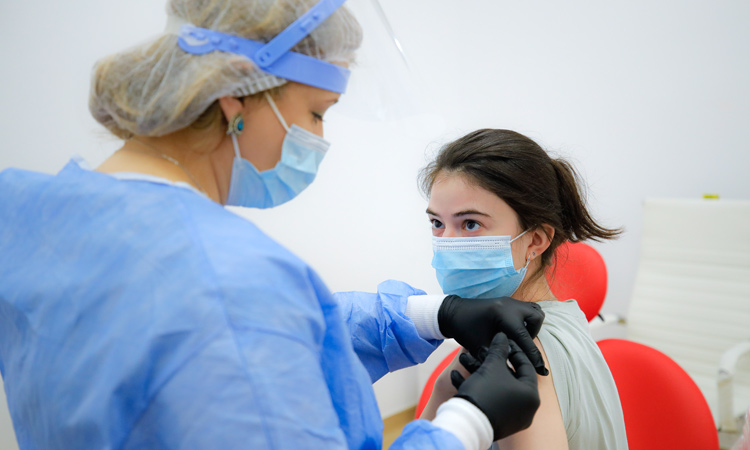 A woman gets an AstraZeneca vaccine in Bucharest, Romania, on Wednesday. AP

The EU's medicines regulator said on Wednesday that blood clots should be listed as a rare side effect of the AstraZeneca jab but the benefits continue to outweigh risks, as several countries battle fresh virus surges amid vaccine shortfalls.

A number of nations have suspended the use of AstraZeneca's vaccine for younger populations after it was earlier banned outright in several places over blood clot scares.

The United Kingdom on Wednesday said that people under the age of 30 should choose alternatives to the vaccine, after reporting 19 deaths from clots among people who received the shot.

The back-and-forth over the vaccine comes as countries from Germany to Ukraine and India face new waves of infections and deaths from the virus that has now killed more than 2.8 million people globally.

Governments are scrambling to secure much-needed vaccine doses, with Australia the latest nation to complain of shortages that it blamed on EU export controls.

The European Medicines Agency (EMA) said that blood clots should be listed as a "very rare" side effect, encouraging countries to continue its use.

The announcement came after the EMA examined 86 blood clotting cases, 18 of which were fatal, out of around 25 million people in Europe who received the AstraZeneca vaccine. Most of the cases were in women aged under 60.

But EMA chief Emer Cooke said no particular risk factor had been identified and the clots may be linked to an immune response to the vaccine.

"Specific risk factors such as age, gender or medical history have not been able to be confirmed, as the rare events are seen in all ages," she told a news conference.

"The benefits of the AstraZeneca vaccine in preventing Covid-19 overall outweigh the risk of side effects," she added.
"It is saving lives."

'Plausible but not confirmed'

The World Health Organisation's vaccine experts on Wednesday echoed EMA's findings, saying a causal relationship between the vaccine and blood clots was "plausible but is not confirmed."

Canada, France, Germany and the Netherlands are among several countries that are not recommending the shot for younger people.

Britain urged people under 30 to use other vaccines besides AstraZeneca, after reporting 79 blood clots and 19 deaths among 20 million doses given. It did not say how many people had been given the AstraZeneca vaccine.

AstraZeneca's vaccine has been administered in at least 111 countries, more than any of its rivals, according to AFP data. It is being used in wealthier countries and poor nations, largely as part of the Covax scheme to ensure equitable access to vaccines.