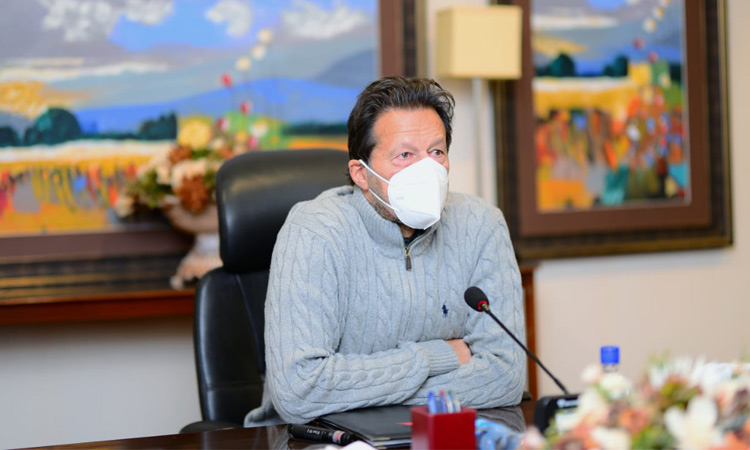 Pakistan Prime Minister Imran Khan said on Sunday that a small minority of corrupt elements has united to escape the course of the law and is working against his government from day one.

"The government can't fight mafias alone. We can't eliminate corruption without the support of the judiciary," he said while responding to questions in a live telephonic session with callers.

"People like us for striving to bring such elements under the law. We need to change the collective mindset to end corruption once and for all."

In response to a caller who complained about inflation, Imran said prices of vegetables and other food items were on the rise as the farmers who supplied them wanted their products to be sold at high prices in the market. "The middlemen are making a lot of money from this.”

The prime minister said his government was working towards an ingenious solution through which they are aiming to connect the primary producers of these items to the final consumers.

He said the masses will see the positive effects of the rupee strengthening against the US dollar, adding that the local currency's performance had already led to a decline in prices of diesel.

Imran rejected advice from his aides and ministers, who suggested he answer questions from people in a recorded telecast. Instead, he insisted on answering the questions during a live transmission.

Before answering the calls, he urged people to "help yourselves and help the nation" by observing coronavirus standard operating procedures (SoPS). "I will advise everyone to wear this mask.”

Imran said it was the government's responsibility to protect people during the infection. He cautioned people to wear masks in closed rooms where there was no ventilation and in buses and other means of transport.

He said Pakistan was importing gas from other countries at exorbitant rates while the resources it was tapping in its own country, were on the decline.
Imran said countries progress due to higher education among the masses. "We also have to think about what sort of high education we have to impart," he said.

"Buildings do not bring about quality education; it also depends on what type of degrees they are handing out to students.”

The premier said the government is bringing about "huge changes" in the HEC, adding that the previous chairman of the education committee was not selected by the incumbent government.

Imran ruled out a complete lockdown due to the spread of coronavirus, but assured certain restrictions. Observing that the people were "roaming around without fear," he feared that doing so would pressurise the hospitals.

He said rise in the price of sugar was owing to the corrupt practices of the sugar mafia. Responding to a caller regarding the increase in incidents of child sexual abuse, he said, "It is the direct result of the increase in immodesty in any country. Obscenity always has its impact on a society. Islam sets the rules for modesty for a reason.”

The prime minister urged filmmakers to pay attention towards the issue and develop some content to counter the threat. To another question, the premier said the land mafia is the biggest scourge for this country. Such mafia colludes with the government to fulfill its designs, he said. "We managed to get the land worth Rs450 billion freed from such elements."

He made it clear that he would not take any step to normalise relations with India unless it retreats from depriving occupied Kashmir from its autonomous status. "Have faith in me, I will never take any measure that will undermine Kashmir.”

Imran said he would take measures to ensure that essential commodities are within the reach of the masses during the Holy Month of Ramadan.