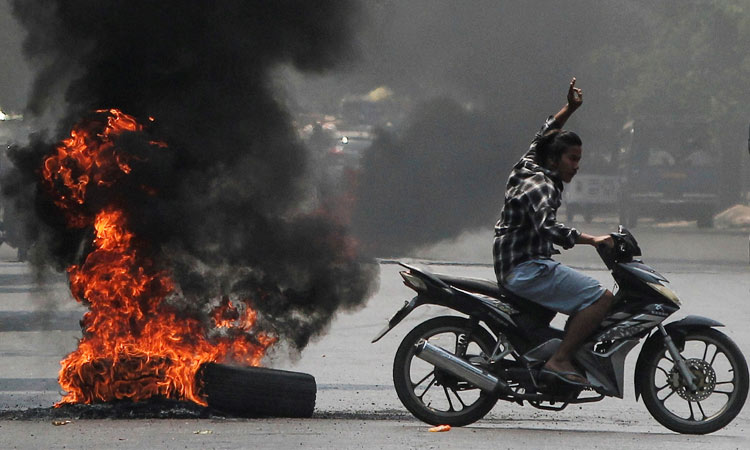 A man flashes the three-finger salute as he passes burning tires during a protest against the military coup, in Mandalay, Myanmar. Reuters

Myanmar activists held candle-lit protests overnight and scrambled to find workarounds for a new internet shutdown on Friday, as opponents to the military’s bloody crackdown on dissent vowed no letup in efforts to unseat the ruling generals.

The military did not announce or explain its order to telecom firms to cut wireless broadband, which adds to a ban on mobile data through which a nationwide movement has mobilised on social media and spread images of the junta’s lethal suppression of mostly youth-led protests. 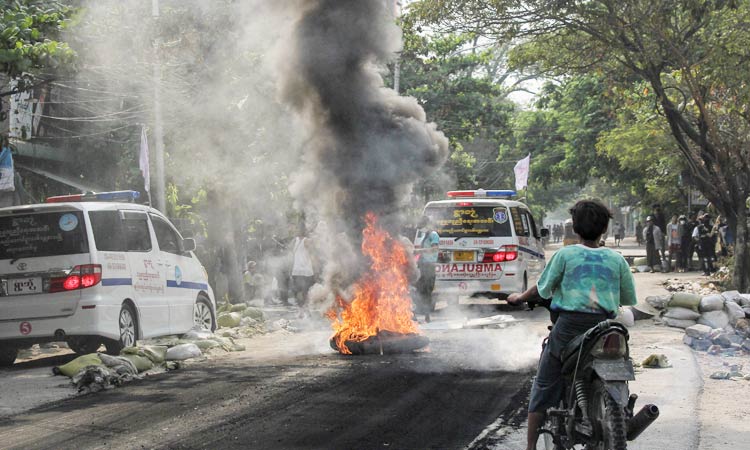 A fire burns on the street during a protest against the military coup, in Mandalay, Myanmar. Reuters

Late on Thursday, protesters spread a call for a “flower strike” at bus stops where demonstrators killed by security forces had departed on their last journeys.

“We will leave flowers at bus stops tomorrow ... That’s what I want to tell you guys before the internet is down,” Khin Sadar, a protest leader, posted on Facebook.

“In the following days, there were street protests. Do as many guerrilla strikes as you can. Please join.” 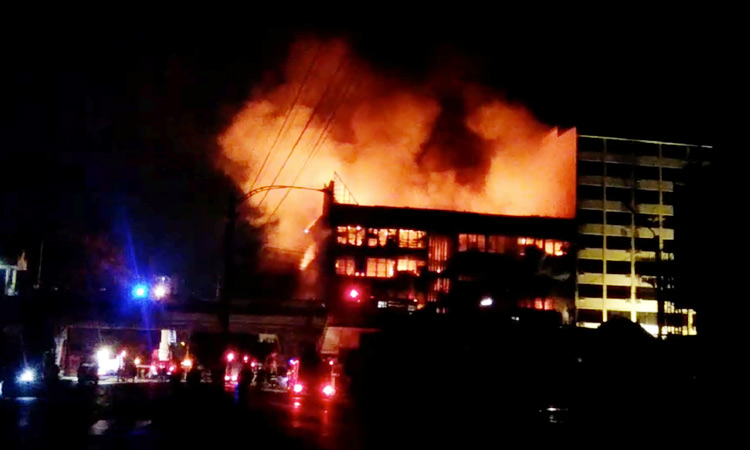 Ruby Mart is engulfed in flames, in Yangon, Myanmar. Reuters

“Let’s listen to the radio again. Let’s make phone calls to each other too.”

The former British colony has been in chaos for two months following the military’s overthrow of Aung San Suu Kyi’s elected administration, which has sparked anger across towns and cities and reignited hostilities between the armed forces and ethnic minority insurgents in several different regions.

New charges of violating the official secrets act were filed against the Nobel laureate, her chief lawyer said on Thursday, the most serious so far, on top of two comparatively minor offences. Breaches of the colonial-era law are punishable by 14 years in prison.

The charges were filed against three of Suu Kyi’s deposed cabinet ministers and her Australian economic adviser Sean Turnell, who are among hundreds detained in the military’s sweeping crackdown on opponents since it took power, alleging fraud in an election swept by Suu Kyi’s party.

Lawyer Min Min Soe said Suu Kyi looked in good health during a video hearing on Thursday, but was unable to tell whether the ousted leader, the figurehead of Myanmar’s decades-long fight for democracy, was aware of the situation in her country.

WE WILL NOT SURRENDER

Protesters were in the streets in several urban centres day and night on Thursday, where some burned copies of the military-drafted 2008 constitution. Media reported two people were killed, including an 18-year-old man, as police opened fire to quell gatherings.

Khit Thit Media reported shots were fired at a protest during the night, where 400 troops were present. The report could not immediately be verified.

Some 543 people have been killed in the uprising, according to the Association for Political Prisoners (AAPP) advocacy group, which is tracking casualties and detentions. The military has repeatedly said those killed had instigated violence.

A video shared widely on social media late on Thursday showed an unconscious man being kicked and beaten by a group of seven helmeted, uniformed men with rifles, who dragged him face down along a road before carrying him away.

Another image shared widely showed an overhead view of hundreds of candles arranged on a road in the darkness, forming the words “we will never surrender.”

Britain on Thursday sanctioned one of the military’s biggest conglomerates, following a similar move by several Western countries. Britain’s Next became the latest high-street brand to suspend orders from Myanmar’s factories.

“The Myanmar military has sunk to a new low with the wanton killing of innocent people, including children,” British Foreign Secretary Dominic Raab said. The UK move was welcomed by his U.S. counterpart Antony Blinken.

Myanmar’s Asian neighbours, which it relies on for trade, have not imposed any embargoes, but some have moved beyond measured language after the military killed 141 people as it marked Armed Forces Day on Saturday.

Neighbour Thailand on Thursday said it was “gravely troubled.” Stronger positions on Myanmar have been taken by the Philippines, Malaysia, Indonesia and Singapore, the top diplomats of which are meeting separately this week with Chinese State Councillor Wang Yi in Beijing.

In a transcript of an interview made available late on Thursday, Singapore Foreign Minister Vivian Balakrishnan expressed dismay at the bloodshed.

“We are alarmed and appalled at the escalating violence,” he said, adding China’s Wang Yi also hoped for an end to violence and for dialogue. 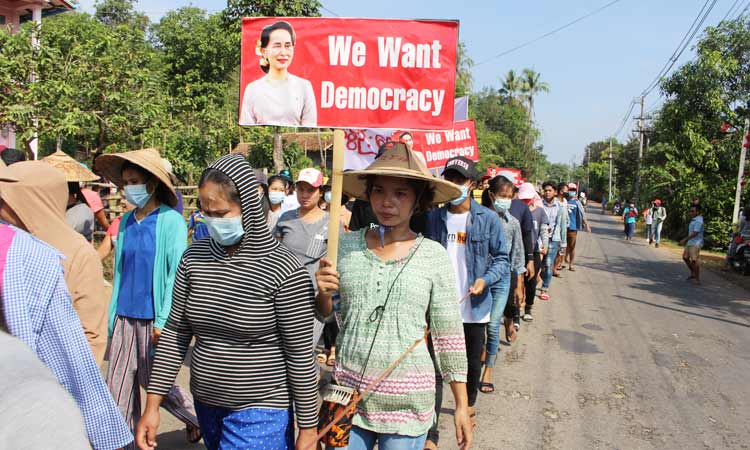 The campaign against the ousting of the elected government of Aung San Suu Kyi has included street marches, a civil disobedience campaign of strikes and quirky acts of rebellion organised on social media, which the junta has sought to control by shutting down wireless broadband and mobile data services.