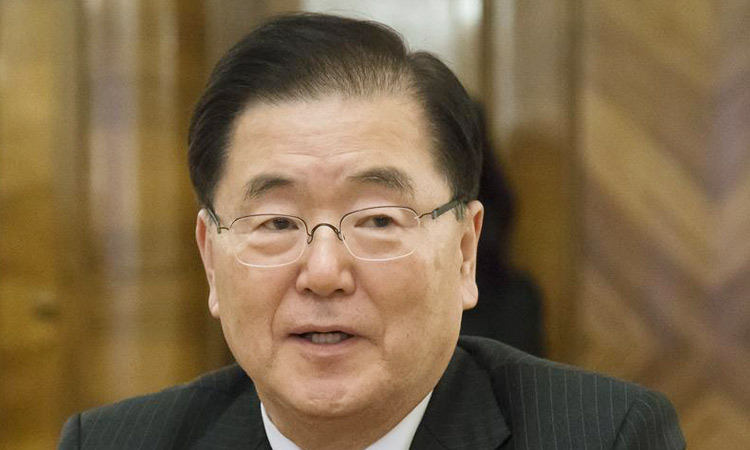 A South Korean foreign minister will visit China this week for the first time in three years, looking for ways to improve ties even as tensions are running high between Beijing and the United States, the South’s most important ally.

Chung Eui-yong will go to China on Friday, and on Saturday will meet with the Chinese government’s top diplomat, State Councillor Wang Yi, South Korea’s foreign ministry said in a statement.

“This meeting of the diplomatic ministers of Korea and China will serve as an opportunity to explore ways to develop bilateral relations between Korea and China and to exchange in-depth opinions on the Korean Peninsula, regional and international issues,” the statement said.

Chinese foreign ministry spokeswoman Hua Chunying told a briefing in Beijing said relations with South Korea were “enjoying sound development” and the coming year will be one of cultural exchanges ahead of 2022, which will mark the 30th anniversary of the two countries’ ties.

“China is ready to work with the Republic of Korea to implement the important consensus reached by the two heads of state, deepen communication and practical cooperation so as to move forward the strategic cooperative partnership,” she said.

South Korea has been seeking to mend ties with China after a row broke out in 2016 over a US anti-missile system placed in South Korea resulted in a sharp slump in its tourism, cosmetics and entertainment industries, which had prospered thanks to Chinese demand. China is South Korea’s biggest trading partner.

Relations have improved since then, and political leaders from both countries have visited, including most recently, a visit to South Korea by Yi in November. The last time a South Korean foreign minister visited China was in 2017.

Neither side elaborated on the agenda, but one diplomatic source said that Chung would like to persuade Beijing to ease an informal boycott of Korean entertainment in place since the missile dispute.

A main priority is an easing of restrictions on Korean movies and TV dramas, which are currently facing difficulty being screened in cinemas or broadcast online, the source said.

A South Korean foreign ministry official said that Seoul is seeking to ensure that through the “ambitious” plans for exchanges the private sector can continue economic cooperation.

The official said Seoul was encouraged, for example, by China’s recent decision to approve licenses for some South Korean video game makers.

Besides economic issues, South Korea sees China as instrumental in reviving stalled denuclearisation talks between the United States and North Korea, a longtime ally of Beijing.

The new US administration of President Joe Biden, however, has gotten off to a confrontational start with China, while South Korea has to balance its interests.

“Our basic stance is clear and not at all ambiguous: Based on the solid South Korea-US alliance, the government’s firm position is to harmoniously improve South Korea-China relations,” Chung told a briefing on Wednesday.