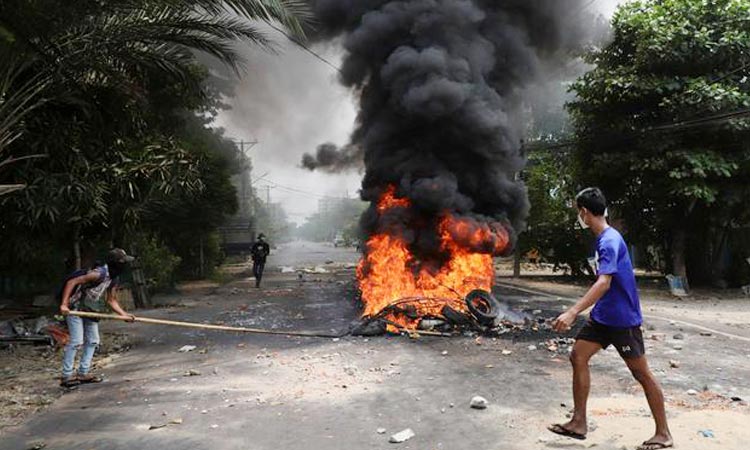 An anti-coup protester walks past burning tires after activists launched a garbage strike against the military rule in Yangon, Myanmar. Reuters

Myanmar activists held candle-lit vigils overnight after scores of deaths in recent days from a military crackdown on anti-coup protesters and clashes in ethnic border areas, as the United States ordered non-essential embassy staff to leave.

At least 521 civilians have been killed in two months of protests against the Feb.1 coup, 141 of them on Saturday, the bloodiest day of the unrest, according to the Assistance Association for Political Prisoners (AAPP).

The advocacy group said a further eight people died on Tuesday, when thousands came out to march in several towns, according to media and photos on social media. 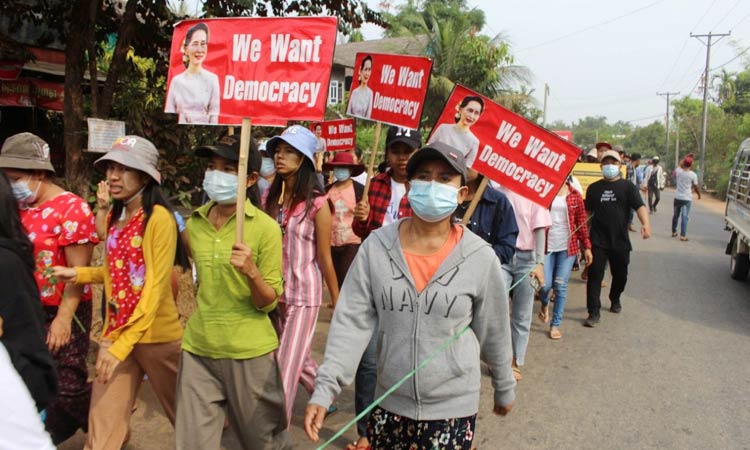 There were also new candle-lit protests overnight in towns across Myanmar in defiance of a curfew and at least one dawn march on Wednesday by demonstrators, media reports said.

Myanmar has been in turmoil since the army ousted an elected government led by Nobel laureate Aung San Suu Kyi, detaining her and reimposing military rule after a decade of tentative steps towards democracy.

Fighting has also flared between the army and insurgents in frontier regions, and refugees are spilling over borders. 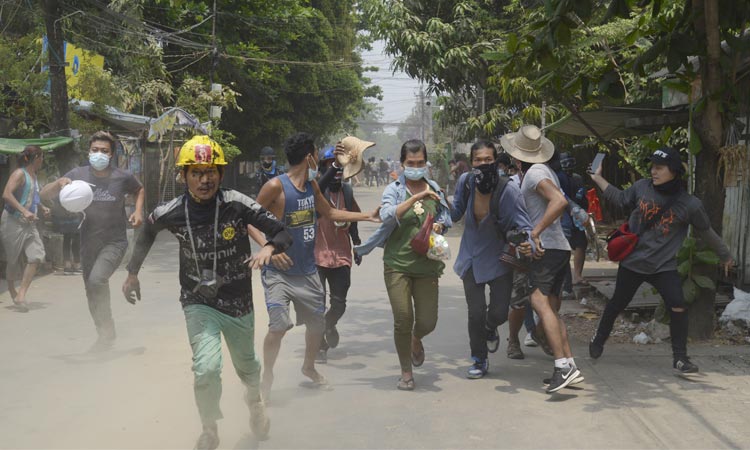 Anti-coup protesters run to avoid the military during a demonstration in Yangon, Myanmar. AP

The Karen National Union rebel group, which operates along the eastern border with Thailand, said on Tuesday it was bracing for a major government offensive.

The group urged the international community, neighbouring Thailand in particular, to help Karen people fleeing the “onslaught” and called for countries to cut ties with the junta to stop the violence against civilians.

Meanwhile, the Kachin Independence Army (KIA), a rebel group in the north, attacked a police station in Kachin state at 3am on Wednesday, the Kachin News Group said.

A march by civilian protesters also took place at dawn on Wednesday in Moegaung in Kachin, the news service reported.

Police and a spokesman for the Myanmar junta did not answer calls seeking comment.

The United States on Tuesday ordered the departure of non-emergency US government employees and their family members from Myanmar due to concerns over civil unrest.

Opponents of the coup have called for a united front with insurgent groups.

Rebels have battled the government for decades for greater autonomy in remote border regions. The military has justified its long grip on power by saying it is the only institution capable of ensuring national unity.

Thailand denied accusations from activists that refugees were being forced to return but a Thai official on the border said the army was sending most people back because it was deemed safe on the Myanmar side.

A spokesman for the UN refugee agency said it was concerned about reports people were being sent back and it was seeking information from Thailand.

A border state in India withdrew an order to refuse refugees food and shelter after the measure drew fierce public criticism.

The military seized power saying that November elections won by Suu Kyi's party were fraudulent, an assertion dismissed by the election commission.

A civil disobedience campaign of strikes has paralysed parts of the economy and protesters stepped it up by asking residents on Tuesday to leave rubbish at city intersections.

Western countries have condemned the coup and the violence and called for Suu Kyi's release, and some have imposed limited sanctions.

In Washington, US Secretary of State Antony Blinken said some foreign countries and companies with significant investments in enterprises that support Myanmar's military should reconsider those stakes.

He said the recent violence was “reprehensible” and followed a pattern of “increasingly disturbing and even horrifying violence” against demonstrators opposing military rule.

Indonesia has led efforts by members of the 10-country Association of Southeast Asian Nations (ASEAN), of which Myanmar is a member, to encourage a negotiated solution, despite an old agreement not to comment on each other's problems. 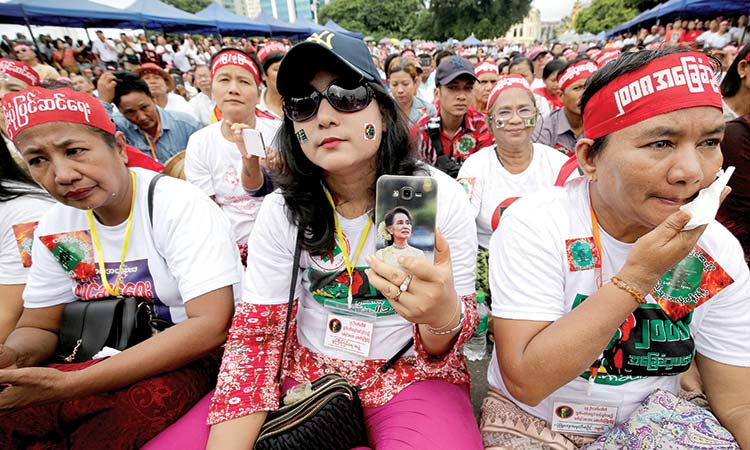