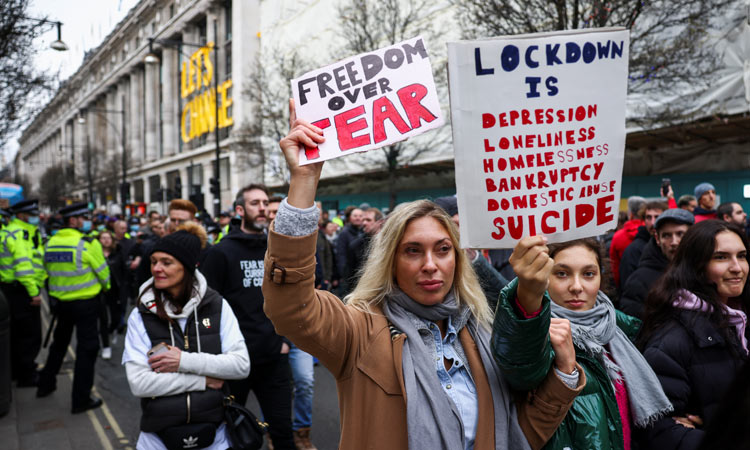 People hold banners during a protest against the lockdown on Oxford Street, in London, on Saturday. Reuters

Residents in Poland, parts of France and Ukraine's capital Ukraine all woke up to new restrictions, with most shops shut and people urged to work from home. 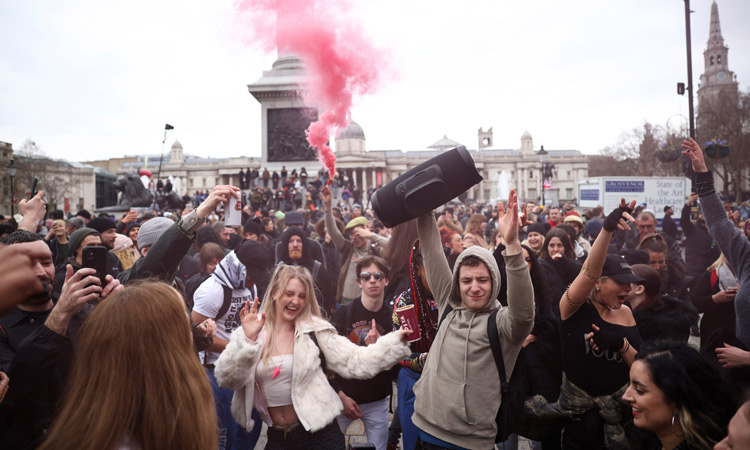 People dance during a protest against the lockdown in London. Reuters

"End the lockdown" and "Corona rebels", read signs held by demonstrators at the protest in Kassel, which was organised by a group that has drawn in activists from both the far-left and far-right as well as anti-vaxxers and conspiracy theorists.

The pandemic is still speeding up worldwide, with the number of new COVID-19 infections rising globally by 14 per cent over the past week, according to AFP data.

More than a third of France's population is now under a renewed lockdown as the country, along with several European neighbours, battles a third wave of the virus.

But the curbs are lighter than those enforced at the height of the pandemic last year, with schools remaining open and hairdressers, cobblers and chocolate shops added to an expanded list of businesses allowed to accept customers. 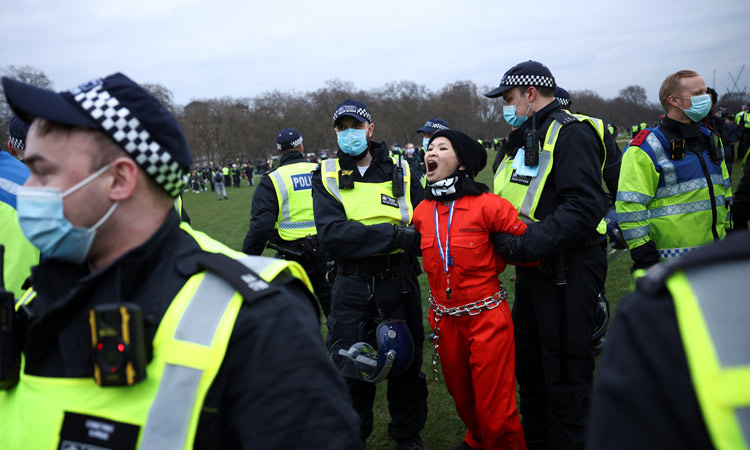 Police officers detain a person during a protest against the lockdown. Reuters

The government has also scrapped the forms once required to justify all trips outside the home, which were widely derided as an example of excessive French bureaucracy.

On the sunny banks of the River Seine, some Parisians questioned whether the restrictions could really be described as a "lockdown" at all.
"I can't see any change, apart from the closed shops," said a resident named Philippe, strolling with his daughter in the midst of cyclists and joggers.

The row over AstraZeneca's coronavirus vaccine meanwhile shows no signs of abating, with EU chief Ursula von der Leyen threatening to halt exports of the jab if the bloc does not receive its deliveries first.

The Anglo-Swedish pharma giant has delivered only 30 percent of the 90 million vaccine doses it had promised for the first quarter of the year, blaming production delays at its EU plants.

"We have the option of banning a planned export. That's the message to AstraZeneca: you fulfil your contract with Europe first before you start delivering to other countries," von der Leyen told Germany's Funke media group.

European officials are furious that AstraZeneca has fallen short on the continent while fully delivering on its UK commitments -- something that has allowed the recently-departed EU member to give half of its adult population at least one jab as of Saturday.

AstraZeneca has also had to contend with worries that its jab may cause blood clots, with more than a dozen countries pausing its use recently. 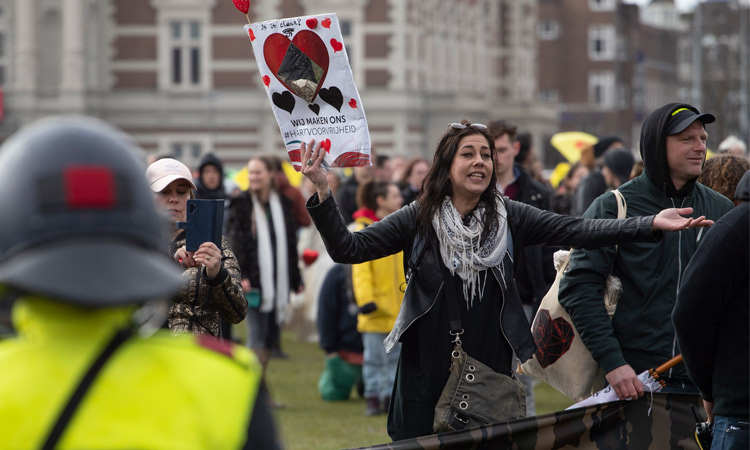 A protester holds a placard which translates to 'We Stand For Freedom' during a demonstration against lockdown in Amsterdam. AP

Several European countries including Germany and Italy resumed AstraZeneca vaccinations on Friday after an all-clear from EU regulators and the World Health Organisation.

But Scandinavian nations Denmark, Norway, Sweden and Finland have all said they want more information before deploying the vaccine again.

Seeking to reassure their populations, British Prime Minister Boris Johnson and his French counterpart Jean Castex both received a dose of AstraZeneca on Friday. "I literally did not feel a thing. It was very good, very quick," said Johnson who became seriously ill from Covid-19 last year.

With more than 400 million vaccine doses already injected globally, organisers of the Tokyo Olympics had previously billed this summer's Games as a chance to provide "proof of humanity's triumph over the virus." But on Saturday, Olympics chiefs announced that overseas fans would be banned as it remains too risky to invite large international crowds to Japan.

"We have to ensure a safe and secure environment for all the participants," said Tokyo 2020 chief Seiko Hashimoto. "It was an unavoidable decision."
The unprecedented ban will make the Tokyo Games the first ever without overseas spectators.