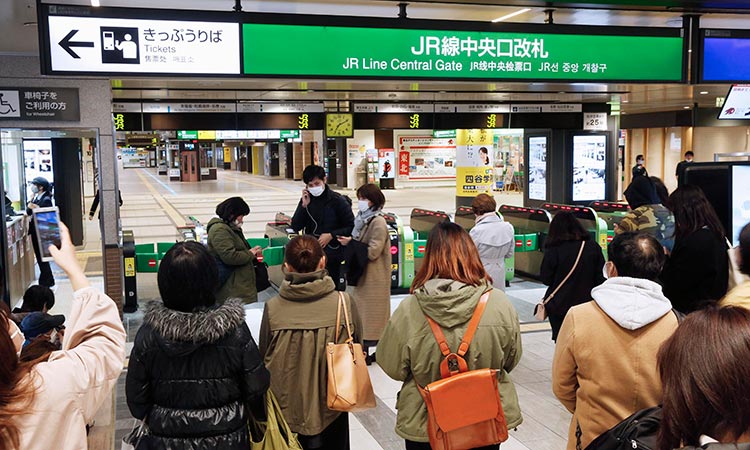 People gather in front of a ticket gate at a station as train services following an earthquake in Sendai, Japan, on Saturday. AP

Japan's meteorological agency issued a tsunami advisory on Saturday, after a strong 7.2-magnitude earthquake struck off the northeastern coast.

Public broadcaster NHK said, the quake hit the coast of Miyagi Prefecture at 6:26pm (0926 GMT) and had a magnitude of 7.2 at a depth of 60km (37 miles), the Japan Meteorological Agency said.

There was no immediate reports of damage from Miyagi, and local utilities were inspecting the status of the region's nuclear plants, according to local media.

Tohoku Electric Power Co has halted the Onagawa nuclear plant and is checking for any irregularities, NHK said.

NHK showed footage from inside its Sendai bureau showing a plaque suspended from the ceiling shaking for about 30 seconds following the tremor. It did not report any items falling from shelves or any immediate damage.

The quake could be felt in Tokyo about 400 km south of the epicentre.

NHK warned the public against coming anywhere near the shore.

Japan sits on the Pacific "Ring of Fire", an arc of intense seismic activity that stretches through Southeast Asia and across the Pacific basin.

The country is regularly hit by quakes and has strict construction regulations intended to ensure buildings can withstand strong tremors.