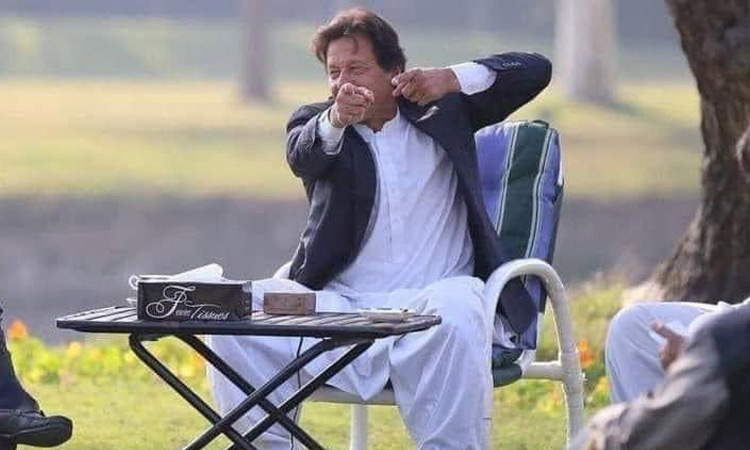 Imran Khan gestures during a party meeting in Islamabad. File

Prime Minister Imran Khan on Tuesday told the federal cabinet that he wanted the use of technology such as Electronic Voting Machines (EVM) in the elections and regular updates on mechanisms being developed to ensure overseas Pakistanis can vote.

He stated that elections in Pakistan should be similar to the US and cited the example of former US president Donald Trump who could not find any evidence of rigging "despite all his efforts."

The prime minister made the comments during the beginning of a session of the federal cabinet which was telecast live by state-run broadcasters. "We can't have the kind of elections which have happened in the past," Imran said. "We need to use EVM technology for transparent elections and I want regular updates on it.” The prime minister said that he wanted to avoid any excuses of "we're not prepared for this technology" when the time came to use EVMs.

He also mentioned a "frightening report" by the Financial Accountability, Transparency and Integrity (FACTI) panel. He said according to the report every year $1,000 billion are transferred from poor countries to rich countries and tax havens through money laundering. "Money belonging to poor countries, stolen through corruption, is lying in tax havens."

The premier said that the ruling elites and office holders of such countries have to send the ill-gotten wealth abroad otherwise it becomes noticeable. "They do this by weakening the institutions responsible for monitoring money laundering and illicit financial flows.

They bring in development projects not because the country needs them but because they get a lot of kickbacks. Mega projects with mega kickbacks, he said, adding that the kickbacks were then transferred abroad. "The nation has to pay for this by incurring debt and the price of that debt has to be paid through inflation."

He also said that in order to facilitate this transfer of money, the ruling elites made corruption acceptable in society and used their money to influence and pressurise the media and institutions. "This damages the morality of the nation."

The premier reiterated that even nations struck by great calamities could "stand back up", citing the examples of Germany and Japan in World War II. The greatest destruction is caused when morality is eliminated in a society, he said. "We saw this in the [Senate] election. Money was openly exchanged and everyone knows the drama we witnessed.”

The prime minister said that if a person such as former president Asif Ali Zardari "buys people through money, his intelligence and political vision [are praised]". The biggest damage this caused to the country was to make corruption acceptable, he added.

He said when a country had no moral authority, it couldn't mete out justice and would bring different laws for the rich and the poor.

"The powerful get (National Reconciliation Ordinance) NROs and deals while only the poor go to jail. A nation is destroyed when its ability to ensure justice is finished."