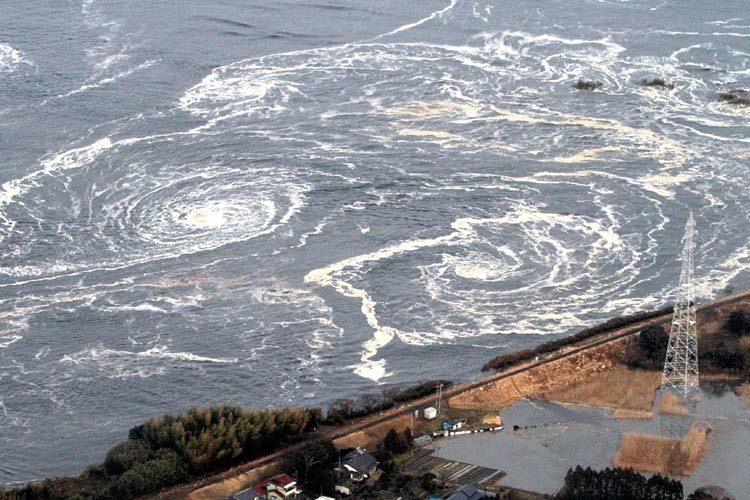 Whirlpools are seen following a tsunami and earthquake in Iwaki city. File / Reuters

A new tsunami advisory was issued for parts of New Zealand on Friday after a 7.4 magnitude earthquake struck near the Kermadec Islands on the northeast of New Zealand's North Island, just hours after strong tremors rattled much of the country.

This followed another large 7.2 magnitude earthquake about 900 kilometres away on the east of the North Island that struck just four hours earlier and was felt by tens of thousands, causing its own tsunami warning. This warning was later lifted.

"We expect New Zealand coastal areas to experience strong and unusual currents and unpredictable surges at the shore," the National Emergency Management Agency (NEMA) said in a tsunami advisory after the earthquake off the Kermadec Islands.

It asked people located between the Bay of Islands and Whangarei to stay off beaches and shore areas.

"Anyone near the coast who felt a LONG or STRONG quake should MOVE IMMEDIATELY to the nearest high ground, or as far inland as you can," the National Emergency Management Agency said in a tweet.

There was no immediate report of damages.

New Zealand government's seismic monitor Geonet pegged the quake at a magnitude of 7.2 with a depth of 94km.

More than 60,000 people reported feeling the quake on GeoNet's website, with 282 people describing the shaking as "severe" and 75 saying it was "extreme". Most others described it as light.

The closest major city to the epicentre is Gisborne with a population of about 35,500 residents. People near the coast from Cape Runaway to Tolaga Bay were told to evacuate.