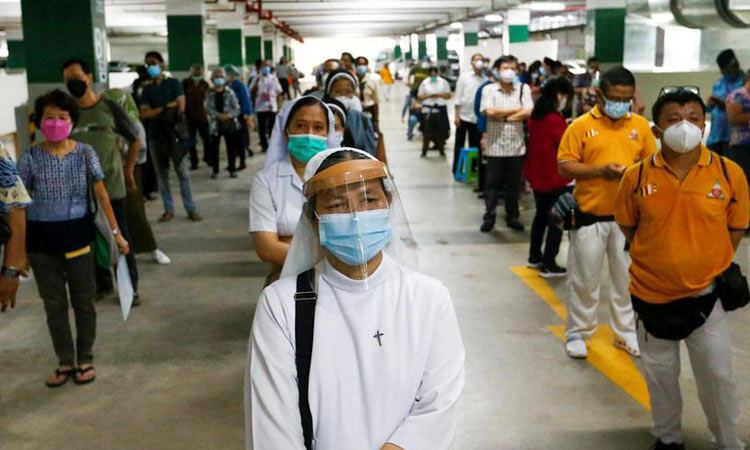 People stand in line while waiting to receive their first dose of China's Sinovac Biotech vaccine in Jakarta, Indonesia. File/Reuters

Indonesia has detected two cases of the more infectious COVID-19 variant first discovered in Britain, officials said on Tuesday, marking a potential new complication for the country as it tries to contain one of the worst coronavirus outbreaks in Asia.

“We’ll be facing this pandemic with a higher degree of difficulty,” he told a streamed conference.

Indonesia’s COVID-19 task force also confirmed cases of the variant, known as B117, had been found but declined further comment.

Since Indonesia announced its first cases of COVID-19 a year ago it has reported more than 1.3 million infections and 36,000 deaths, though daily infections have been falling recently after peaking in January and early February.

The British variant has also been found in other countries in Southeast Asia including Vietnam and the Philippines.

Riza Putranto, a genomics researcher in Jakarta, called for increased genomic surveillance in Indonesia and adherence of health protocols in order to combat the variant.

“We would need a comprehensive collaboration from many stakeholders to minimize the impact of this new variant in Indonesia,” he said.

While daily cases have been falling, the positivity rate - or the percentage of people tested who are found to have the virus - in the past week has still been hovering around 20%.

The World Health Organization has said a positivity rate of less than 5% is required to indicate that an epidemic is under control.

The world’s fourth most populous country aims to vaccinate more than 181 million people in a bid to reach herd immunity. It launched a mass inoculation programme in January starting with medical workers, civil servants and the elderly.