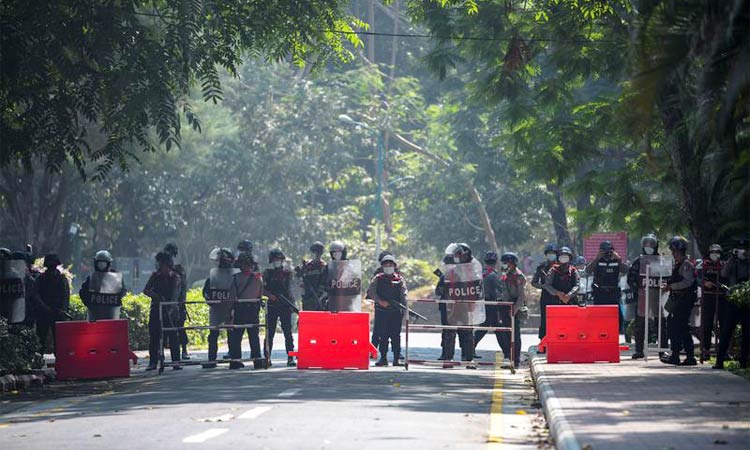 Riot police officers stand guard during a rally against the military coup at the University of Yangon, in Yangon, Myanmar. Reuters

Myanmar police launched a crackdown overnight in a neighbourhood of the main city of Yangon to break up a protest against a military-appointed official, as the World Bank said it would not process requests for funds made after the Feb.1 coup.

The Southeast Asian country has been in crisis since the army seized power and detained civilian government leader Aung San Suu Kyi and much of her party leadership after the military complained of fraud in a November election.

There have been daily protests and strikes by democracy supporters for about three weeks, often drawing hundreds of thousands of people across the diverse country.

Riot police fired tear gas in Yangon’s Tamwe neighbourhood to disperse a crowd protesting against the replacement of an official in charge of the district by one appointed by the military, according to witnesses and live-streamed video.

Tamwe residents said they heard repeated shots and that police had remained in some parts of the district until around 2am on Friday.

“We were really scared,” said one resident who declined to be identified.

Residents found what appeared to be fragments of stun-grenade casings on the streets in the morning, along with numerous flip-flops abandoned by fleeing protesters.

The confrontation illustrates the defiance the military is facing in various walks of life as it seeks to reimpose its authority on a population that had been growing used to civilian rule under Suu Kyi’s government.

Suu Kyi’s supporters said on social media that they intended to hold another protest in Tamwe on Friday.

The spokesman for the ruling military council did not respond to telephone calls seeking comment.

Earlier on Thursday, violence broke out in Yangon when a crowd of about 1,000 military loyalists attacked pro-democracy supporters and media.

Several people were beaten by groups of men, some armed with knives, others firing catapults and hurling stones, witnesses said. At least two people were stabbed, video footage showed.

But in another example of defiance that would have been unthinkable under previous juntas during almost 50 years of military rule, media organisations said on Thursday they would not comply with an order to refrain from using words like “coup” to refer to the ouster of the elected government.

The army said its overthrow of the government was within the constitution after its complaints of fraud in the Nov. 8 election, swept by Suu Kyi’s party, had been ignored. The election commission said the vote was fair.

“This is very important for our future,” said Nyein Chan Sithu, 21, gathering with hundreds of other mostly young people in central Yangon for a protest.

“We want a government that treats people with respect. My generation will be the last to fight a junta.”

The crisis raises the prospect of growing international isolation and investor jitters compounding difficulties for an economy already weighed down by the coronavirus.

The World Bank has halted payments to projects in Myanmar on withdrawal requests that were made after the coup, the bank said in a letter to Myanmar’s finance ministry seen by Reuters.

World Bank President David Malpass said last week it was taking an “extra cautious” approach to Myanmar but was continuing to execute past projects, including emergency coronavirus relief.

Last year, the World Bank approved more than $350 million in new loans and grants to help Myanmar deal with the coronavirus and to support farmers and rural employment.

The United States, Britain and others have called for Suu Kyi’s release and the restoration of democracy, and have imposed limited sanctions aimed at the junta and its business links.

The army has promised a new election after reviewing voter lists. It has not given a date but it imposed a one-year state of emergency when it seized power.

Suu Kyi has been detained at her home in the capital Naypyitaw and her party says its November victory must be respected.