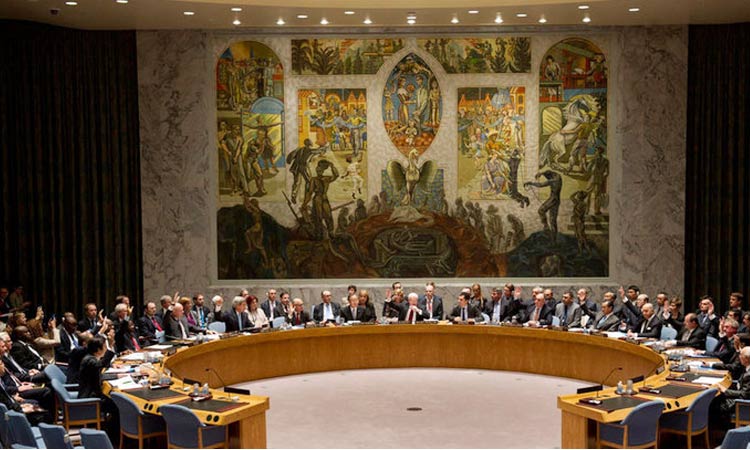 Members of the Security Council vote on the resolution. File

The UN Security Council on Tuesday failed to agree on a joint declaration on war-torn Syria, capping a day of negotiations in which the organization’s special envoy to the country called to jump-start the deadlocked peace process.

Russia, Syria’s main ally, repeatedly blocked negotiations on the matter, diplomats said, although Moscow did not respond to a request for comment as to why.

The conflict in Syria, which broke out after the brutal suppression of anti-government protests in 2011, has killed more than 380,000 people and displaced millions. 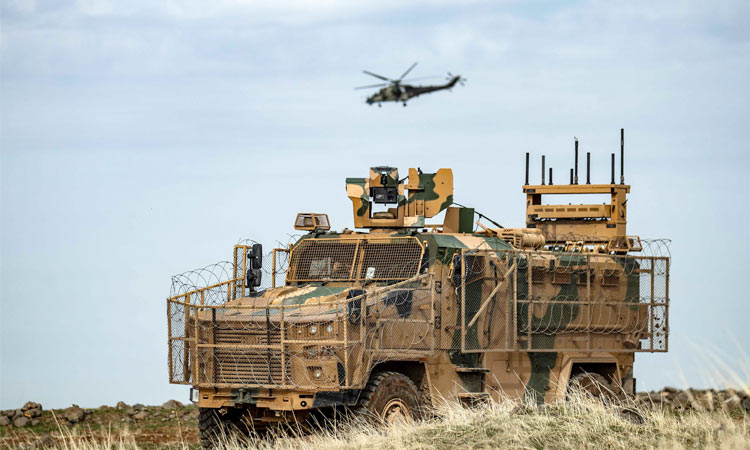 A Russian helicopter flies above a Turkish military vehicle, part of a joint convoy with Russian troops, patrolling in Syria close to the Turkish border. File/AFP

Endless rounds of UN-backed peace talks in the decade since have failed to stem the bloodshed and in recent years have been largely overtaken by parallel negotiations led by Russia and Turkey.

“The current divisions in the international community need to be bridged,” Geir Pedersen, the UN special envoy for Syria, told journalists earlier in the day following a Security Council videoconference.

Pedersen said that without “constructive international diplomacy” on Syria, it was unlikely that “any track — constitutional track or any other — will really move forward.”

Diplomats said the failure to agree a declaration was due to Russia, which had made demands unacceptable to Western nations.

“The Russians are asking too much,” a diplomat said on condition of anonymity.

The council’s monthly meeting on Syria is usually public, but officials kept the session private after a meeting of the Syrian Constitutional Committee in Geneva last month ended with no progress.

“The aim was not to create a debating club, but to give Syrian people a way out from a 10-year long conflict,” he said, according to a copy of his speech that was released after the meeting.

“It is clear to everyone that the Syrian Government has just taken advantage of these meetings to delay any real reconciliation.”

The committee was created in 2019 to modify Syria’s 2012 constitution, which directs the organization of elections under UN supervision.

“Session five of the Constitutional Committee was a missed opportunity and disappointment,” Pedersen said of the January meeting, which included the Syrian regime, the opposition and civil society.

Diplomats told AFP that Western powers were unanimous during the Tuesday’s meeting in decrying the “failure” of the political process.

One representative accused the constitutional committee of having achieved nothing, and blamed the Syrian regime for “delay tactics.”