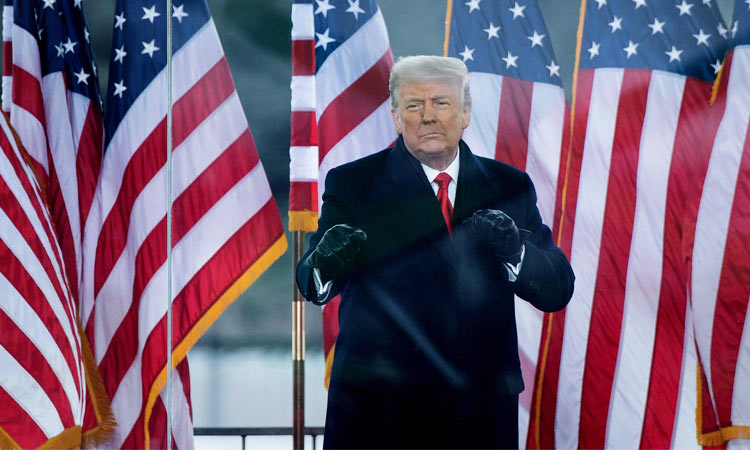 US President Donald Trump greets supporters on The Ellipse near the White House in Washington, DC. File/AFP

Donald Trump’s second impeachment trial began on Tuesday with harrowing video footage of his supporters’ assault on Congress as opening arguments will begin in Trump's impeachment trial after an emotional first day ended with the Senate voting.

Republican senators made clear how difficult to hear the case for convicting the former president of inciting the riot at the US Capitol was even though he is no longer in office.

The heavy emotional weight of the trial punctuates Trump’s enduring legacy as the first president to face impeachment trial after leaving office and the first to be twice impeached. While many minds are made up, the senators will face their own moment to decide whether to convict or acquit Trump of the sole charge of "incitement of insurrection.” 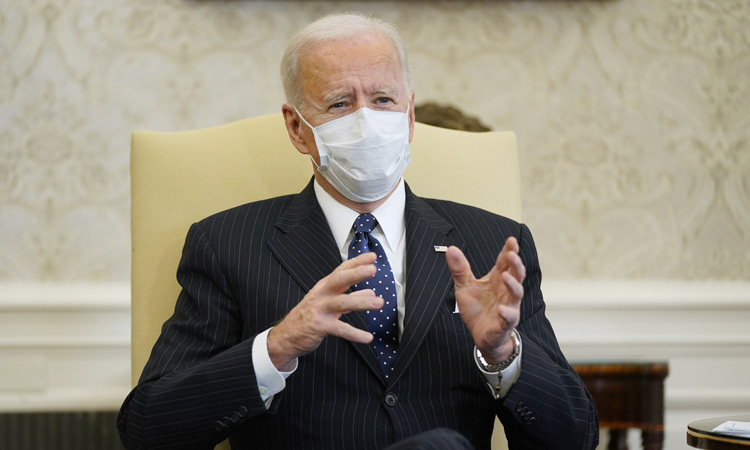 US President Joe Biden meets with business leaders in the Oval Office of the White House in Washington. AP

Senators voted 56-44 in favour of the constitutionality of the historic trial, rejecting a bid by Trump’s lawyers to throw it out on grounds that a former president cannot be tried by lawmakers, according to AFP.

The vote, held before the main part of the trial was to get under way on Wednesday, saw six Republicans join all 50 Democrats in the evenly divided Senate.

Despite this modest show of bipartisanship, the result highlighted the nearly impossible task of getting the two-thirds majority — requiring 17 Republicans to join the Democrats — that would be needed to convict Trump of inciting insurrection.

Earlier, both sides presented their opening cases, with Democrats arguing that Trump broke his oath in a naked bid to retain power after losing the November election to Joe Biden.

Refusing to accept his defeat, Trump spread lies about vote rigging and repeatedly pressured officials, including then vice president Mike Pence, to try and stop the transfer of power. 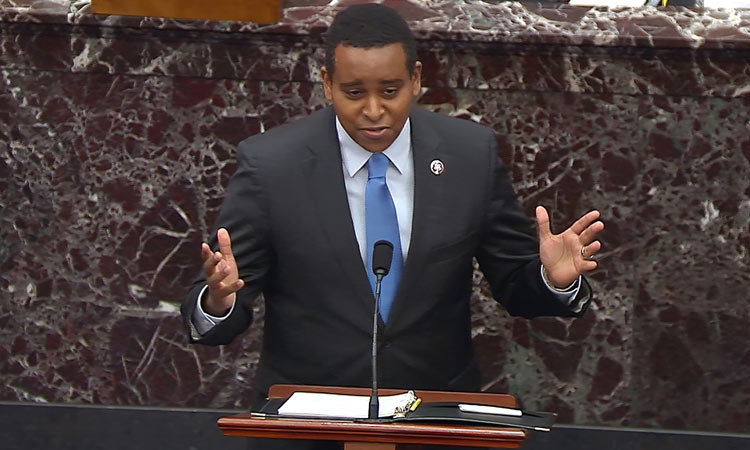 Joe Neguse speaks during the second impeachment trial of former President Donald Trump in the Senate at the US Capitol. AP

Finally, on Jan.6, Trump told enraged Republican supporters near the White House to “fight like hell.” The crowd, chanting “stop the steal,” then attacked Congress, where Pence and lawmakers were in the process of certifying Biden’s victory.

“If Congress were to just stand completely aside in the face of such an extraordinary crime against the Republic, it would invite future presidents to use their power without any fear of accountability,” Democratic impeachment manager Joe Neguse said.

Video from the Jan.6 mayhem played back inside the ornate Senate packed the biggest punch. 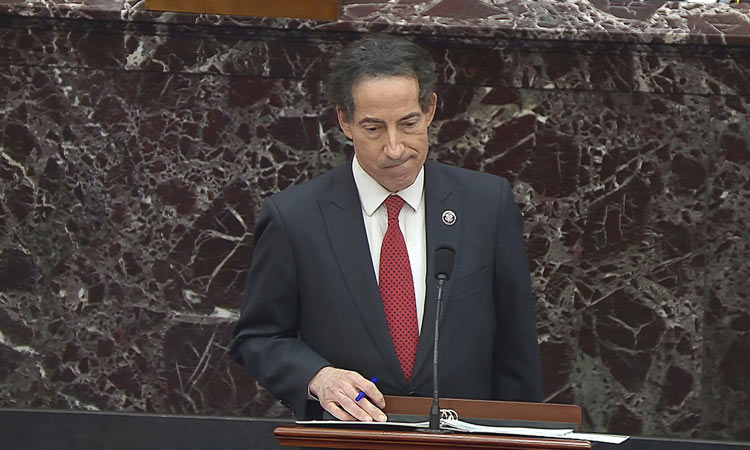 Jamie Raskin speaks during the second impeachment trial of Donald Trump in the Senate at the US Capitol in Washington. AP

Senators — who witnessed the events firsthand when they had to be rushed to safety that day — watched raw footage of Trump’s speech and the crowd’s ensuing assault on the Capitol.

The video montage showed the mob chanting pro-Trump slogans as it smashed through doors, swarmed police, and managed for the first time in history to disrupt the Congressional vote certifying the election.

“If that’s not an impeachable offense, then there is no such thing,” lead impeachment manager Jamie Raskin said.

Fighting tears, Raskin recounted how he and his family — who were visiting to watch the certification — had been trapped, listening to “the sound of pounding on the door like a battering ram, the most haunting sound I have ever heard.”

“This cannot be the future of America,” he implored senators.

The Democrats “selectively put out some things that were pretty hard-hitting,” he said, adding he had not decided on his final impeachment vote.

Trump lawyer David Schoen, however, said the Senate had no jurisdiction to try Trump once he had left office and warned that the impeachment threatened to “tear this country apart.”

It will leave the United States “far more divided and our standing around the world will be badly broken,” he argued.

Republican Senator Bill Cassidy, who voted to allow the trial to proceed, tweeted that the Democrats had “much stronger constitutional arguments” than Trump’s lawyers.

Trump is the first president ever to face two impeachment trials — he was already acquitted in 2020 of abuse of power — as well as the first in history to be tried after leaving the White House.

His team is basing its case largely on the procedural argument that a former president cannot be tried, calling the Senate trial “absurd.”

They also argue that whatever Trump said during his January 6 rally is protected by the constitutional right to free speech and did not amount to ordering the assault on Congress.

The trial is clearly uncomfortable for many Republican senators, who, like their Democratic colleagues, had to flee to safety during the violence. Reminders of the mayhem are everywhere around them, with thousands of National Guard troops still deployed around the newly fortified Capitol building.

Despite this, a second acquittal is all but certain for Trump, who is holed up in his luxury Mar-a-Lago resort in Florida.

Amped up on four years of Trump’s populist claims to be fighting for ordinary people against the elites, huge numbers of Republican voters continue to support the ex-president, pushing their party ever further to the right.

Polls show that a small majority of the country overall believes Trump deserves conviction. An Ipsos/ABC News poll found 56 per cent back this, while a Gallup poll found 52 per cent support.

Among Republicans, however, an overwhelming majority opposes convicting Trump.

Biden above the fray

Biden, who succeeded Trump on Jan.20, is attempting to stay above the fray.

Daily, the White House is sending a message that the Democrat is focused instead on the fragile economy and the desperate effort to vaccinate Americans against the still out-of-control Covid-19 pandemic.

When asked on Tuesday about the trial, Biden said little.

“I have a job,” he said. “The Senate has their job and they are about to begin it and I am sure they are going to conduct themselves well.

If Trump were convicted, the Senate would then hold a simple-majority vote on barring him from future public office.

But even if the trial ends in acquittal, calls to punish Trump for his behavior will likely continue, including possibly a push for a bipartisan vote of censure.