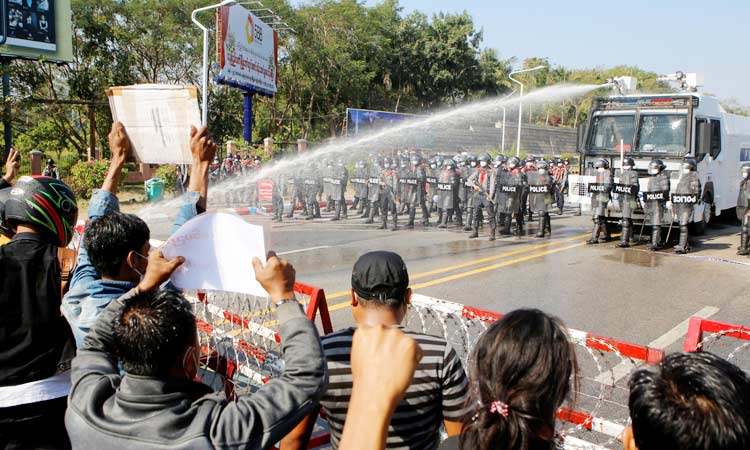 Police fire a water cannon at protesters rallying against the military coup in Naypyitaw, Myanmar. Reuters

Protesters opposed to Myanmar’s military coup defied bans on big gatherings to extend the largest demonstrations in more than a decade on Tuesday, chanting and confronting police who fired water cannons and arrested more than two dozen people. 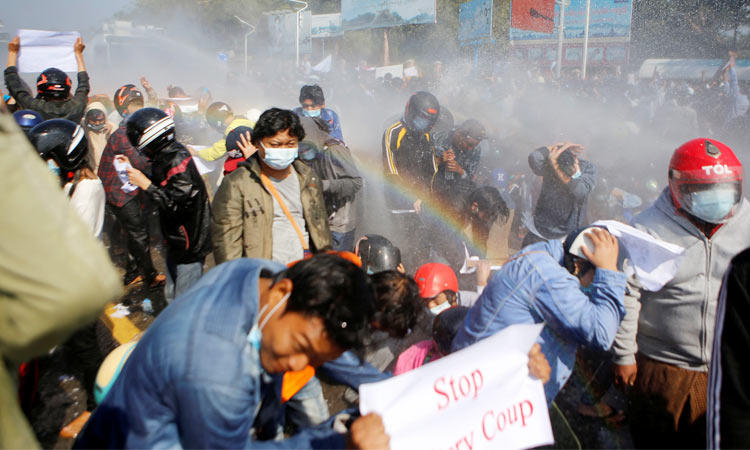 Police fire a water cannon at protesters rallying against the military coup in Naypyitaw, Myanmar. Reuters

Myanmar police fired water cannon at peaceful protesters in the country’s capital Naypyitaw for a second day, as the crowd refused to disperse, video posted on Facebook showed. Video in Bago, northeast of the commercial hub of Yangon also showed police firing water cannon and confronting a large crowd. 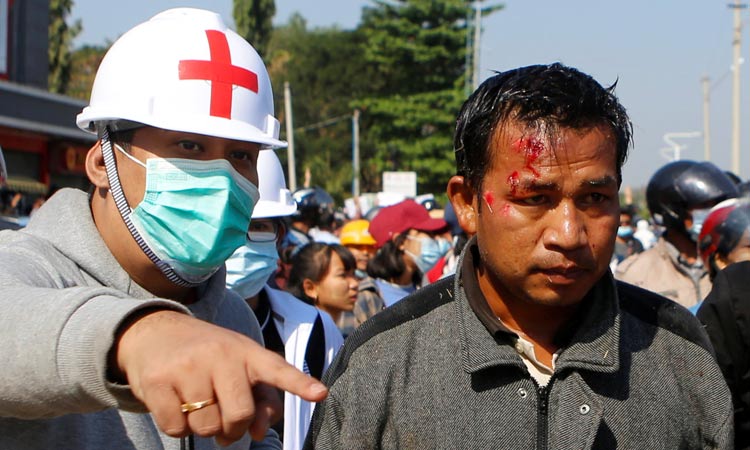 An injured protester looks on next to medical personnel, as protesters rally against the military coup in Naypyitaw, Myanmar. Reuters

The unrest has revived memories of almost half a century of military rule that lasted until 2015.

“The coup always come into our thoughts, every time we eat, work and even during resting time,” said Yangon resident Khin Min Soe. “We are so disappointed and so sad whenever we think about why this has befallen us again.”

Promises on Monday from junta leader Min Aung Hlaing to eventually hold a new election in his first address since seizing power drew scorn. He repeated unproven accusations of fraud in last November’s election, won by Suu Kyi’s National League for Democracy (NLD) in a landslide. 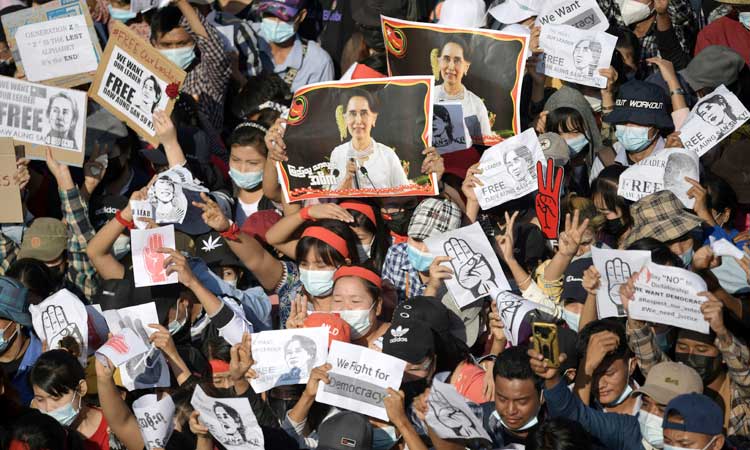 People join a rally against the military coup and to demand the release of elected leader Aung San Suu Kyi, in Yangon, Myanmar. Reuters

“We will continue to fight,” said a statement from youth activist Maung Saungkha, calling for the release of political prisoners and the “complete collapse of dictatorship.”

Activists are also seeking the abolition of a constitution that gave the army a veto in parliament and for federalism in ethnically-divided Myanmar.

An older generation of activists formed during bloodily suppressed protests in 1988 called for the continuation of the strike action by government workers for another three weeks.

The civil disobedience movement, led by hospital workers, has resulted in a plunge in coronavirus tests, official testing figures showed.

Myanmar has suffered one of the worst coronavirus outbreaks in Southeast Asia with a total of 31,177 deaths from more than 141,000 cases.

After tens of thousands of people took to the streets across Myanmar in recent days, local orders banning gatherings of more than four people were imposed. The US Embassy said it had received reports of an 8 p.m. to 4 a.m. local time curfew in the two biggest cities, Yangon and Mandalay.

There was no further comment from authorities on the measures to stop protesters.

In his first televised address as junta leader on Monday, Min Aung Hlaing said the junta would form a “true and disciplined democracy,” different to previous eras of military rule which left Myanmar in isolation and poverty.

“We will have a multiparty election and we will hand the power to the one who wins in that election, according to the rules of democracy,” he said. The electoral commission had dismissed his accusations of fraud in last year’s ballot.

Min Aung Hlaing gave no time frame but the junta has said a state of emergency will last one year.

Western governments have widely condemned the coup, although there has been little concrete action so far to put pressure on the generals.

New Zealand said on Tuesday it will suspend all high-level political and military contact with Myanmar, ensure aid does not benefit the military and impose a travel ban on its leaders.

A prominent Singapore businessman plans to exit his investment in a Myanmar tobacco firm linked to the military, joining Japanese drinks giant Kirin Holdings which last week scrapped its beer alliance in the country.

The UN Security Council has called for the release of Suu Kyi and other detainees. The UN Human Rights Council will hold a special session on Friday to discuss the crisis at the behest of Britain and the European Union.

Suu Kyi won the Nobel Peace Prize in 1991 for campaigning for democracy and spent nearly 15 years under house arrest.

The 75-year-old faces charges of illegally importing six walkie-talkies and is being held in police detention until Feb.15.

Her lawyer said he has not been allowed to see her. The US State Department said it tried to reach her, but was denied.

Suu Kyi remains hugely popular at home despite damage to her international reputation over the plight of the Muslim Rohingya minority. 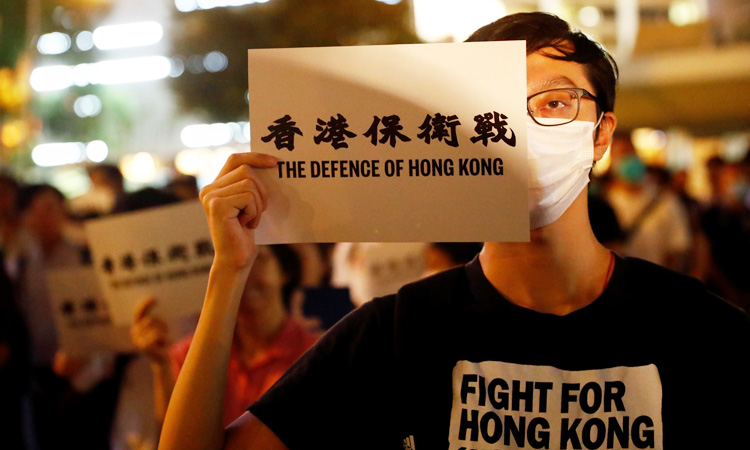