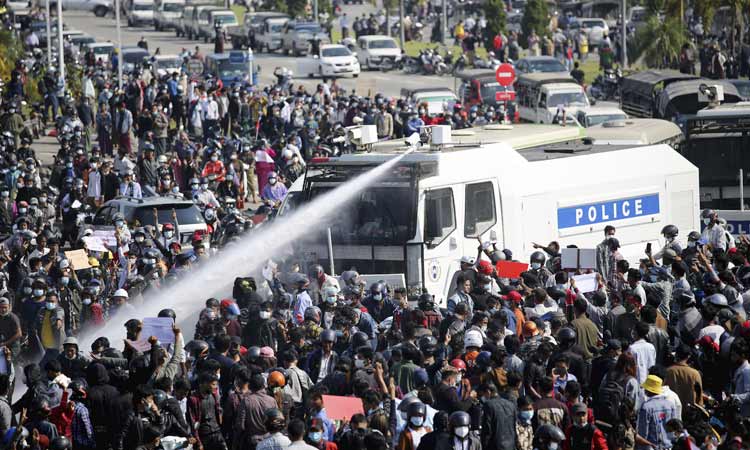 A police truck uses a water cannon to disperse a crowd of protesters in Naypyitaw, Myanmar. AP

Tension in the confrontations between the authorities and demonstrators against last week’s coup in Myanmar boiled over Monday, as police fired a water cannon at peaceful protesters in the capital Naypyitaw.

On Sunday, in the town of Myawaddy on Myanmar’s eastern border with Thailand, police shot into the air in an evident effort to disperse a rowdy crowd. There had been no initial reports of injuries, but the Assistance Association for Political Prisoners, an independent watchdog group, said one woman had been shot, without providing further details. 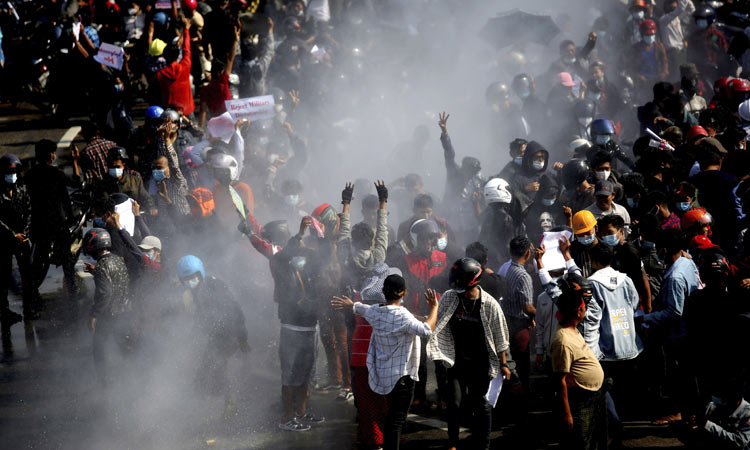 Protesters are sprayed with water fired from a police truck's water cannon in Naypyitaw, Myanmar. AP

There have been no signs that either protesters or the military was backing down in their confrontation over who is the country’s legitimate government: Aung San Suu Kyi's National League for Democracy party, which won a landslide victory in last November’s election, or the junta that formed one week ago and which claims the polls were marred by voting fraud.

Nonviolent protests demanding the release of the detained Suu Kyi and restoration of her government have spread all over the country, with awareness of them growing after the authorities on Sunday lifted a brief ban on internet access. 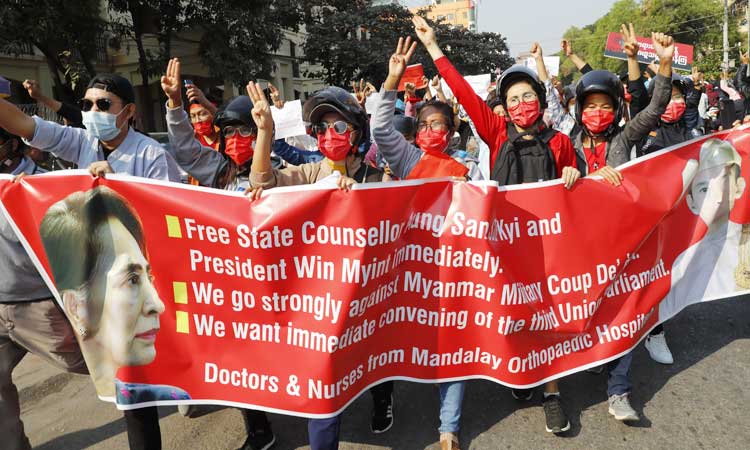 State media appears to have ignored the protests, but videos and reports on the demonstrations were being posted by social media users.

There were reports of new protests on Monday in Kachin State in the north, Mon State in the southeast, Tachileik, a border town in eastern Shan State, Naypyitaw and Mandalay, the country’s second largest city, where there were both marchers and a procession of motorbikes.

The protests in Naypyitaw, ongoing for several days, have been especially unusual, for a great part of the city’s population are civil servants and their families. The city was purpose-built under a previous military government, has a heavy military presence and lacks the tradition of protest of the former capital, Yangon. 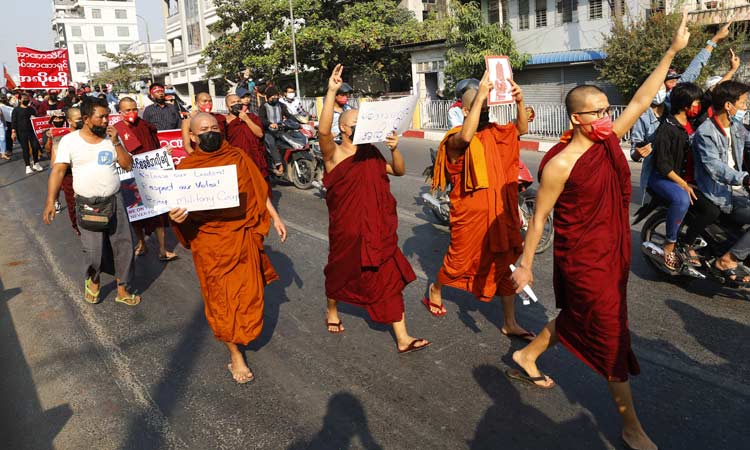 A morning protest in Yangon, Myanmar’s biggest city, swelled rapidly with the crowd exceeding a thousand demonstrators at a major downtown intersection.

They chanted slogans, raised a three-finger salute and carried placards saying “Reject the military coup” and “Justice for Myanmar.” Some smaller groups broke off from the main protest and headed to the Sule Pagoda, a past rallying point for major protests against previous ruling juntas.

On Sunday, the golden-domed pagoda served as a rallying point for tens of thousands of demonstrators, as it did protesters against military rule during a massive 1988 uprising and again during a 2007 revolt led by Buddhist monks.

The military used deadly force to end both of those uprisings, with estimates of hundreds if not thousands killed in 1988. While riot police have watched the protests this past week, soldiers have been absent and there have been no reports of major clashes.

The growing protests are a sharp reminder of the long and bloody struggle for democracy in a country that the military ruled directly for more than five decades before loosening its grip in 2012. Suu Kyi’s government, which also won a landslide election in 2015, was the first led by civilians in decades, though its power was limited by a military-drafted constitution.

A call for a general strike was issued late Sunday by several activist groups in Yangon, but it was not clear if it had been widely circulated or adopted by the informally organized civil disobedience movement at the forefront of the protests.

The Assistance Association for Political Prisoners in Myanmar, an independent watchdog group, says 165 people, mostly politicians, had been detained since the Feb.1 coup, with just 13 released.

One foreigner has been confirmed held by the authorities, Sean Turnell, an economist at Australia’s Macquarie University who was an adviser to Suu Kyi’s government. He was detained on Saturday under unclear circumstances.

A statement issued on Monday by the office of Australian Foreign Minister Marise Payne said he was being provided with consular support and described him as “a highly regarded advisor, member of the academic community.”

“We certainly believe he should be immediately released,” it said.

The military has accused Suu Kyi’s government of failing to act on its complaints that last November’s election was marred by fraud, though the election commission said it had found no evidence to support the claims.

The elected lawmakers of Suu Kyi’s party have asked for international recognition as the country’s government after meeting online on Friday to declare themselves as the sole legitimate representatives of the people. The military barred them from convening Parliament last week.