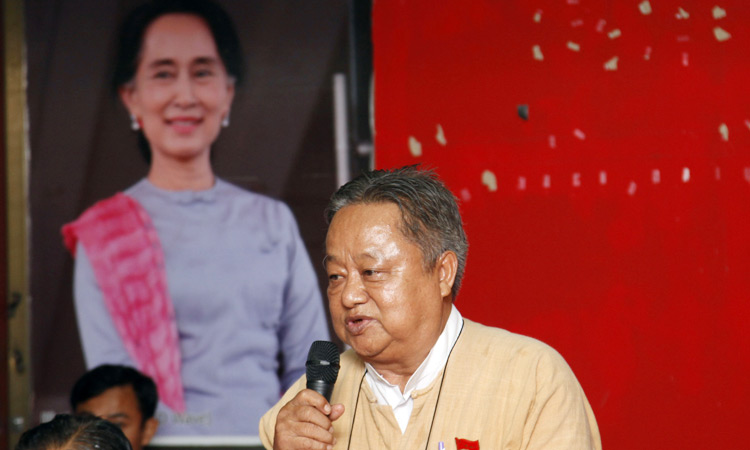 Win Htein talks to journalists during a press conference at the headquarter of NLD in Yangon, Myanmar. File/AP

A key aide to ousted Myanmar leader Aung San Suu Kyi was arrested on Friday, days after a coup that has sparked outrage and calls by US President Joe Biden for the generals to relinquish power.

The arrest came after the streets of Myanmar’s biggest city filled for a third night with people banging pots and honking car horns, voicing their opposition to Monday’s coup.

On Friday dozens of teachers at Yangon’s Dagon University staged a rally where displayed a three-finger salute borrowed from Hong Kong and Thailand’s democracy movements, and sang a popular revolution song. 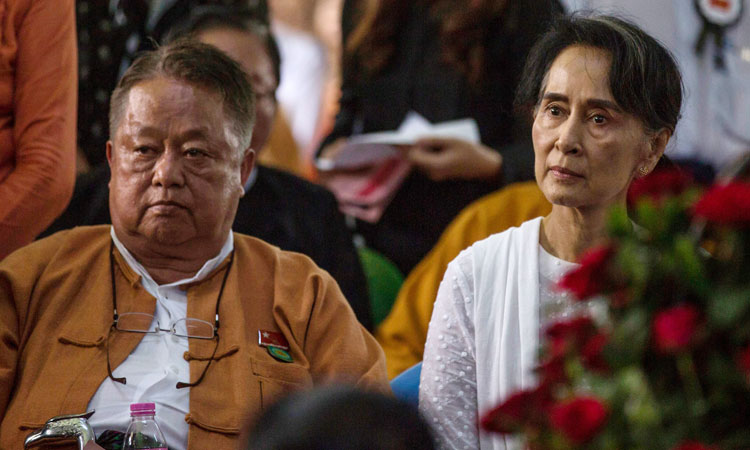 The 79-year-old NLD stalwart has spent long stretches in and out for detention for campaigning against military rule. 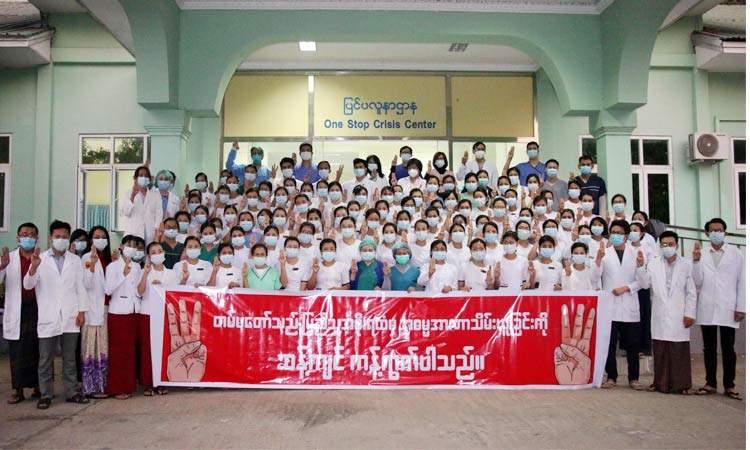 Medical staff hold up a three-finger salute and a banner during a protest against the military takeover at a hospital in Naypyidaw. AFP

Ahead of his arrest, Win Htein told local media that the military putsch was “not wise,” and that its leaders had taken the country “in the wrong direction.”

“Everyone in the country should oppose as much as they can the actions they are seeking to take us back to zero by destroying our government,” he told Frontier Myanmar in the coup’s aftermath.

Suu Kyi has not been seen in public since Monday.

According to the Assistance Association for Political Prisoners, a Yangon-based group that monitors political arrests in Myanmar, more than 130 officials and lawmakers have been detained in relation to the coup.

At least 14 activists and prominent pro-democracy figures have also been arrested, AAPP said.

On Thursday, the nephew of filmmaker Min Htin Ko Ko Gyi — who has previously been jailed for criticising the military — confirmed his outspoken uncle had been picked up on the morning of the coup.

“I think they arrested all dissidents who could share the right information to the public,” said Kaung Satt Naing.

Telecom providers in the country have been ordered to cut access to Facebook, the main means of communication and accessing the internet for millions of people in Myanmar.

I can’t accept this coup

With Facebook stifled, more Myanmar people have moved to Twitter in recent days or started using VPN services to bypass the blockade.

Hashtags opposing the coup — including #HearTheVoiceofMyanmar and #RespectOurVotes — were trending, Friday, with more than seven million posts citing them.

A so-called Civil Disobedience Movement has gathered steam online, calling on the public to voice opposition every night by banging pots and clanging cymbals to show their anger.

At 8pm on Thursday, a cacophony erupted from Yangon neighbourhoods, with cars honking to join the chorus of dissent.

“I haven’t been able to sleep or eat since the coup,” Yangon resident Win Bo told AFP, adding that he was “a frontliner” during the 1988 uprising.

That pro-democracy movement ended in a bloody crackdown that killed thousands of protesters and monks campaigning against the junta.

“Now I am facing it again,” he said. “I can’t accept this coup. I want to do an armed revolution if possible.”

So far, no large-scale protests have been seen, although small pockets of dissent have popped up, with doctors sporting red ribbons, the NLD’s colour.

About 70 NLD MPs on Thursday convened a symbolic parliament at their compound in Naypyidaw, signing a pledge that they would serve the people.

The putsch has drawn condemnation globally.

On Thursday, President Biden reiterated his call for the generals to reverse course.

“The Burmese military should relinquish power they have seized, release the advocates and activists and officials they have detained, lift the restrictions in telecommunications, and refrain from violence,” Biden said.

He spoke hours after his National Security Advisor Jake Sullivan said the White House was “looking at specific targeted sanctions both on individuals and on entities controlled by the military that enrich the military.”

He did not give further details.

The United Nations Security Council took a softer tack, voicing “deep concern” — a step down from a draft Tuesday that had condemned the coup.

Diplomats said veto-wielding China and Russia, Myanmar’s main supporters at the UN, had asked for more time on Tuesday to finesse the council’s response.

There have been calls on multinational companies working with Myanmar’s military-linked businesses to cut ties as a way to pressure the generals.

Japanese beer giant Kirin said on Friday it was terminating its joint venture with a military-owned conglomerate. Kirin has been under scrutiny for some time over its ties to Myanmar’s army-owned breweries.