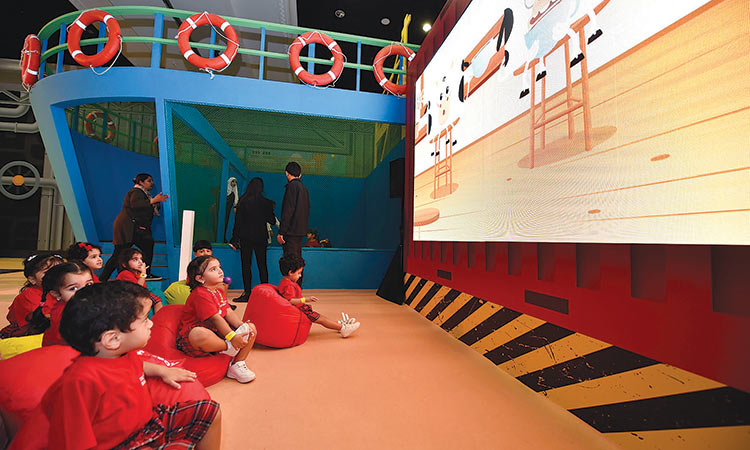 “The effort that we put in, the time we give, and the possibilities and partnerships we have with like-minded entities across the globe promoting quality children’s cinema, gives me hope,” said the filmmaker, during the Children’s Cinema Global Forum, hosted by the Sharjah International Film Festival for Children and Youth (SIFF) and the Lahore International Children’s Film Festival, on Friday and Saturday.

UAE to go on helping patients of neglected tropical diseases

The two-day virtual Forum had several thought-provoking discussions focusing on ‘Children’s Cinema – Past and Future’ that offered an insight into the potential of cinema as a tool for entertainment, education and learning in the future.

French director and academic Prof. Dragan M. Fimon said that to empower children, visual medium educators must tell stories from everyday life that children can relate to and which are rooted in their respective social and cultural backgrounds. Involving children in the filmmaking process and ensuring their active participation is vital to present stories from their point of view.

Meenakshi Vinay Rai, Director of Chinh India Film Festival, India, said, “The future of cinema is not what adults can create for children — they need a different kind of energy that can be realised only through their creativity; we can only provide a guiding framework to build on.”

Describing her experience of working with children who have created “bold and brutally honest cinema” that reflect their realities and are often beyond the comprehension of adults, she added, “What is required from our generation is a great level of tolerance to accept what we do not understand.”

At a session titled ‘Festivals in 2020 and Post COVID-19’, audiences heard about the challenges that were faced by organisers of the most prestigious film festivals, globally, faced in the aftermath of the worst health crisis in over a century.

Recounting how the Los Angeles International Children’s Film Festival was ready to go for their 2020 edition by December 2019, Bennett noted, “Suddenly it became apparent that it wasn’t going to go. The lockdown was immediate and drastic, and left us with no time to react.”

Eventually, Bennett and his team at the LA International Children’s Film Festival wrapped their head around the situation and pivoted to leverage all available digital bridges — Facebook, Twitter, Instagram — to connect with audiences of all age groups. Their digital platforms allow organisers and viewers the opportunity to offer inputs about film selections, and connect filmmakers to their audiences.

“We’re going to do an in-person festival in December if health and safety guidelines permit,” noted a positive and hopeful Dan.

Claudio Gubitosi, who has been the director of Giffoni Film Festival since its inception, said the pandemic struck during the year the organisers were planning the event’s 50th edition. “Last March, I realised I quickly needed a Plan B. It was important to not lose touch with my community. We have millions of Giffoners around the world, and I had to find a way to reassure them that Giffoni is here, and it is here to stay.”

During the first lockdown in Italy, from March - May, the festival set up Zoom discussions with actors, politicians, doctors, filmmakers because he felt a need to keep the community together, and engaged.

“I sensed a frailty in both industry and in community,” he noted that he had several apprehensions about how he would present an in-person event in a way that ensures everybody’s safety and wellbeing.