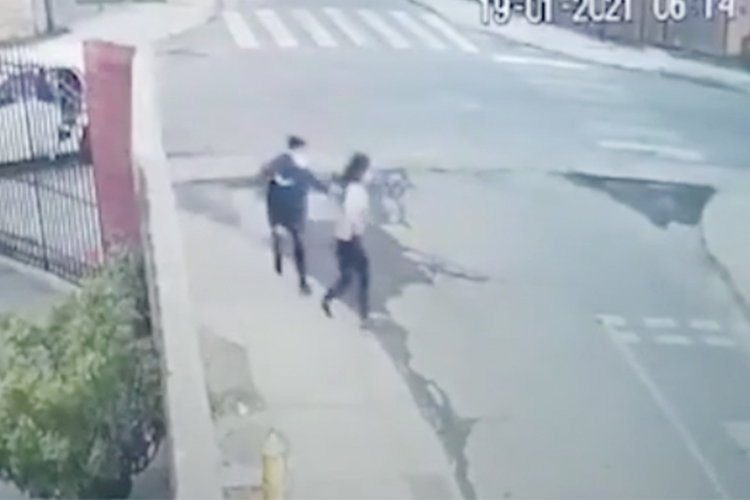 A videograb shows the robber assaulting the woman.

A young Chiliean detective thwarted a robbery attempt in Renca using her firearm to shoot the assailant. He was wounded and was later detained by police.

The incident occurred around 6am when the woman was heading to her workplace before being approached by an unknown person of Venezuelan origin.

"A detective from our unit was going to her place of work, she was unexpectedly intercepted by some persons who were moving in a private vehicle. A man with a firearm got out of the car and intimidated her in order to steal her belongings," said Commissioner Juan Pardo, chief of the Special Police Investigations Brigade.

Pardo said that "this detective, recently graduated with two weeks work experience, applied everything taught in our school, proceeding to extract her service weapon and shoot the subject who threatened her."

The other subjects who were in the vehicle fled while the wounded man remained on the floor.

The victim informed her family and police personnel about what happened.

The wounded man was transferred to the hospital where the police arrested him.

The case has already been made available to the North Central Prosecutor's Office to begin the investigation and find the other alleged perpetrators of the crime.

Meanwhile, the apprehended subject, who already had a conviction for the same crime, was sent to a detention centre.

Gang assaults a man, snatches Dhs10,000 from him in Dubai

​Official records indicate that the victim was heading out of a grocery shop and walking down the street, when he was suddenly interrupted by a vehicle on the road, and a gang of seven Asians got out of the car and attacked him.