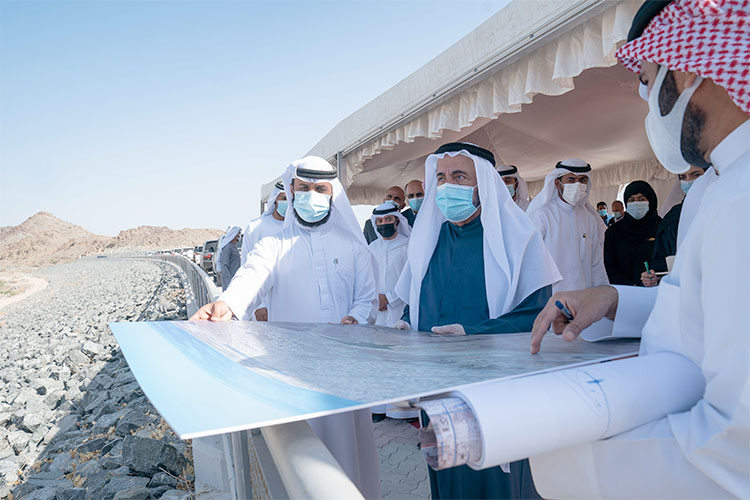 His Highness’s inspection tour comes within the framework of His Highness’s keenness to personally review the progress work of a number of projects that he had directed during his previous visits to the city, which contribute to the development of the region’s infrastructure, as well as the tourism facilities in the region.

The Ruler of Sharjah began his tour by inspecting the Jabal al-Kitab resthouse project, being constructed above sea level in Kalba, and linked to the city of Kalba through the Wadi Al-Hilu tunnel and the Sharjah-Kalba road.

His Highness was briefed from Salah Bin Butti Al Muhairi about the project, which aims to connect five mountain peaks to each other through a set of roads and paths, contributing in provide a unique and distinctive experience to the public. The project, being designed to preserve the nature of the mountain environment to meet the need of the people, will be developed in several phases.

The project also includes in its upcoming stages about 1,000 residential villas that were designed in line with the nature of the mountain site, providing a distinct view of the coast of the city of Kalba and the valleys surrounding the project with the development of community services required for the residents.

The project will also include a five-star tourist hotel with a capacity of 80 rooms, with distinctive hotel services.

Then, His Highness went to inspect the proposed place for establishing honey reserves in Wadi Al Shua on the Kalba, Wadi Al-Hilu road. His Highness directed to develop it and enhance the intensification of density trees and agricultural production around it.

After that, His Highness the Ruler of Sharjah, also inspected the progress of work in the Al Hafiya rest house, which is located next to the new Al Hayar tunnel, including various service facilities such as a mosque, restaurants and public service buildings. Concluding the visit to the city of Kalba, His Highness the Ruler of Sharjah inspected also the Al Ghail Dam resting project, which overlooks a natural water body.

The project is divided into 3 sections, including the rest area, which consists of different services and facilities that serve the public’s needs, trailer parks, and the mountain hiking trail.

Representing a quantum leap for the development of the city, these projects will not only be an environmental tourism projects, but will also serve community members by providing appropriate job opportunities, introducing their cultural and literary treasures, and marketing their local products as a great source of income.

AL QASSIMI HOSPITAL RECEIVES ACCREDITATION IN AV BLOCK: Sharjah-based Al Qassimi Hospital has achieved accreditation as a centre of excellence in the treatment of Atrioventricular (AV) block from the Joint Commission International (JCI).

Dr. Yousif Mohammed Al Serkal, Director-General of the Emirates Health Services Establishment (EHSE), said, “The recent accreditation obtained by Al Qassimi Hospital, which is the latest in a series of achievements made by the hospital, is no more than a real implementation of the wise words of His Highness Sheikh Mohammed Bin Rashid Al Maktoum, Vice President, Prime Minister of the UAE and Ruler of Dubai, when he said, ‘The UAE’s achievements are great, and the progress of development and excellence will never stop.’”

“The UAE is the first in the globe in 110 indicators according to the most important global competitiveness reports, including the internationally accredited healthcare facilities index,” Al Serkal said.