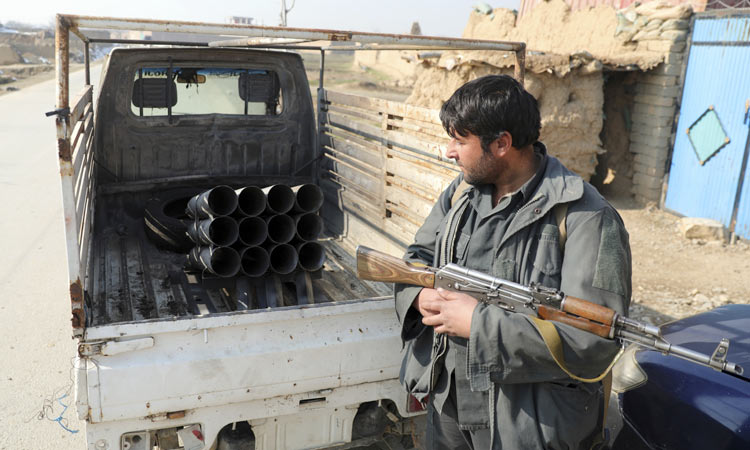 An Afghan security official stands near a vehicle in which rockets were placed, in Bagram, north of Kabul, Afghanistan. File/AFP

Two Taliban fighters who had infiltrated a base of pro-government Afghan militiamen killed 12 of them, officials and the insurgent group said on Saturday.

The night-time attack at a post manned by the militiamen occurred in the district of Ghorian in the western Herat province late on Friday, the governor for the district Farhad Khademi told AFP.

“Twelve pro-government militiamen were killed in the Taliban attack in Ghorian district last night,” he said.

Herat provincial council member Mohammad Sardar Bahaduri confirmed the attack and said it was carried out by two Taliban fighters who had infiltrated the base.

“The militiamen were dining when the attack happened,” he said.

The Taliban also said two of its fighters had carried out the attack and then returned.

In a separate incident, a vehicle carrying policemen was struck by a roadside bomb in the centre of the Afghan capital Kabul, police spokesman Ferdaws Faramarz told reporters.

Two policemen were killed and one wounded in the attack, he said.

Violence has surged across Afghanistan in recent months, especially in Kabul, which has been rocked by a new trend of targeted killings.

The bloodshed comes even as the Taliban and government negotiators engage in peace talks to end the nearly two-decades-long war in the country.

Representatives from two warring sides are currently in the Qatari capital Doha discussing the agenda for the talks.