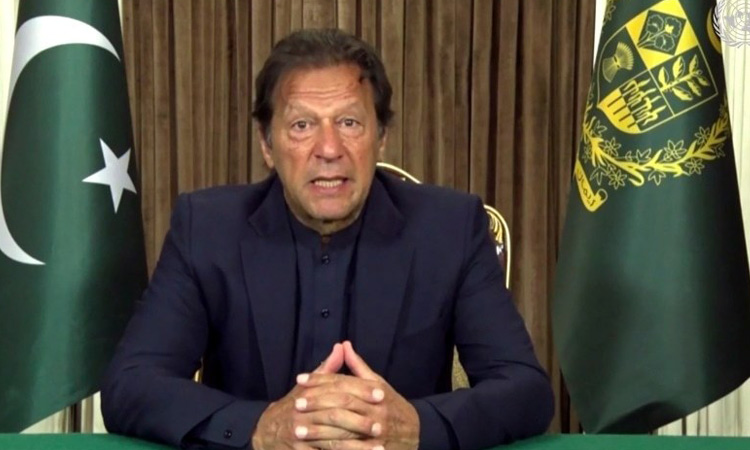 Prime Minister Imran Khan said on Wednesday that Pakistan wants complete transparency from the London-based assets recovery firm, Broadsheet LLC, on our elite’s money laundering and on who stopped (it from going ahead with its assignment).

Imran said they do money laundering to stash their ill-gotten gains abroad, safe from domestic prosecution. They then use their political clout to get NROs (amnesties). That is how they kept their plundered wealth safe. People of Pakistan are biggest losers, he said. 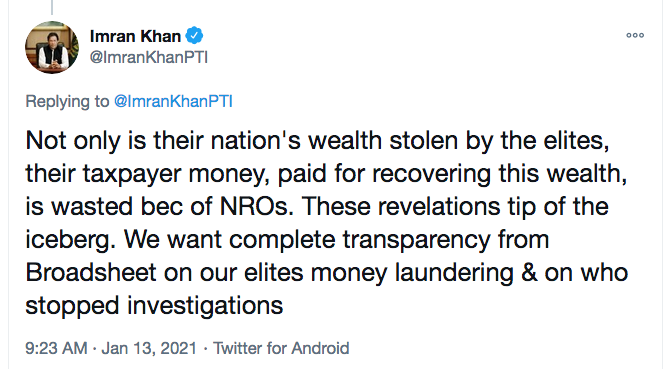 Not only is their nation's wealth stolen by the elites, their taxpayer money, paid for recovering this wealth, is wasted because of NROs. These revelations are the tip of the iceberg. Investigations, the prime minister said.

Meanwhile, the government has formed an inter-ministerial committee to probe the Broadsheet scandal. The development came after different interviews have come forth about the Broadsheet owner’s interview to a London-based web channel. 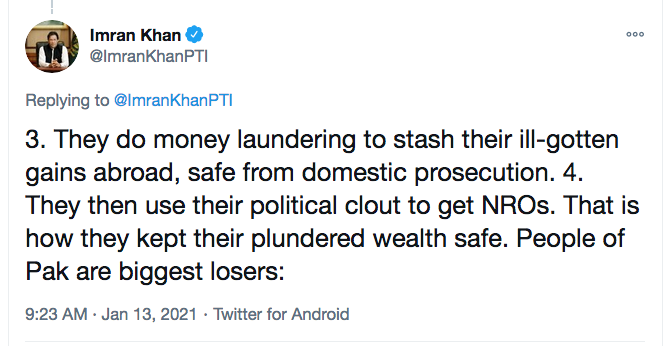 Information Minister Shibli Faraz said that the committee has been formed to further dissect the matter and added that the body would not only minutely probe the fine points of the case, but also determine how the national wealth was looted, and how the firm, after it had made important discoveries, was approached by someone said to be Nawaz Sharif's cousin to have the family's name removed from the matter after which the Broadsheet chief said, "We don't deal with crooks."

However, in a clarification Kaveh Moussavi later said that what he had talked about a man approaching him pretending to be representing Nawaz Sharif was just an allegation.

In the meantime, a parliamentary panel is poised to look into the payment of Rs4.5 billion Broadsheet by Pakistan as a penalty imposed by a London arbitrator. The 21-member National Assembly standing committee on foreign affairs, headed by Pakistan Tehrik-e-Insaf (PTI) member Ehsanullah Tiwana, will hold an in-camera meeting on Jan.18 to get briefings from the National Accountability Bureau (NAB) chairman and several other relevant figures.

Apart from the NAB chairman, the law and justice secretary, controller general of accounts and auditor general of Pakistan have been asked to personally attend the meeting. They have been urged to forward a soft copy of their respective briefs by email and 45 hard copies by regular mail, each in English and Urdu, for advance study of the members of the forum.

The panel will get a briefing on the British court's order to debit Rs450 crores (Rs4.5b) from the accounts of the Pakistan High Commission in London over the non-payment of the penalty by NAB to the foreign asset recovery firm, Broadsheet LLC.

Besides getting Rs4.5b from Pakistan, Broadsheet has also written to the NAB lawyers in London seeking an additional sum of $1,180,799.66, while confirming that it is in receipt of funds from United National Bank’s London branch for the sum of $28,706,533.34 in accordance with the terms of Deputy Master Lay’s order of Dec.17.

Broadsheet’s lawyers say this payment partially satisfies Justice Teare’s quantum and costs orders (sealed 25 October 2019 and 29 November 2019, respectively). However, pursuant to paragraph 3 of both orders, interest continued to accrue following the issue of Broadsheet’s Third Party Debt order and an additional sum of $1,180,799.66 had accrued prior to receipt of the funds from United National Bank.

While Pakistan has paid a whopping amount of foreign exchange to Broadsheet, NAB asserts that the firm has not made any worthwhile contribution to the recovery of looted money allegedly stashed abroad by Pakistan’s top politicians and others.