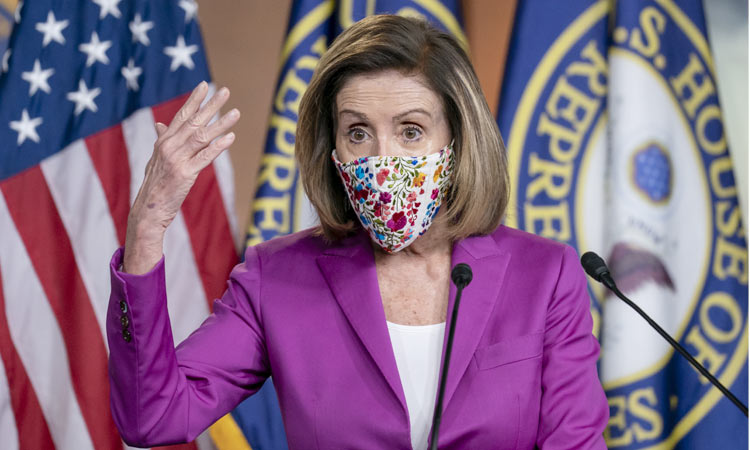 Speaker of the House Nancy Pelosi holds a news conference at the Capitol in Washington, US. File/AP

US House of Representatives Democrats plan a vote on Monday to urge Vice President Mike Pence to take steps to remove President Donald Trump from office after his supporters' deadly storming of the Capitol, before attempting to impeach him again.

House Speaker Nancy Pelosi said on Sunday the House will proceed with legislation to impeach President Donald Trump as she pushes the vice president and the Cabinet to invoke constitutional authority force him out, warning that Trump is a threat to democracy after the deadly assault on the Capitol.

The plan, spelled out by House Speaker Nancy Pelosi in a letter to members on Sunday evening, came as Washington struggles to decide what to do about Trump in the 10 days before Democratic President-elect Joe Biden is sworn in on Jan. 20. 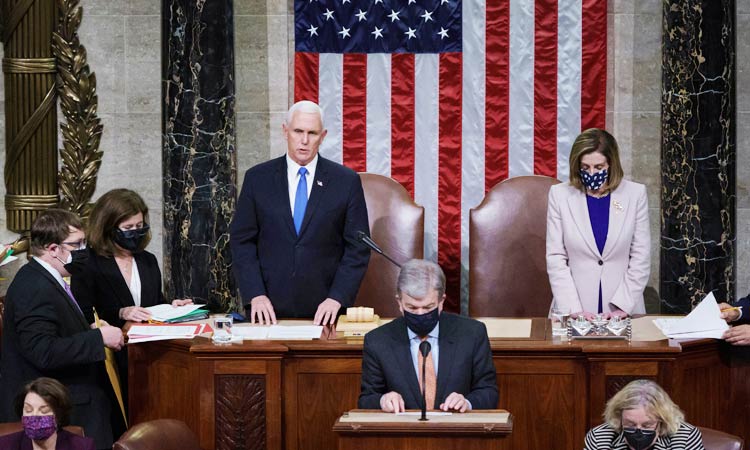 Pence and Pelosi read the final certification of Electoral College during a joint session of Congress at the Capitol in Washington. File/Reuters

Officials have opened at least 25 domestic terrorism investigations into Wednesday's assault on the US Capitol, a top military officer told lawmakers, according to a House Democrat. Five people died in the rampage through the seat of government by Trump's backers after a fiery speech denouncing the Nov. 3 election results by the Republican president.

The House action could start as soon as Monday as pressure increases on Trump to step aside. A Republican senator, Pat Toomey of Pennsylvania, joined Republican Sen. Lisa Murkowski of Alaska in calling for Trump to “resign and go away as soon as possible.”

A stunning end to Trump’s final 10 days in office was underway as lawmakers warned of the damage the president could still do before Joe Biden was inaugurated Jan. 20. Trump, holed up at the White House, was increasingly isolated after a mob rioted in the Capitol in support of his false claims of election fraud.

If Pence does not respond, Democrats would proceed with impeaching the president for a historic second time.

"In protecting our Constitution and our Democracy, we will act with urgency, because this President represents an imminent threat to both," Pelosi said in the letter. 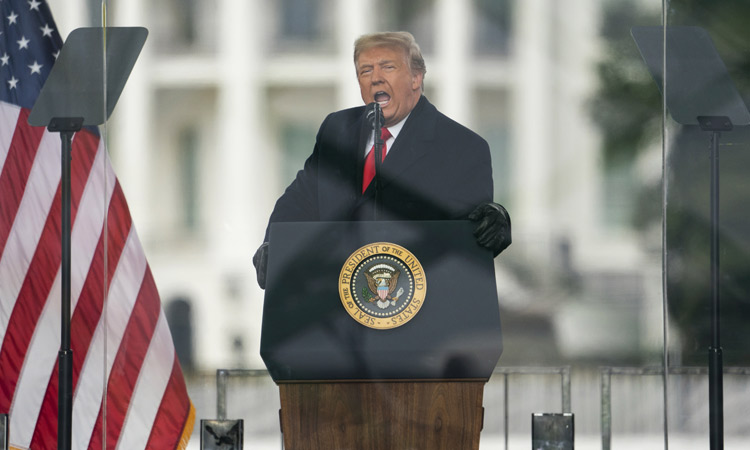 President Donald Trump speaks during a rally protesting the electoral college certification of Joe Biden as President in Washington. File/AP

On Monday, Pelosi’s leadership team will seek a vote on a resolution calling on Vice President Mike Pence and Cabinet officials to invoke the 25th Amendment, with a full House vote expected on Tuesday.

After that, Pence and the Cabinet would have 24 hours to act before the House would move toward impeachment.

During an interview on “60 Minutes” aired on Sunday, Pelosi invoked the Watergate era when Republicans in the Senate told President Richard Nixon, “It’s over.”

“That’s what has to happen now,” she said.

With impeachment planning intensifying, Toomey said he doubted impeachment could be done before Biden is inaugurated, even though a growing number of lawmakers say that step is necessary to ensure Trump can never hold elected office again.

“I think the president has disqualified himself from ever, certainly, serving in office again,” Toomey said. “I don’t think he is electable in any way.”

Murkowski, long exasperated with the president, told the Anchorage Daily News on Friday that Trump simply “needs to get out.” A third, Sen. Roy Blunt, R-Mo., did not go that far, but on Sunday he warned Trump to be “very careful” in his final days in office.

House Democrats were expected to introduce articles of impeachment on Monday. The strategy would be to condemn the president’s actions swiftly but delay an impeachment trial in the Senate for 100 days. That would allow President-elect Joe Biden to focus on other priorities as soon as he is inaugurated Jan.20.