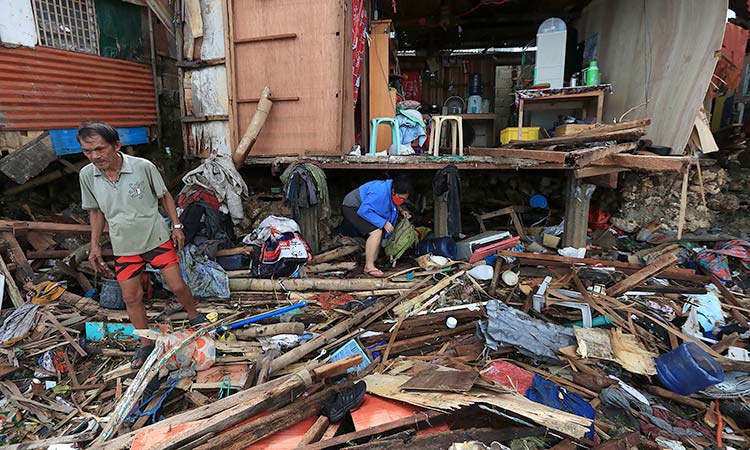 At least eight people were killed and thousands forced to flee their inundated homes in the Philippines as torrential rain triggered flooding and landslides in the storm-battered archipelago, officials said on Sunday

Nearly 10,000 people were evacuated from their homes in the northeastern Philippines, authorities said.

Mayor Junard Chan said on Facebook that huge waves smashed into a coastal village on Lapu-Lapu island in the central province of Cebu on Friday night, wiping out dozens of houses and leaving around 290 people homeless.

Photos posted online by the mayor showed piles of wood and bamboo near the few houses still standing after the region was drenched by heavy rain.

The storm — which has inundated villages and destroyed scores of houses in recent days — is the latest to batter the disaster-prone archipelago.

Floodwaters reached waist-deep in 14 towns in the Cagayan Valley in the northeast of the main island of Luzon -- which saw the worst flooding in decades last month -- regional civil defence officer Francis Joseph Reyes said.

The rain, which was intensified by the northeast monsoon, has filled Magat dam near to its critical level and the release of water threatens to aggravate the flooding, Reyes said.

Authorities said at least six people drowned in two provinces on the major southern island of Mindanao, which was also hit by torrential rain in recent days.

Two elderly women were also killed in a rain-induced landslide on Saturday in the central province of Leyte.

The Philippines is hit by an average of 20 storms and typhoons every year, which typically wipe out harvests, homes and infrastructure in already impoverished areas.

At least 148 people were killed in a succession of typhoons in recent months that destroyed hundreds of thousands of houses.