I will quit but won’t give amnesty to opposition leaders, says Imran - GulfToday 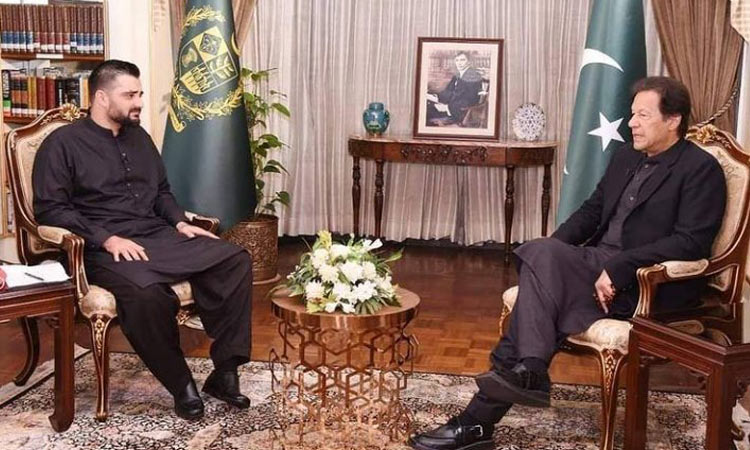 Prime Minister Imran Khan says he will give up his office but will not give any NRO (amnesty) to the “union of crooks” — the opposition leaders.
In an interview to a TV channel, he covered a myriad of topics, including his own spiritual journey and his thoughts on Western culture.

Imran said the opposition parties have been blackmailing the government since day one to grant them amnesty. He said that the NRO given to the opposition by former military ruler (retd) Gen Pervez Musharraf had had disastrous effects on Pakistan, leading to an increase in debt liabilities. "Our biggest problem is that we have debt and there is a deficit between what we earn and what we spend."

He added that the opposition wanted to be "forgiven," but said that even the Holy Prophet Muhammad (Peace Be Upon Him) had said he would not forgive his daughter when it came to corruption. "If I want to let them go, then I should open up our jails," he said, adding that he would "give up his seat but not give the opposition an NRO."

About the upcoming rally of the multiparty opposition alliance, the Pakistan Democratic Movement's (PDM) in Lahore on Dec.13, the premier said that the government has decided to not grant them permission for staging the demonstration. "FIRs will be registered against those putting up the sound systems and chairs."

Corrupt civil servants will be fired not transferred, warns Imran

However, the prime minister said that the government would not stop the opposition from participating in the rally. "We will not stop them so that they can't [act] dramatic and assume the role of revolutionaries and try to become Joan of Arc or Che Guevara."

He said that the government had cancelled its rallies and public gatherings after the country witnessed an uptick in COVID-19 cases. "We have once again started stressing on standard operating procedures (SOPs) for curbing the spread of the virus. But if this union of crooks thinks that this public meeting will put pressure on me, then they are wrong. No one has organised rallies as big as the Pakistan Tehrik-e-Insaf (PTI)."

He said that he will leave the office of prime minister but will never betray the country by giving relief to the opposition.

About many issues being faced by Karachi, Imran said the situation is very strange. "Parties win votes from interior Sindh and come into power in the province. So they only focus their energies on the vote bank in interior Sindh and Karachi is left behind."

He said that the federal government had announced the Karachi Transformation Plan to address the immediate issues being faced by the city and its residents. "We don't have the powers. The money from the federal government goes to the province and they decide where to spend it. But the transformation plan is exclusively for the city and all stakeholders are working on it together."

The premier said that a permanent solution for cities such as Karachi would be a local government system. "Until it becomes a self-sustaining city, money allocated under the Public Sector Development Programme will never be enough."

He touched on the two biggest problems being faced by the country, namely fiscal debt and diminishing exports. He said that unless we make people pay their taxes, we can never become a modern country. "We are among those nations that give the littlest amount in taxes."

He said that when the government checked the data of the country's tax payers, it discovered that there are 2.5 crore people who don't pay taxes. He added that diminishing exports were another problem the country was facing. However, now the country's trajectory was changing due to the efforts made by the government, he said.

"For the first time now after the 1960s, we are going towards industrialisation," he said, adding that this was key to making the country stand on its own two feet. If we just fix our tourism sector, we can earn a significant amount. Our northern areas are Switzerland plus," he said, adding that Pakistan has more religious tourism than Malaysia. "You have no idea the resources this country has been blessed with. But the problem is that we don't have any money so we have to carry out joint ventures."

According to Prime Minister Office, the portfolio of finance minister has been given to Dr Abdul Hafeez Shaikh while Azam Khan Sawati appointed as railways minister and Brigadier (read) Ijaz Ahmad Shah as minister for narcotics control.