Looking to the future with optimism is the Emirati way: Khalifa - GulfToday 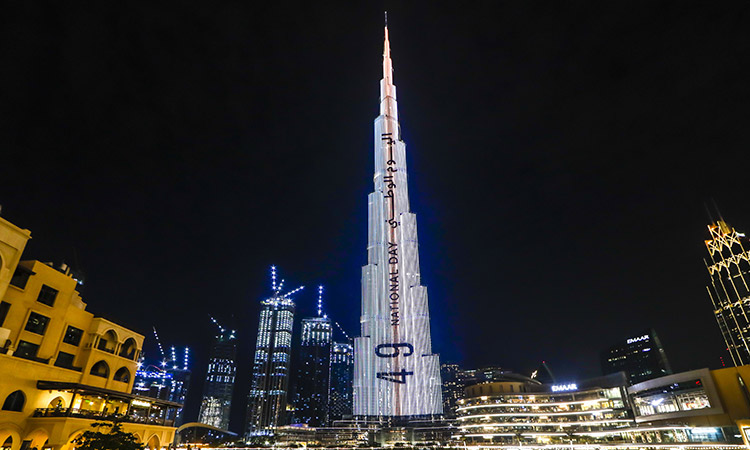 Burj Khalifa lights up ahead of 49th UAE National Day.

President His Highness Sheikh Khalifa Bin Zayed Al Nahyan has called on the people of the UAE to look to the future with optimism and contribute with ideas and visions that will help the country achieve further progress across all sectors. 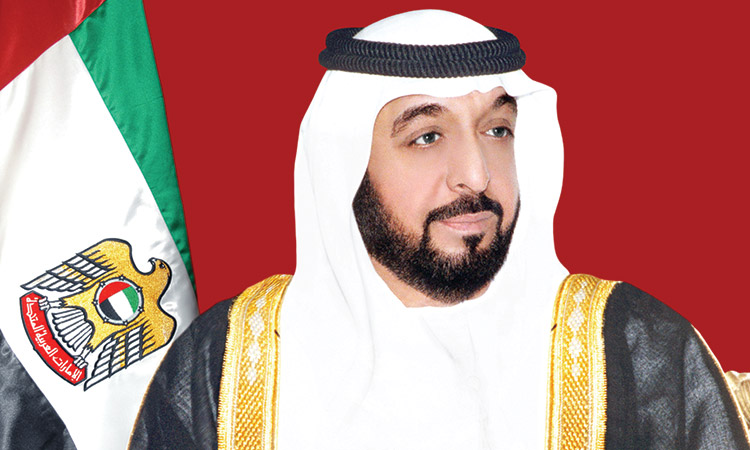 On the occasion of the UAE's 49th National Day, President His Highness Sheikh Khalifa, in a statement to Nation Shield, the UAE Armed Forces magazine, said that while the nation prepares to celebrate its Golden Jubilee in 2021, the nation's sons and daughters should be ready to welcome the next 50 years with future visions "that will prepare our country for more development across all sectors, so that by year 2071, the UAE will become the first in the world in global indicators for well-being, happiness and quality of life."

"Looking to the future with optimism, anticipating its horizons, and pre-planning its paths is an authentic Emirati approach," he added.

The President also paid tribute to the nation's frontline workers in their fight against the coronavirus pandemic in 2020. He said, "We extend our deepest appreciation to the dedicated workers; for a crisis well managed, for a decisive handling of the pandemic, for the preservation of the nation's security, for the protection of its economy, for safeguarding the wellbeing of its community, and for ensuring the continuity of the educational process."

Addressing the nation's citizens, His Highness said, "I, and on behalf of my brothers, Their Highnesses the Supreme Council Members and the Rulers of the Emirates, deeply congratulate you as you welcome the new year with great optimism, a year that will conclude with the Golden Jubilee of the declaration of our Union; while preparing at the same time to welcome the next 50 years with future visions that will ready our country for more development across all sectors. Therefore, by year 2071, the UAE will become the first in the world in global indicators for well-being, happiness and quality of life. 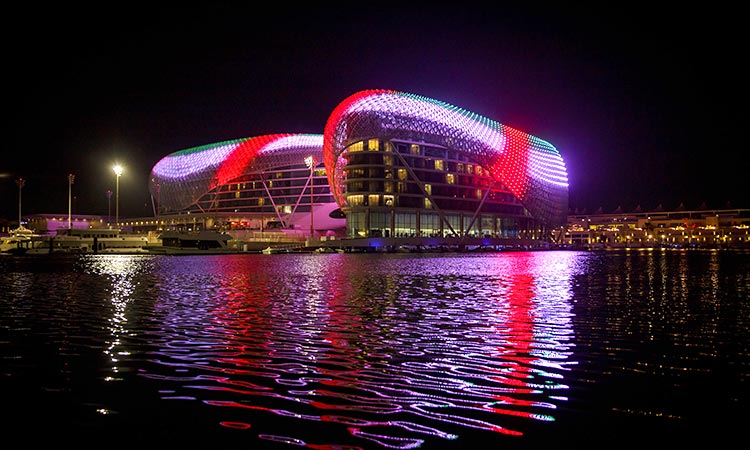 "Looking to the future with optimism, anticipating its horizons, and pre-planning its paths is an authentic Emirati approach for which the late Sheikh Zayed Bin Sultan Al Nahyan laid the foundations with his brothers, the Founding Fathers," he added.

President Khalifa expressed pride in the achievements of the UAE as it celebrates the 49th anniversary of its establishment, saying the country serves as a "model" for progress and sustainable development and sets an example with its values of tolerance, coexistence, openness and rejection of hatred; as well as for the justice, equality, security, well-being and prosperity it provides to its citizens.

His Highness stressed that building the future is paramount and that creating a successful future requires a clear vision, an early anticipation of opportunities and challenges, and the courage in decision-making.

As part of "our project for designing the next 50 years, some of the decisions we took included the renaming of ministries, merging some, and creating new ones," he explained, in addition to appointing state ministers to focus on areas of utmost importance for the future; which include government development, scientific research, advanced technology and artificial intelligence, smart systems and the digital economy.

Other areas the President said the country is focusing on developing the applications that support remote work, renewable energy, food security, women empowerment and youth protection, as well as nurturing a future generation of qualified Emiratis, and attracting high-calibre foreign talent.

His Highness said the country has taken "accelerated steps" in the fields of nuclear and renewable energy by operating the Barakah plant for the production of peaceful nuclear energy. Furthermore, the UAE has also secured a leading position in the space sector by launching Hope Probe to Mars, the President said, "as we also set out to build future frameworks for health, education, infrastructure, energy, transportation, services, and entrepreneurship." 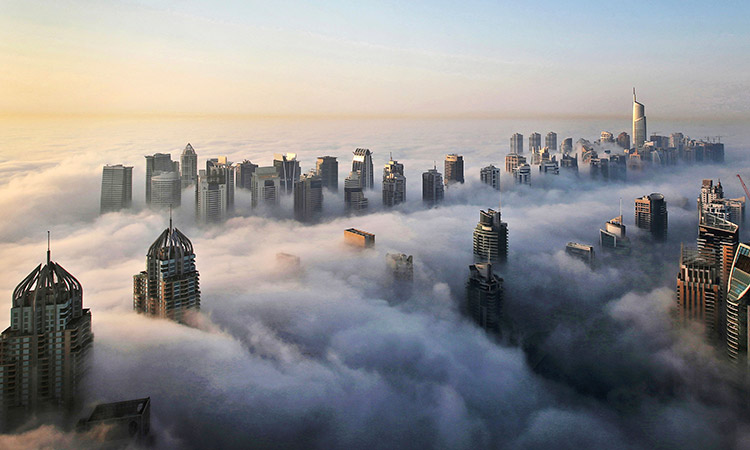 UAE's programmes are sustainable that will remain guided by Emirati society and its virtues.

On the UAE's response to the COVID-19 pandemic, His Highness said 2020 was an exceptional year that brought many challenges, most difficult of all was the outbreak of the COVID-19 pandemic. Yet, the UAE, through its strict precautionary measures and an effective national sterilisation programme, was successful at controlling the spread of the virus; and was able to offer medical care and protection to its citizens, residents and visitors alike.

His Highness said that despite the significant losses in life and finances, the pandemic has revealed "the efficiency of our healthcare system, how highly prepared our country is in the face of emergencies and crises, and confirmed the readiness of the country's information and communication technology infrastructure," which enabled the nation to move easily towards remote work and education.

"In this respect, we extend our deepest appreciation to the dedicated workers; for a crisis well managed, for a decisive confrontation of the pandemic, for the preservation of the nation's security, for the protection of its economy, for safeguarding the wellbeing of its community, and for ensuring the sustainability of the educational process," he said.

In regards to the country's political development, President Khalifa said the UAE has "succeeded in making remarkable achievements" in people's empowerment, raising the levels of participation and strengthening the role of the Federal National Council by increasing the representation of both women and youth.

"The UAE's Political Empowerment Programme is a sustainable one that will remain guided by Emirati society and its virtues," he said.

On the country's economic achievements, the President said those were reflected in a number of global competitiveness indicators that highlighted the "resilience of our economy and its high ability to confront economic shocks and fluctuations, as well as global challenges."

This was made possible, His Highness added, thanks to an economy that boasts a number of components, most notably: a successful economic diversification policy, large investment assets, wide trade relations, diversified exports, and even more importantly, empowered individuals who are capable of giving and free to create ideas and enterprises.

On community welfare and stability, His Highness said, "We have succeeded in establishing a health care system of global standards, a high-level educational system, community development programmes, distinguished social care, nationwide housing projects, an integrated infrastructure, a sustainable environment... and other remarkable achievements that have enabled us and our people to successfully surpass the stage of empowering to begin creating the next 50 [years]."

"The government views Emiratisation "as a true measure for success", but clarified, "By Emiratisation, we do not mean the mechanism for employing nationals, but rather a tool for enabling."

Sheikh Khalifa also pledged to settle the financial obligations of the released prisoners. The pardon comes within the framework of keenness of the UAE President to give the prisoners a chance to start a new life, and alleviate the suffering of their families.

We're ushering in next 50 years with a comprehensive, well-thought-out strategic vision: Sheikh Khalifa

The past fifty years of the country’s history, His Highness continued, have fructified into a myriad of achievements, including sustainable development, political stability and security, a government that is among the most efficient in the world.