‘America is back,’ says Biden as he presents team - GulfToday

‘America is back,’ says Biden as he presents team 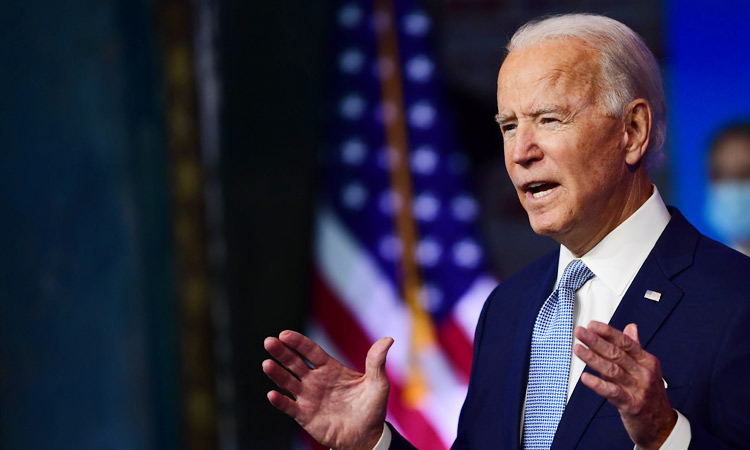 President-elect Joe Biden on Tuesday introduced a slate of veteran diplomats and policy-makers who will make up his national security and foreign policy team, saying: “America is back, ready to lead the world.”

“These public servants will restore America’s global leadership and moral leadership,” Biden said as the six men and women stood behind him wearing face-masks.

Biden said that after he is inaugurated on Jan.20 and Donald Trump leaves the White House, the United States will “once again sit at the head of the table, ready to confront our adversaries and not reject our allies.” 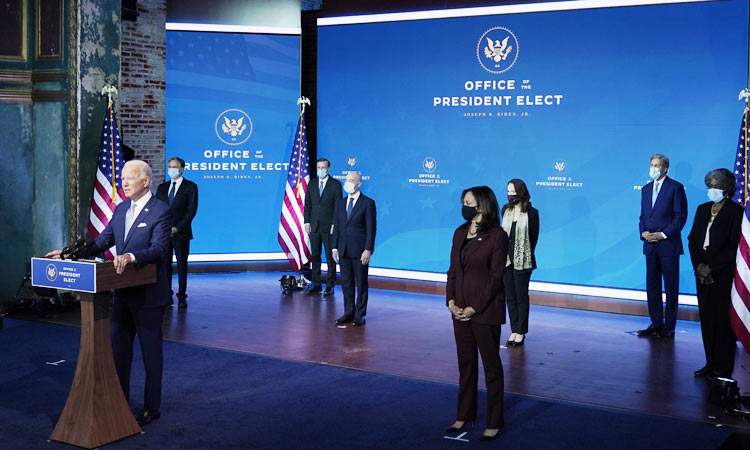 “It is a team that reflects the fact that America is back, ready to lead the world, not retreat from it,” he said in a jab at President Trump’s go-it-alone “America First” policies.

Biden’s remarks came after Trump suffered further setbacks in his efforts to overturn the results of the election with unsubstantiated claims of fraud.

Pennsylvania and Nevada certified the Nov.3 election results on Tuesday, a day after the state of Michigan did so, a move which triggered the General Services Administration (GSA) to launch the transition process.

As more members of his Republican Party came out demanding an end to the impasse, Trump signed off on the GSA move, effectively admitting defeat.

But the president on Tuesday tweeted a picture of himself in the Oval Office with the caption “I concede NOTHING!!!!!”

He appeared to indirectly address the election, saying: “I say America First — shouldn’t go away from that.” 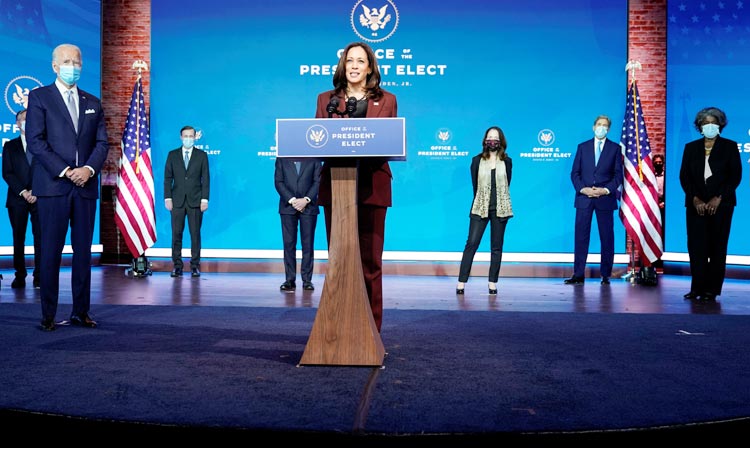 The GSA determination gives Biden access to classified information and will allow his aides to coordinate with officials on addressing the worsening coronavirus pandemic.

“We’re already working out meeting with the Covid team in the White House... The outreach has been sincere,” Biden told NBC in his first TV interview since winning the presidency.

Biden said that in his first 100 days in office he would tackle the Covid crisis, scrap Trump policies “damaging” the environment and push legislation offering millions of undocumented residents a route to citizenship.

And he said he wanted to get all students back in classrooms, despite the huge cost of adapting schools to be Covid-safe.

The slate that Biden unveiled included veterans of the Barack Obama administration and signaled a return to traditional US diplomacy and multilateralism.

Biden said that “America’s going to reassert its role in the world and be a coalition builder,” but he denied it would be like a third term of Obama — whom he served as vice president.

Antony Blinken, Biden’s choice for secretary of state, said the United States cannot solve global problems on its own.

“We need to be working with other countries,” the former State Department official said.

However, outgoing Secretary of State Mike Pompeo denounced Biden’s call for greater international cooperation, saying that Trump had been focused on “real results” and “the reality on the ground.”

“More multilateralism for the sake of hanging out with their buddies at a cocktail party? That’s not in the best interest of the United States,” Pompeo told Fox News.

Pompeo said he had not spoken to Blinken but would “do everything that’s required by law” as part of the transition.

Former secretary of state John Kerry, who Biden chose as his special envoy on climate change, confirmed that the United States will rejoin the Paris climate accord which Trump pulled out of in 2015.

Cuban-born Alejandro Mayorkas was named to head the Department of Homeland Security, whose policing of tough immigration restrictions under Trump was a frequent source of controversy.

Avril Haines was nominated to be the director of national intelligence, the first woman to hold the post, while Jake Sullivan was named national security advisor.

Former Federal Reserve chairwoman Janet Yellen is expected to be named Treasury Secretary, the first woman to hold the job.

With Biden having won a comfortable victory, Trump’s last card is to try to disrupt the normally routine process of state-by-state certification of the vote and challenge election results in the courts with claims of irregularities.

The legal offensives have failed so far, however, along with the attempts to delay state certification.

“The Trump campaign’s legal efforts have no basis in fact, no basis in law,” said Bob Bauer, a senior advisor to the Biden campaign. “Their only purpose is to delay the inevitable.