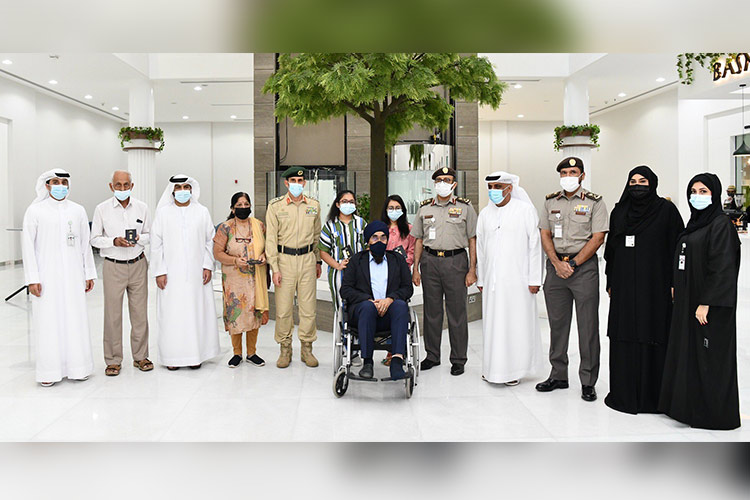 The girls pose with their grandparents and officials in Dubai.

Two Indian orphan girls and their grandparents have been granted UAE’s 10-year Golden Visas on humanitarian grounds. Girls lost their parents in a criminal incident.

Orphan girls and their grandparents are also provided with accommodation to ensure that they enjoy a stable family environment and pursue their studies and obtain higher degrees.

The Dubai Police collaborated with GDRFA to issue the golden visas for the girls and their grandparents following efforts exerted by the CID's Victim Support Programme in cooperation with the General Department of Administrative Affairs.

The collaborative efforts led to bringing the orphan sisters along with their grandparents from their home country to the UAE.

Al Marri handed over the golden visas to the two sisters and their grandparents, when he received them at the GDRFA’s general headquarters, in the presence of Major General Khalil Ibrahim Al Mansouri, Assistant Commander-in-Chief for Criminal Investigation Affairs.

On the occasion, Al Marri said: "Granting the two golden visas to the orphan sisters is in line with the humanitarian approach embraced by the UAE’s wise leadership to ensure the happiness of all community segments in the UAE, as a haven of happiness to all community members."

Al Marri noted that the Dubai Police in collaboration with the GDRFA contributed to drawing a smile on the faces of the girls and their grandparents through this outstanding humanitarian initiative.

He also highlighted keenness of Dubai Police to launch community and humanitarian initiatives in cooperation with its strategic partners to contribute to the happiness of community members.